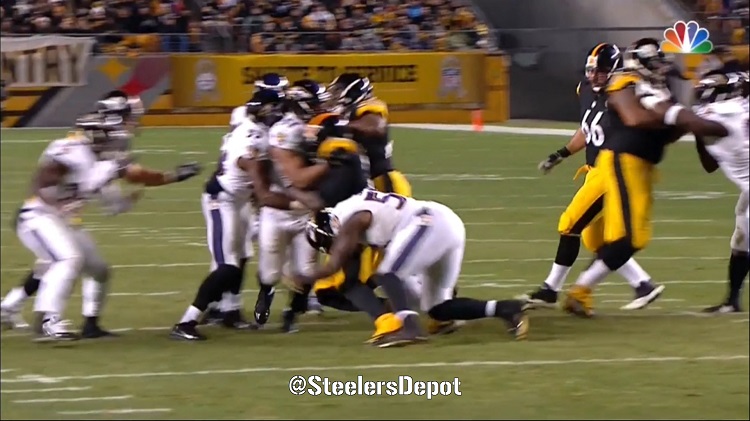 Baltimore Ravens linebacker Terrell Suggs took a cheap shot at the legs of Pittsburgh Steelers running back LeGarrette Blount late in the third quarter of the Sunday night game and the move didn’t surprise the veteran ball carrier one bit.

“I don’t know what (Suggs) was doing,” Blount said after Pittsburgh’s 43-23 win over the Ravens, according to The Baltimore Sun. “I don’t know what he was thinking. He’s known to be a dirty player. As long as he does that he’s going to continue to have people come after him and do whatever we did to get in his head.”

As for Suggs, he predictably shrugged off his actions after the game.

“He was running, he was still up and he was moving the pile,” Suggs said. “I assessed the play, and that was the only way I could get him down without him gaining more yards. I wasn’t trying to get him hurt. I was just trying to get the big guy down.”

Suggs was flagged for unnecessary roughness on the play and there’s no doubt he’ll be fined by the league come Wednesday.

Thankfully Blount wasn’t seriously injured on the play as the attempted hit to his lower extremities could have easily wound up ending his season.

Suggs didn’t play overly well Sunday night and while he did record three total tackles in the game, all three came in the fourth quarter with the Steelers up big.

The Ravens suffered their fourth loss of the season Sunday night and they now sit at the bottom of the AFC North division with three divisional losses.