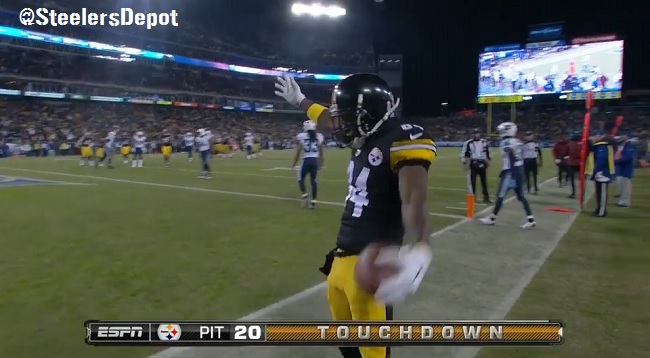 A week ago, Pittsburgh Steelers wide receiver Antonio Brown was a big reason for the team dropping an important game to the then 1-8 New York Jets.

He robbed the offense of two possessions, first by fumbling on the first play of a drive on a screen pass near the line of scrimmage, and then he muffed a punt that the Jets also recovered deep in Steelers territory. While the latter ended in a missed field goal, the Jets capitalized on the first turnover with a touchdown to take a 17-0 lead.

Those were his first turnovers all season—his first turnover since 2012, in fact. He clearly beat himself up over his performance, even though he still finished the game with an otherwise respectable eight receptions for 74 yards.

That was a somewhat ho-hum game for Brown in 2014, however, who came into the game averaging almost nine receptions and 111 yards per game. He turned in an All-Pro campaign in 2013 in his first year as the team’s top target, and he’s only raised the bar this year.

But the Steelers desperately needed their superstar wide out to put that game in his rearview mirror and move past it in order for the offense to move on, and he did, repeatedly coming through with big receptions on third down and reeling in the game-winning touchdown midway through the fourth quarter on Ben Roethlisberger’s only touchdown throw of the game.

That touchdown was his ninth—as a receiver—this season, which set a new career-high, surpassing the eight touchdowns that he caught in 2013. He also threw a touchdown pass to Lance Moore a few weeks ago.

Brown no doubt is headed for another All-Pro trip, this time for the first-team list. He has a commanding lead in receptions with 88 on the year, and his 1161 receiving yards are 56 more than the next-closest—Demaryius Thomas—as one of two receivers who have topped 1000 yards.

Of course, Brown’s numbers come as one of few remaining players who have not yet had their bye weeks, so others will gain ground. Thomas actually has a five-yard advantage over Brown in terms of yards per game.

Brown’s nine touchdowns, however, are tied for third-most league-wide, and second among receivers, with only Randall Cobb having more. Tight end Julius Thomas’ 12 receptions lead all players.

All of this has come without stability throughout the rest of the receiving corps as the Steelers were forced to replace two of their top receivers from a year ago on the fly. They have already cycled through Justin Brown, Moore, and now Martavis Bryant as the third option, while Markus Wheaton has been coming on and off the field in recent weeks as the other outside receiver.

Brown is on pace to have the best season a Steelers wide receiver has ever had, surpassing the records for receptions, yards, and touchdowns. His pace for 128 receptions (112), 1689 yards (1499), and 13 touchdowns (12) would all be franchise bests.