The Pittsburgh Steelers seem likely to call upon the services of tackle Mike Adams to start for the first time this season after taking over the right tackle position in the second quarter of Monday’s game against the Houston Texans.

Starting right tackle Marcus Gilbert suffered a concussion during the game after just 19 snaps, leaving the 2012 former second-round draft pick to mop up the remaining 48. It was the first opportunity for the Steelers to see Adams in a meaningful game under the tutelage of new offensive line coach Mike Munchak.

Although there were some moments, the overall results were uneven, but perhaps a week of preparation as a starter will help get him ready for the Colts.

Midway through his first drive in the game, Adams got handled by J.J. Watt on an inside move, slapping the tackle’s left arm with his right while swimming his left arm over the top for easy penetration. The result was a hit on the quarterback, despite a completed pass.

Watt got the better of him again two plays later, this time attacking the outside. The defensive end used his impressive reach to work Adams back into the pocket with his right arm before attacking late with a swim move.

With David DeCastro coming over to assist, the result was Adams getting pancaked. Ben Roethlisberger was forced to rush the throw, which induced a low delivery and an incomplete pass. 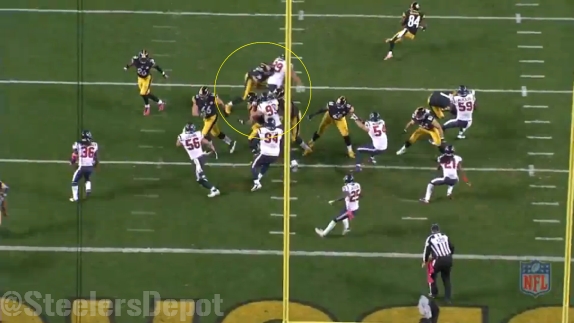 Late in the first half, after the Steelers recovered a fumble on the Texans’ three-yard line, they were able to score on first and goal on a gadget play with a receiver throwing the ball, but not without incident. Adams was beaten once again by Watt, again with an inside swim move, and gave chase to Antonio Brown, but fortunately the receiver was quick enough to escape and get the pass off.

Of course, pass protection—it’s no secret—has never been Adams’ specialty. And it’s no surprise that the Texans seemed to hang Watt over the offensive right side more consistently with Adams in the game.

But that doesn’t mean it was all bad. In fact, his first snap against Watt in the second half was not bad at all. With the run designed to go left, Adams turned quickly and walled off the defensive end in that direction, but when Le’Veon Bell cut back across the formation, he pursued Watt to make sure he would not make the play.

This run blocking effort for LeGarrette Blount late in the third quarter was less successful, but the issue here was not sticking with the play and allowing Watt to come back and get in on the tackle. His initial effort was good, but he was satisfied once he felt his assignment was out of harm’s way. It’s a foolish proposition against a player who has a motor like Watt, but it should never be done. He gestured to his fellow linemen after the play in a manner suggesting understanding of what he did wrong in that instance.

On the next snap, the Texans moved Watt to the other side of the field and put Whitney Mercilus against Adams. He shed the big lineman easily, dropping Dri Archer for a two-yard loss in the process.