Pittsburgh Steelers tight end Matt Spaeth logged 25 or more snaps for only the second time this season on Monday against the Houston Texans—but despite the dominant rushing performance against the Panthers, his individual effort in the last game was certainly his best of the year thus far.

That included a good deal of success going up one-on-one against J.J. Watt, as on this late rush in the first half. The Steelers showed a run formation to the left with Spaeth on the line and Heath Miller immediately to his outside shoulder.

Lined up across from Watt, Spaeth worked inside off the snap, combating the defensive end’s swim move that knocked him to a knee by driving him down along with him. Quickly regaining his feet, the tight end continued to drive Watt well out of the play and made him a non-factor on his own.

The Steelers opened the second half again in a two tight end set, with Spaeth on his own on the right side of the offensive line. The run was supposed to go to the left, but Le’Veon Bell cut back to the right. The tight end was assisting Mike Adams with Watt while monitoring linebacker Brooks Reed.

As Bell cut back in his direction, Spaeth abandoned Watt and followed Reed moving inside, where he hit him with a cut block that allowed Bell to work off right tackle for a short gain.

On the following play, the offense went to a heavy run look with three tight ends on the right side. Spaeth was closest to the line and blocking Watt. Instead of running the ball, Ben Roethlisberger dropped back to pass.

Watt hoped to beat the double team of the tight end and right tackle by going outside of Spaeth, but the tight end responding by driving him out of the lane and pushing him down.

The tight end found similar success in pass protection against Reed rushing to the outside on the deep ball near the Steelers’ goal line targeted for Martavis  Bryant that he nearly climbed up the back of a cornerback to catch. 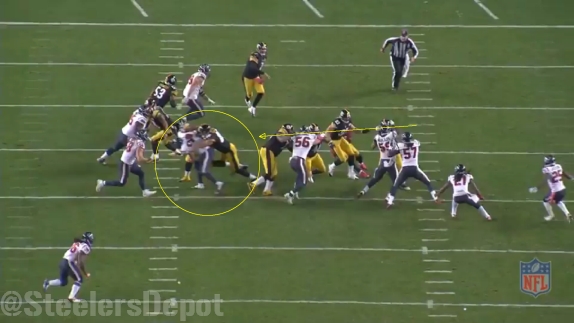 Success as a run blocker, however, is where Spaeth is supposed to specialize, and that was the case in this game, and on this play, two plays after the aforementioned on first down. It was another heavy run look with Spaeth and Will Johnson on the left side and Miller on the right ready to pull.

The tight end’s assignment was to take care of defensive end Jared Crick, which he did with ease, with an assist from Kelvin Beachum, as the two drove him across the formation to the right and out of the play.

In the fourth quarter, Spaeth threw a key block on Bell’s long run of the day, a 20-yarder off the left side. It was once again a run-heavy look with two tight ends to the right, with Miller and David DeCastro set to pull from the right. Spaeth and Beachum not only once again took care of Crick, he also made sure to get a piece of the pursuing linebacker to assure that Bell had only to secondary to worry about.