Pittsburgh Steelers running back Le’Veon Bell ranks second on the team in yards through the air, as well as receptions. Only Antonio Brown and Lance Moore have more touchdown receptions.

Yes, it’s fairly easy to deduce that, contrary to the team’s history, their starting running back has become their second option in the receiving game.

As a matter of fact, Bell’s 36 receptions on the year rank not only second on the Steelers, but 18th in the entire league. With a few repeating teams ahead of him, that means that Bell has more receptions than anybody on more than half of the teams in the league.

Bell had the best receiving game of his career on Monday against the Houston Texans, the damage all taking place in the first half, when he recorded six receptions for 91 yards and a touchdown. He actually gained a net of minus three yards on two receptions in the second half when he was tackled for a loss of six on a toss from Ben Roethlisberger aimed simply to avoid a sack.

The fun got started early in the game when Roethlisberger looked his way on third and five to start the game. He motioned out of the sidecar on the right side to slot left, where the safety followed him. Bell sat down at the sticks and secured the ball for the first down, despite the fact that the safety was on him before the ball had even arrived.

The call was to Bell again, or rather an improvisation, two plays later, as J.J. Watt beat David DeCastro inside for pressure. The back slipped through the middle of the line where Roethlisberger was able to hit his release valve before getting hit himself. Brian Cushing was there, waiting, but Bell spun out of his tackle attempt, leaving him on the ground as he picked up 10 yards in the process. 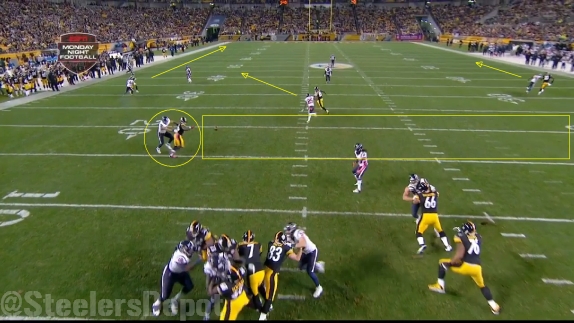 Late in the first half, the Steelers found themselves backed up deep in their own territory, facing a third and 10, while trailing by a score of 13-0. The crowd was already eliciting a chorus of boos and needed just one more prod to explode with contempt.

Which is when Roethlisberger found Bell cutting in front of Cushing with a wide open lane to the outside in front of him. Rushing linebacker Brooks Reed was able to walk Heath Miller back into the quarterback as he threw, but Roethlisberger got the ball off in time. With three receiving tearing down the field to chase the coverage away, Bell had all day to run.

That play helped set up the Steelers’ first score, and this helped set up the second. It was a simple screen pass with Maurkice Pouncey as the lead blocker, but the way Bell was able to set up his own block to evade the charging safety is something special. The next play was a 35-yard touchdown pass. 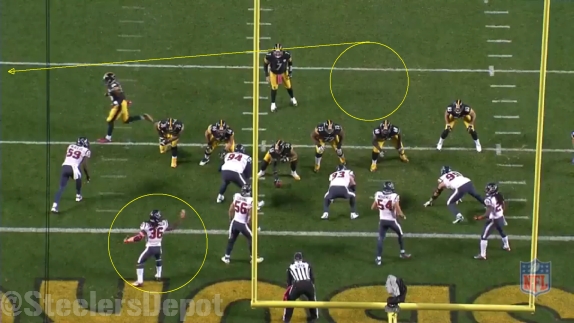 But Bell finally got a touchdown pass of his own to end the first half and cap off an exceptional two quarters as a wide receiver. He motioned out from the backfield to wide right, and the safety was slow to respond.

Knowing the safety would be coming after initial confusion, Roethlisberger was sure to place the ball where only his receiver could get it. Though it force Bell to adjust, he came back and caught the ball placed behind him, showing the hands of a wide receiver while doing so.