Pittsburgh Steelers inside linebacker Lawrence Timmons got his Monday night off with a missed tackle—his first clear missed tackle in five weeks—but from that point on, it was the usual quality run-stuffing that he has been most known for as a starter in Pittsburgh.

After a bit of vomiting, of course.

He even managed to provide contributions other than tackles, including his first sack of the season, plus an assist on an interception after Brett Keisel’s batted pass ricocheted off Timmons’ helmet and back into his grip.

After the Steelers nearly forced a three-and-out on the Houston Texans’ opening drive, it started to going downhill quickly from there on out, starting with this missed tackle from Timmons on the fourth play of the game.

The Steelers played quite of bit of their modified 4-3 in this game with Steve McLendon out, which basically means a classic nickel look with Troy Polamalu coming up to linebacker depth. On this occasion, Arian Foster found a cutback lane in that front around a penetrating defensive end, but the big back slipped out of his grip and picked up 11 yards, nearly all of which came after the contact.

Timmons showed much better on this early second quarter carry by Foster, stopping him after a short gain on second and 10. He was able to quickly sort through the trash and climb up to the running back, stopping his forward momentum as the cornerback came in from the side to assist on the takedown. 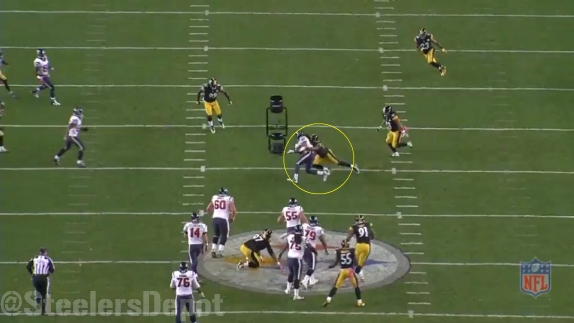 On the Texans’ next drive, the Steelers showed six at the line, but dropped three into coverage. Ryan Fitzpatrick dropped back to pass on second and 11, with the quarterback looking shallow to his third receiver. Timmons found him quickly and brought him down after a five-yard gain. The Texans gained five yards on third down, but were able to convert on fourth and one.

As previously mentioned, Timmons finally notched his first sack of the year against the Texans, blitzing off the right edge against the right tackle. The linebacker rushed upfield in a hurry, in the process chasing the right tackle back and forcing him to overcommit outside. That allowed Timmons to stop short and dash inside, giving chase to the quarterback until he was on the ground. 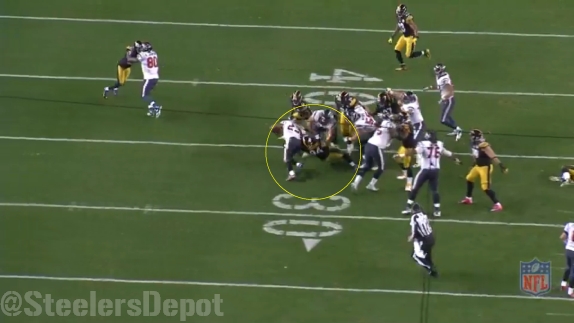 The veteran made a fantastic individual play after in the second half on the Texans’ opening drive. After gaining nine yards on first down, the defense stopped them on the ground on second and one, and then on third and one, as seen above in the screen cap.

With a three tight end look to combat, the entire eight-man line kicked down laterally, with the left guard coming up to pick up Timmons. He fought through the block, however, angling inside, and managed to essentially drag Foster down by a shoulder pad.