James Harrison played his second game back with the Pittsburgh Steelers on Sunday against the Jacksonville Jaguars, logging about a third of the team’s defensive snaps in a rotation with linebacker Arthur Moats.

A week ago, it became obvious at times that the 36-year old had been practicing football-like activities for less than a week, particularly later in the game, when fatigue began to show during his 29 snaps.

He did seem in better physical shape in his second game, which shouldn’t be surprising. He seemed to have improved in particular on his pass rush, showing more bend and giving offensive linemen a harder time.

Still, it’s a bit peculiar that he has yet to record a tackle in the run game in his 50 snaps of playing time. For a period of years, he was the best 3-4 outside linebacker in the league against the run. He was still a quality player against the run last year.

Speaking of the pass rush, however, that knee bend was on display on Jason Worilds’ sack midway through the first quarter. Harrison beat the left tackle around the edge, helping to flush Blake Bortles to his right, where Worilds and others were waiting. 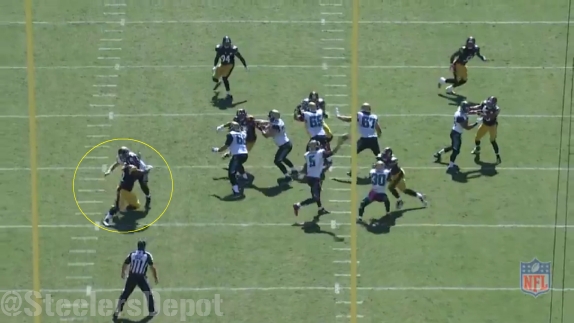 Although he didn’t get to the quarterback on this play midway through the second quarter, Harrison once again showed nice bend on his pass rush.

He was able to get by the left tackle again despite the fact that he was able five yards away by the time the ball was out of his hands. The fact that he is showing he can still win around the edge is a positive sign.

Early in the third quarter, the Jaguars ran an opposite field run with the offensive line blocking left and the running back cutting right. With the left side of the defensive line washed out of the play, the cutback lane was able. Harrison tried to reach him from the back side, but he was held by the left tackle, and the officials missed it.

After Ben Roethlisberger lost a fumble on a strip sack deep in Jaguars territory, the defense stepped up and got in the end zone themselves. But that was second down. On first down, Harrison dropped back into coverage and read the screen pass to Robinson, beating the blocker to drop him for a two-yard loss.

Harrison did finally get to touch Bortles last in the second half when he leapt over the cut block from the fullback. Though Bortles got off the throw for a short gain, it’s another positive sign forward that the pass rush should come with time.