For Pittsburgh Steelers safety Troy Polamalu, last week’s game against the Jacksonville Jaguars was a bit of a getting back to normal game. Of course, Polamalu’s normal isn’t the same normal as other players at his position. 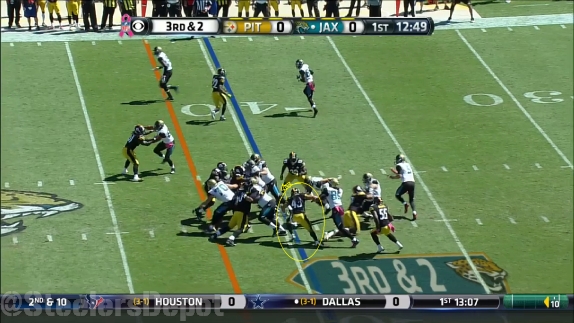 And sometimes it means taking advantage of tight ends in run blocking. Tight end Nic Jacobs took such a passive approach on this early short-yardage carry that it almost seems as though he thought the play would be a pass.

As it was, he nearly allowed Polamalu to make the tackle short of the first down on third and two, as the safety was able to easily enough push off and cut inside the line to grab the running back’s legs.

Three plays later, the Jaguars faced yet another third down with two yards to go. Blake Bortles fumbled the snap, but he was able to pick it up and beat linebacker Sean Spence to the outside. Polamalu cleared a long distance in a short time to make the tackle on the quarterback before he could pick up the first down, even if they converted on fourth down.

To begin the Jaguars’ second drive, the Steelers opened in their nickel defense with Brice McCain in the slot across from Allen Hurns. Polamalu was shadowing the receiver 10 yards off the line of scrimmage.

Off the snap, the nickel back blitzed, while Polamalu picked up Hurns down the field and followed him across the middle. He was able to get on the receiver as the ball was coming in and prevent him from completing the catch.

The fourth quarter saw a couple of those Troy being Troy plays against the run that continues to make him one of the better safeties in the league. On first and 10, lined five yards off the ball in the slot, Polamalu quickly diagnosed the run and dashed in to cut the running back down after just a two-yard gain.

On the Jaguars’ next drive, he basically slid underneath the fullback’s block to get at the trailing running back, bringing him down for a loss of one on the play. Bortles was pressured into an incompletion on third down, forcing the Jaguars to punt, and the offense bled out the last four minutes of the game for the victory.