The Pittsburgh Steelers coped without Ramon Foster in the lineup for two weeks, during which the offensive line received mixed results from backup Cody Wallace, whose natural position is center, starting at left guard.

But Foster was back again this past Sunday against the Jacksonville Jaguars, whose worst blemish was being flagged for a false start for his first penalty of the season.

In all, he turned in a solid, though not great, performance in his first game back. And hopefully the offensive line can now start to build some cohesion.

Though not a particularly significant play in the course of events of the game, this late first quarter carry from Le’Veon Bell sees Foster doing what he does best, which is controlling and sticking to a defensive tackle.

At the snap, Foster got to the outside shoulder of Roy Miller and walled him off, turning him perpendicular to the line of scrimmage. It wasn’t until Bell already hit the hole and met head on with a defender that Miller worked further upfield to get off the block. 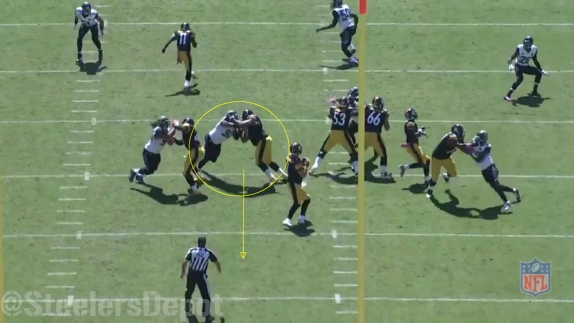 On the first play of the Steelers’ next drive, it was Miller again, this time on the pass rush. The defensive tackle got some push to Foster’s outside, but the big guard used his size and leverage to walk Miller down the pocket in a straight line free of the quarterback.

Foster played a key role on the Steelers’ longest run of the day, and one of the longest plays overall in the game. Coming two plays after the previous, the run was centered around a fold block by center Maurkice Pouncey, who worked around right guard to pick off the linebacker as the right guard down blocked inside.

But it was Foster’s combination block inside, first on the defensive tackle and then on a linebacker, that helped open up the second level for a big gain that went 29 yards.

That drive ended in a field goal after Ben Roethlisberger took a sack on third and goal, but that sack came primarily because the quarterback wasn’t going to throw the ball away unless it was going to land in the hands of a receiver in the end zone.

The difference between a sack and an incompletion for practical purposes is negligible in that situation. But Foster did a very good job of controlling Miller on this play and giving his quarterback an opportunity to leave the pocket.

Foster did give up one quarterback hurry, which game midway through the second quarter on a rush right up the middle. He was actually pushed back into Roethlisberger, who fell to the ground, but not before he’d already completed a 27-yard pass to his tight end.