Pittsburgh Steelers second-year running back Le’Veon Bell already has more than half of the total yards that he gained in his rookie season in just the first five games of the year.

He added another 118 yards last week against the Jacksonville Jaguars to his season total for his fifth-straight 100-yard game to start the season, pounding out 82 yards on the ground on 15 carries and adding another 36 yards through the air.

It’s this dual threat in both the running and passing game that has made him one of the most dangerous players in the NFL, as he currently ranks second in the league behind only DeMarco Murray in total offensive yards amongst skill position players.

His growth in his second season hasn’t simply come in the form of sharpening his skill set, however—his patience as a running already drives defensive coordinators mad—it’s also his slighter build and improved speed and explosiveness that have allowed Bell to take his game to the next level in year two.

Those skills come in handy when the blocking breaks down, which has allowed him to turn many losses this season into gains. After a pull block late in the first quarter around left end took too long to develop, he was forced to make a quick cut and turn upfield, running through a defender for an extra yard.

That’s not to say his blockers haven’t given him a lot of help this year in comparison to his rookie season. It was primarily his blockers that helped spring him for 29 yards at the end of the first quarter. Still, he got a chance to show off his speed and explosiveness on this play, proving there’s just as much finesse as there is power in his game.

Late in the first half, on second and eight in the red zone, Bell turned a check down pass into a nine-yard gain after making the safety miss near the line of scrimmage. The Steelers scored the only offensive touchdown of the game a couple plays later. 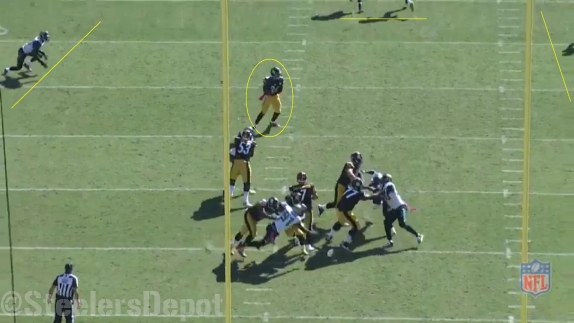 It worked so well the Steelers decided to go back to Bell on third and nine in the fourth quarter. They used the other four targets to run deep and spread out the coverage before dunking it in short to Bell, who had no defenders in front of him for about eight yards when he caught the ball. He easily won the footrace to the first down, gaining 12 yards.

The first-down play after the above is just a good example of how his patience with the ball in his hands helps lead to maximizing a play. He had to wait for Kelvin Beachum to come across for a fold block around Ramon Foster before he could make his move.

With Foster slipping off his block, he veered into the defender’s direction to force the incoming linebacker to the left, allowing Beachum to pick him up and open a hole to the right for Bell to gain five yards. How many other running backs in this league have the football intelligence to manipulate defenders and dictate his blocks this way?