Despite three weeks back now from a groin injury, veteran wide receiver Lance Moore continues to play behind first-year Justin Brown, who frankly finally had a solid game as a wide receiver against the Jacksonville Jaguars.

Perhaps solid ‘drive’ would be more accurate, since he was only targeted three times in the game, and they all came in the span of a few plays on the same drive. He caught all three passes for 26 yards.

But the number of snaps he’s playing in lieu of the veteran Moore has as much, if not more, to do with his height and blocking as it does anything else.

Brown actually played a season-low 38 snaps for the Pittsburgh Steelers on Sunday, which was just under 55 percent of the team’s total snaps, with nearly half of those snaps coming on running plays. 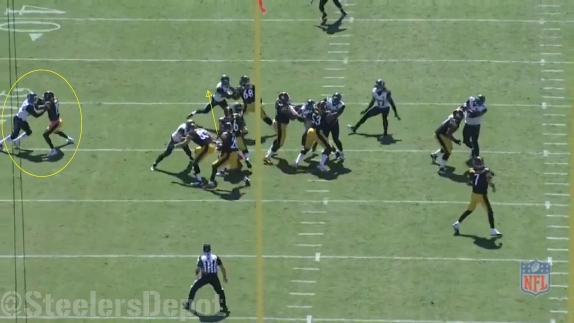 A number of examples would be relevant, but this late first quarter run by Le’Veon Bell would suffice, even if it only gained a modest four yards.

Brown was lined up in the slot, as he most often is. The cornerback was playing just off the lined to his outside shoulder. Off the snap, he got out in front quickly, setting his feet to block down on the defensive back, who could never get into the play.

Of course, not all blocks go according to plan, as this screen pass to Dri Archer midway through the second quarter makes clear.

With Heath Miller off the line outside of the left end and Markus Wheaton set at the line to the tight end’s right on the play side of the formation, Brown lined up all the way on the outside.

Brown raced inside as the snap in an attempt to block down on the cornerback, but he was eluded inside, failing to set his feet and getting too far upfield. The same thing happened to Wheaton, in fact.

As a result, the cornerback was able to get by Brown and nearly tackle Archer in the backfield for a loss. He did manage to escape the first defender, but Archer could only crawl up the right sideline for a one-yard gain thanks to the poor blocking.

If he starts to contribute to the passing game in his manner, however, a couple of slipped blocks on screen passes can be forgiven. Lined up in the slot, Brown eluded a jam off the line before crossing the middle of the field. After not one, but three pump fakes, Ben Roethlisberger finally saw his 6’3” receiver break loose past the far side hash marks for 11 yards, after which he took a big hit from the strong safety.

Roethlisberger went back to Brown on the next play for nine yards, sitting down in a shallow zone from the left outside receiver position. Another six-yard pass from the right slot in a five-wide set moved the Steelers into the red zone. Unfortunately, the drive suffered from premature capitulation when Roethlisberger was sacked and fumbled two plays later.