More game notes from the Pittsburgh Steelers’ thrilling 51-34 victory over the Indianapolis Colts.

– Poor pass protection from LeGarette Blount early in the second half. Fails to stay square to the blitzer, gets turned, and doesn’t hold up well. 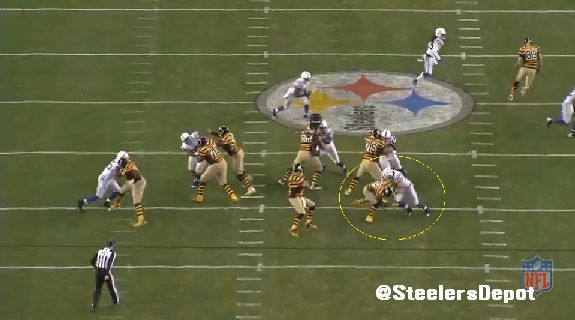 – As shown in the broadcast, the two Colts’ defenders following Markus Wheaton on Heath Miller’s big play. Wide open for 83.

– Martavis Bryant high pointing the football on his second touchdown. At his height with a vertical and arm extension, it’s impossible for the DB to stop him. 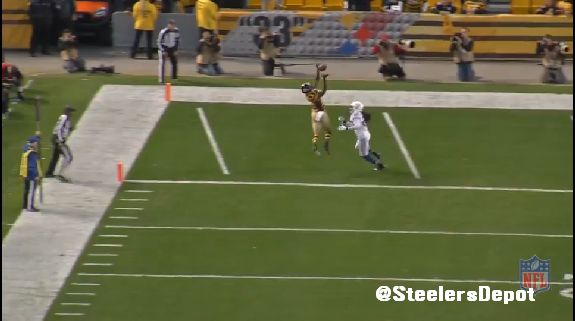 – Don’t care if the running back is by the sideline or not, Cortez Allen can’t go high on the running back. Poor technique. You’re looking for consistency, no matter what the situation. 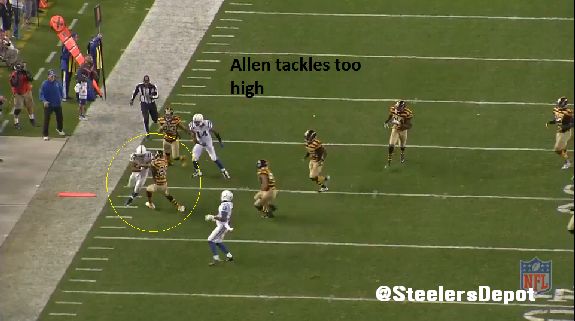 – Like the job by Ryan Shazier to absorb this blow from the back in protection. Takes it on, rips through, and gets to the QB. 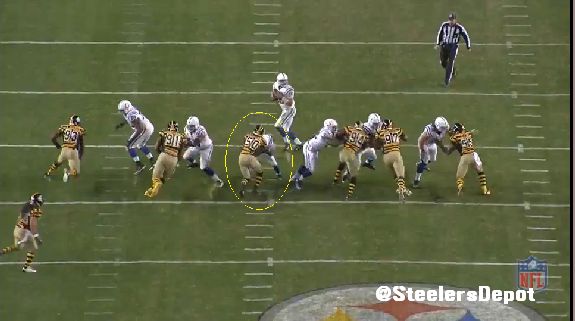 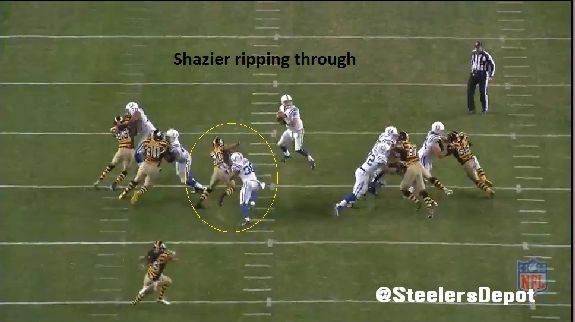 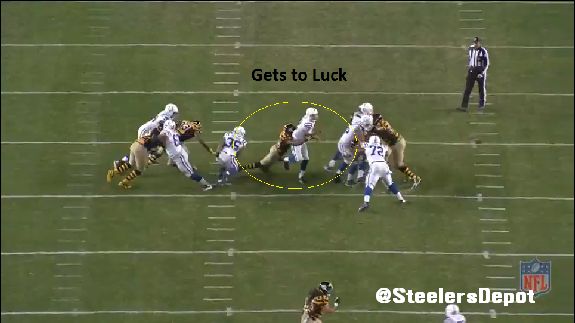 – The benefits of getting pressure on the QB gives a defense. Colts get behind the defense but Andrew Luck doesn’t look that way because of pressure. 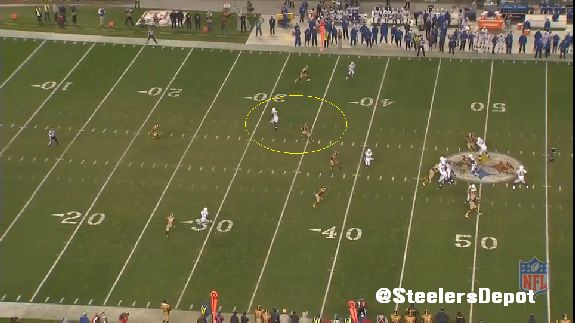 That’s Brice McCain getting burned. Second time Sunday. Just doesn’t get talked about because of the pressure that masks it.

– Le’Veon Bell screws up in pass protection. BoB (back on backer) protection. Doubles the defender versus Mike Adams, leaving the linebacker free. 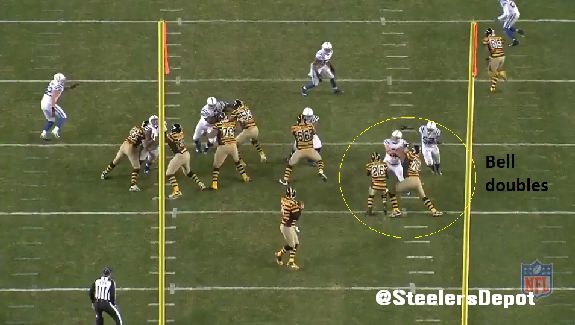 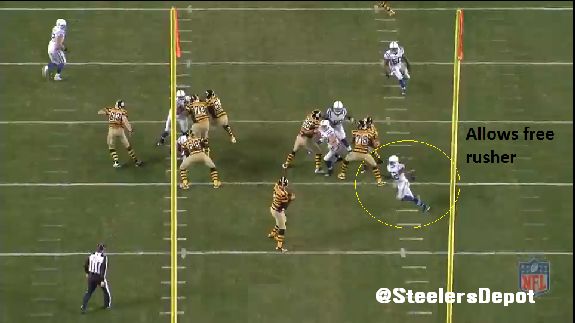 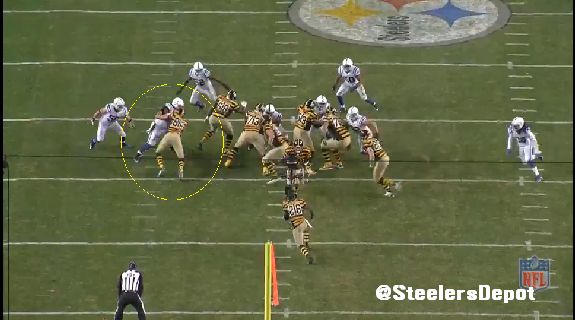 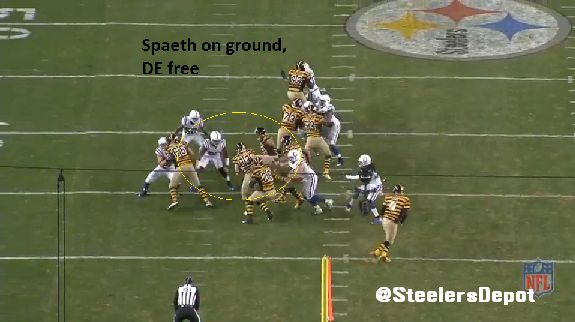 – Mike Adams failing to adhere by his “feet before hands” principles. Causes him to lunge on this run block, fall off, and let the defender win. 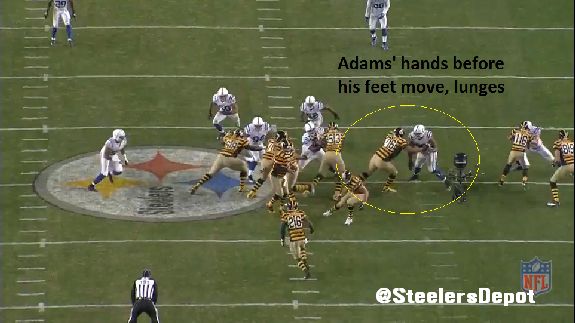 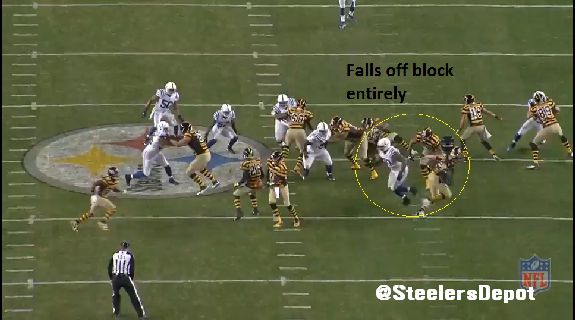 – Another two stack at receiver. A fairly obvious rub on this screen. But not called and the pass is incomplete. 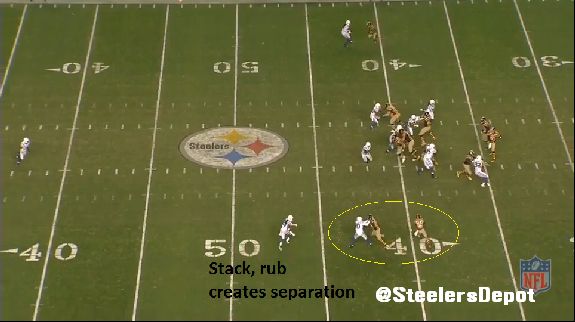 Martavis Bryant quits on his blocking on the play. Although he played with Sammy Watkins, playing with someone like Antonio Brown who can extend the play is an apparent adjustment. 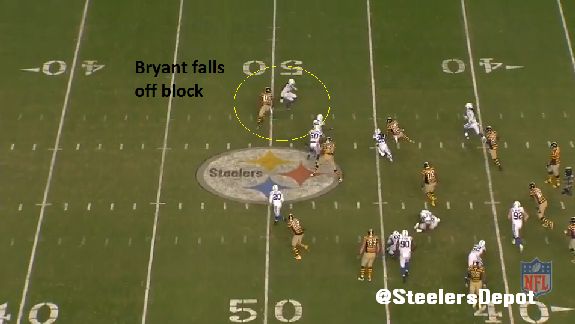 – Adams shouldn’t be letting Corey Redding win inside on this run block. Redding isn’t that far inside that Adams can’t cross his face, especially with David DeCastro getting in the way. Redding winds up making the tackle. 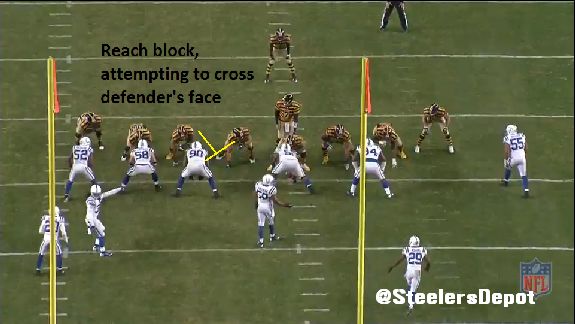 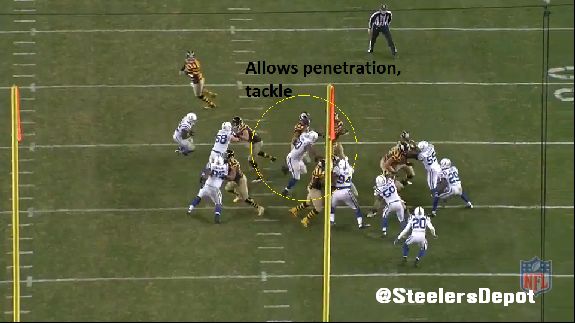 – Heath Miller touchdown. Blount out of the flat is probably the first read but it’s taken away. Ben Roethlisberger looks to his second and finds Miller. Todd Haley has some serious stones to call this one. 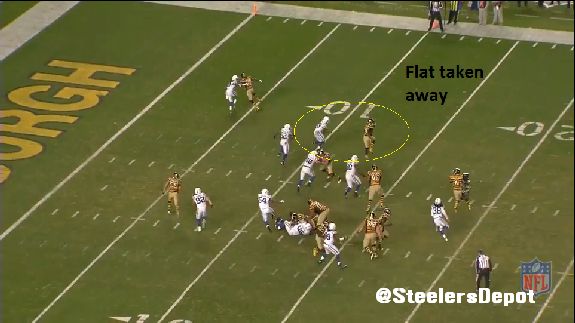 – William Gay showing that quick click and close to jump this route. He’s not a speedster but has very quick feet and change of direction.  Although he doesn’t get the criticism he used to, he’s still the unsung hero of this defense.

– Antown Blake’s INT. Opens his hips and never lets the receiver eat up his cushion. Definitely not trying to give up anything deep the way Cortez Allen did. 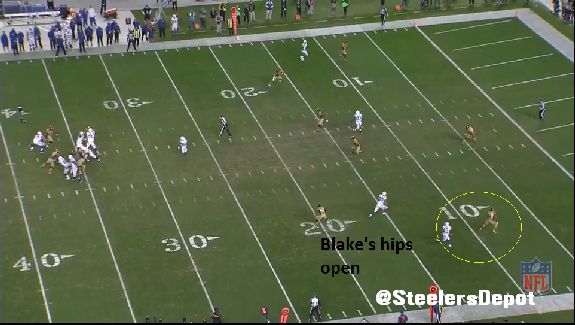 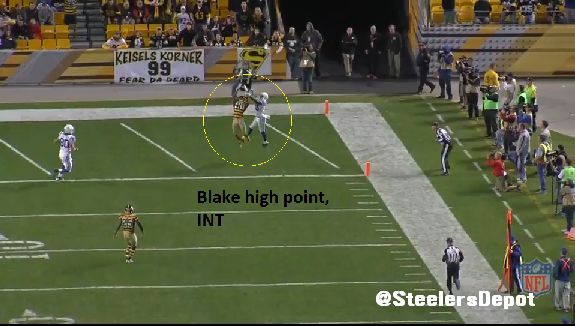 – Mike Tomlin giving the stop sign to Le’Veon Bell to get down and stay in bounds. 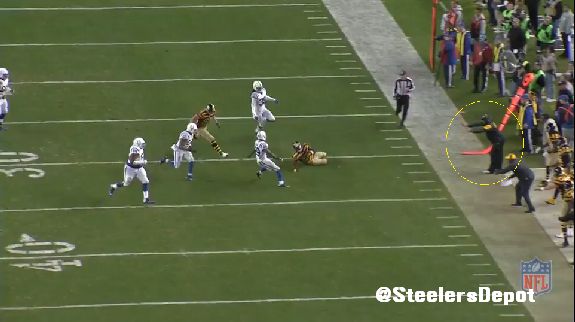 – Some player summaries from the game.

– Ben Roethlisberger was predictably terrific. After the rumblings of him having trouble getting off his first read, he went through his progressions constantly. I think only one of his incompletions, skipping a comeback to Antonio Brown, could be considered a poor throw.

– Heath Miller had one of his better games not only as a receiver but as a blocker.

– David DeCastro had a rocky start and definitely hasn’t been playing to the level he’s capable of. Thought he fell off some blocks he normally won’t and missed a few stunts that he’s normally ultra-reliable at picking up. But he evened out as the game goes on and I expect him to bounce back.

– Ramon Foster needs to keep his feet moving in pass protection. Wasn’t terrible but some instances where they’d go dead.

– Mike Adams surprised everyone, but the team did offer as much help as it could. Two or three tight end sets to force the EMOL to rush through clutter, keeping Heath Miller in to block, having the back chip. But Adams moved well laterally and seemed to think faster – you can see that in his stunt pickup – allowing him to play faster.

Shockingly, I thought his pass blocking was better than his run blocking. Got out of control in the run game and wound up on the ground. A lot of the issues I highlighted above.

– I like the rotation at WR. Maybe no one outside of Antonio Brown is worthy of playing full time snaps. It’s unconventional and less than ideal but they’re probably better off playing 30-35 snaps. Forces players to compete even more and maximizes your talent. Doesn’t put the pressure squarely on one young dude.

– As I mentioned, James Harrison and Jason Worilds are starting to feel it. I think Harrison has a low ceiling and benefited from going against such a tall tackle but the sky is the limit for Worilds. Let’s see how he stacks these performances. The tools are all there.

– Vince Williams does bring a level of tenacity to this defense. Certainly will set the tone for this Sunday’s game against the Baltimore Ravens.

– Mike Mitchell had a below average game. One or two missed tackles and some poor angles. Looking for him to bounce back.

– Similar to the Steelers’ victory over the Carolina Panthers, Dick LeBeau was blitz heavy. Rushed six defenders eight times Sunday. He had only done that 11 times through the first seven weeks. Knew he couldn’t give Andrew Luck a clean pocket or he’d pick the Steelers apart. Wanted to get after him schematically and the defense executed.

Hope to have a short article that breaks down some of those looks in the next day or two.