The Pittsburgh Steelers opened up a new wrinkle on offense against the Tampa Bay Buccaneers—or at least revisited one that we don’t often see—when Ben Roethlisberger utilized the play action frequently in the pass game.

Even more uncommon was a handful of designed rollouts, sometimes paired with play action, both of which the Steelers do less than just about everybody else.

In all, the wrinkles to the passing offense were successful, as Roethlisberger had his best game of the season, completing nearly 75 percent of his passes for over 300 yards and tossing three touchdowns without an interception. 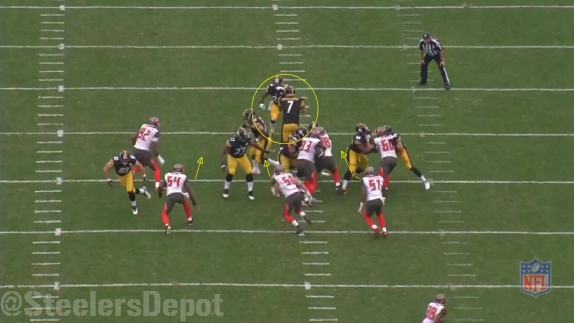 It started early in the game, and this particular play continued a theme throughout the day. This was the package play alluded to throughout the week, which was a run-pass option that would go to Heath Miller if he was uncovered. 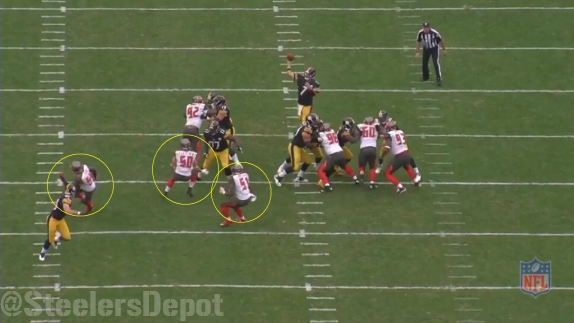 That was clearly the case here as the linebackers bit on the play action. You can see Lavonte David just barely getting turned back upfield in the screen capture above, with the tight end wide open. He unfortunately dropped the pass, but Markus Wheaton moved the chains on third down.

The very next play after the third-down conversion also went to Wheaton, this time on one of the designed rollouts that Roethlisberger, quite frankly, isn’t overly accustomed to running, since the Steelers use it so infrequently. On this occasion, the offensive line down blocked to the left as the quarterback faked a pitch left to the running back before peeling out to the right flat, where he hit Wheaton while on the run, good for a 14-yard gain.

Later in the first quarter, Roethlisberger faked the handoff and rolled left this time as the offensive line down blocked in the opposite direction. Miller peeled out and turned around for the five-yard reception. In case it’s not obvious from these examples above, the luxury of these rollouts is that it helps keep the quarterback from the pressure.

The Steelers opened the second half with play action, launching a deep bomb to Wheaton, even though Roethlisberger overthrew his receiver. 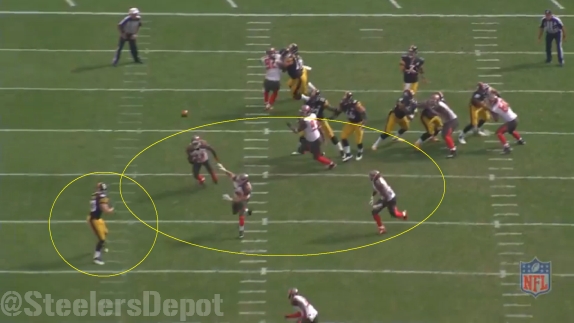 On second down, they went back to the packaged play, and once again the linebackers were drawn up to the line on the play action, leaving Miller with space down the field. This time, he held on for 16 yards.

Roethlisberger found Miller in stride again early in the fourth quarter after faking a handoff on second and 17, with the tight end finding space between the linebackers and gaining 19 yards.

It certainly seemed most of Miller’s career-high 10 receptions benefited from play action against the Buccaneers. It will be interesting to see if the Steelers continue to be proactive with these wrinkles to the passing game as the season goes forward.