There is little question, at least among those who review the Pittsburgh Steelers’ game footage, that nose tackle Steve McLendon has been one of the best players thus far this year for the team on the defensive side of the ball.

He was among the Steelers’ best defenders yet again this past Sunday against the Tampa Bay Buccaneers, though he was unable to generate as much pressure on the quarterback as he did a week ago when he recorded his first sack since 2012. The bulk of his work came in the running game, as the Steelers were more wont to use the nickel this time around.

It started on the first play of the game for the defense when he helped tackle Doug Martin after a two-yard gain when the Buccaneers took over at the nine-yard line thanks to a Ben Roethlisberger strip sack.

On the play, McLendon was able to gain leverage against center Evan Dietrich-Smith, working him back into the pocket and into the running lane. As Martin cut to his left, McLendon worked down the line and was able to join Sean Spence on the tackle. 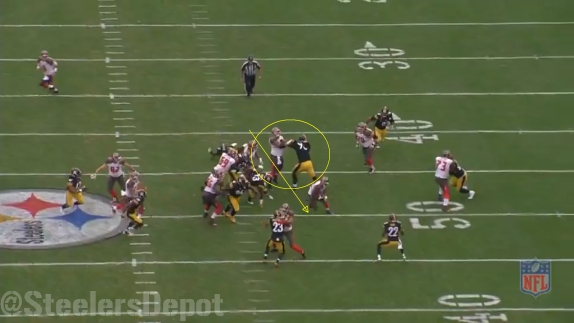 He didn’t win every battle, of course, but this one may have been the most inexplicable, on which the center seemingly rendered McLendon completely immobile on an interior nine-yard run right up the gut.

As evidenced in the screen shot above, Martin was already well past the line of scrimmage and McLendon was still unable to disengage from Dietrich-Smith. There’s an almost comedic effect to it, actually, the way the two stood frozen, although I half suspect that the nose tackle was searching for a holding flag that never came.

I would say that McLendon got back on the winning side again on this late first-half carry from Bobby Rainey that was stopped after a three-yard gain, but the circumstances suggest otherwise, considering it was a second and one play. Even still, he did display the basic mechanics of working down the line and shedding to make the tackle after a short gain, even if it was enough to move the chains.

Late in the third quarter, the Buccaneers were up against another short-yardage situation on second and three, and this time the defense managed to stop them, at least for one down. Included in the heart of those defenders who stopped the play was McLendon, who stalemated the center and then pushed down the line to ensure that the runner was down. 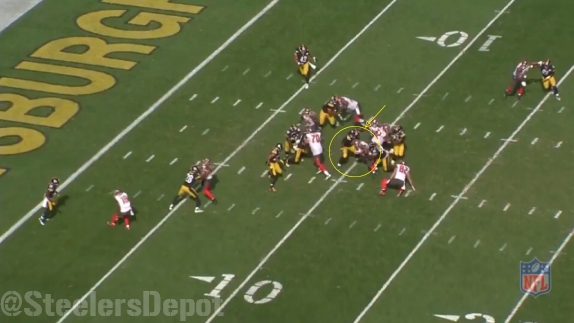 Toward the end of the same drive, the Buccaneers had first and goal, and the Steelers’ defensive line shifted left, with McLendon lined head-up with the right guard. The pair clashed at the snap before the nose tackle got free and chased the runner down for a short gain, along with Arthur Moats, who made the primary tackle.