Pittsburgh Steelers inside linebacker Sean Spence made his first career start on Sunday against the Tampa Bay Buccaneers, filling in for the injured rookie starter Ryan Shazier. But even with Shazier missing the last game, Spence has still only played one more career game, despite being in his third season.

That is, of course, because of a long, two-year rehabilitation process, a story that has already been told ad nauseum. The point is, however, that Spence is still very much feeling out the game from a physical standpoint, regardless of how many mental reps he took over the last two years. His play against the Buccaneers showed some of those ups and downs. 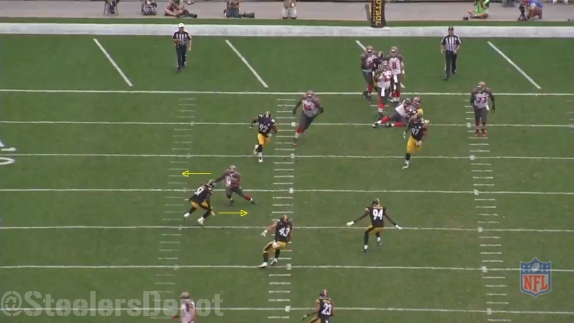 That didn’t slow him down on the first play of the game, however, when he charged through the right guard and pushed his way down the line to make the tackle on running back Doug Martin after a two-yard gain. Spence may be small for his position, and that will handicap him at times, but he does have some power.

The Buccaneers began the second quarter encroaching on Steelers territory. On that first play at the 15:00 mark, Spence came in unblocked, and had an opportunity to bring Martin down at the line of scrimmage, but the big back sidestepped him, showing nice feet and lateral movement to evade the shifty linebacker. It turned a potential loss into nearly a first down.

Late in the first half, the Buccaneers were backed up in their own end following a sack and a pair of delay of game penalties. They played it safe on third and 31 just dumping the ball off to the back, but Spence had the opportunity to keep the play in front of him and hold it to a minimal game. Instead, the back was able to cross him up in the open field and gain an extra 10 yards or so as part of the field position battle.

Off to the second half, the Buccaneers led off with a seven-yard play. On second and three, Martin got the ball on a carry off right end. Lawrence Timmons took on the blocker, freeing up Spence to pursue around the edge. He chose the right gap to hit, on the outside of the tight end, but could only make an arm tackle. Spence grabbed Martin’s leg at the 29, but he landed on the 34.

The drive ended with Tampa Bay getting into the end zone, but not without a bit of controversy. As is clearly visible above, Spence was held by the left tackle on a goal line play from the three that saw Martin sweep left and into the end zone virtually unchallenged.

It seems obvious to me the defense would have been able to put up more of a fight on this play had the rules been adhered to. I understand the impossibility of calling every infraction—though at times it seems they try their best—but every obvious call that clearly directly affects the outcome of the play most certainly should be called. This is one of those instances. Had the penalty been called, this would have made it second and goal from the 13, rather than a touchdown.

That hold, of course, also drew a lot of attention during and after the game, and I’m sure it’s still being talked about. It wasn’t the only time that Spence was held in a manner that directly influenced a big play, however.

It also happened early in the fourth quarter on this end around that went for 19 yards. The center jumped out to the second level, got a hand on the back of Spence’s jersey by the neck, and dragged him to the ground. The wide receiver then proceeded to run up the now obviously vacant sideline.

Late in the game, Spence was in primary coverage on the tight end on second and 23. There was no zone to pass him off to, so the tight end got behind him and planted in front of the safety for a 21-yard gain.

Toward the end of that drive, the Buccaneers tried out a trick play with Rainey throwing the ball. It didn’t work out so well after Spence rushed his throw with pressure up the middle.

In the end, he finished his first career start with three solo tackles to go along with a couple of warts here and there. There is obvious room for improvement in his game, which should not be surprising. But let’s just take one last moment to reflect on the fact that we’re finally talking about Sean Spence the football player and breaking down his game film.