The Pittsburgh Steelers were not getting what they paid for from right tackle Marcus Gilbert through the first two games of the season after signing him to a new long-term deal late in the offseason, tying him down on the line for years to come.

His early struggles belied a steady progression throughout the spring and summer that extended into the preseason, during which the new deal was struck. It seemed that he was prone to resorting to old habits when caught off-guard, which helped lead him to giving up four sacks in those two games.

He has been somewhat of a different player, however, since then, settling down on the right side and beginning to come into his own as a viable long-term option at right tackle. The Tampa Bay Buccaneers game was the next step on that road.

New offensive coordinator Mike Munchak has, by all reports, been able to get the most out of his pupils, who routinely say that he tells them he won’t put them in a position to fail. Despite that, he still likes to get them on the move, even those for whom it is not a strong suit.

That’s what he had Gilbert doing midway through the first quarter on first and goal. The Steelers ran Dri Archer on an end around to the right side with Gilbert out in front. He was able to get a good piece of linebacker Lavonte David, but David was eventually able to get ahead of the block and just barely tripped up Archer as he ran by. 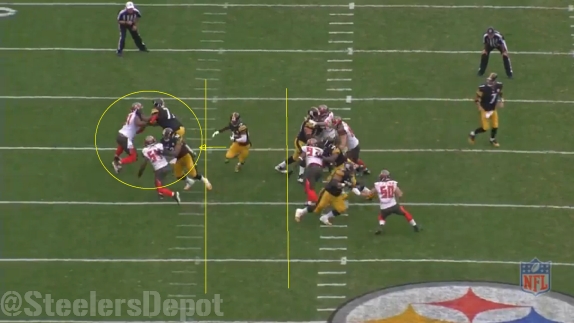 On the Steelers’ next possession, he helped open up a big hole for Le’Veon Bell on a run off right guard for 16 yards. He stepped up and attacked Da’Quan Bowers, jarring him backward, and then proceeded to drive him back, as seen above.

A few plays later on the same drive, Gilbert had to hold up across from William Gholston in pass protection with Ben Roethlisberger holding on to the ball before finding Antonio Brown open down the field for 27 yards.

The Steelers bluffed max protect with wing protectors in the backfield before both the tight end and running back bailed, leaving Gilbert on an island, anchoring just in time to get the pass off.

Gholston didn’t get anywhere near that close on the next snap, which was first and goal. The end rushed wide and Gilbert mirrored, absorbing the bull rush and using leverage to stop his forward momentum, giving Roethlisberger time to find his receiver underneath for five yards.

The Steelers were backed up deep in their own territory to begin their next possession, but quality blocking from all parties involved created a nice hole for LeGarrette Blount on first down. Gilbert chipped down on Gholston before veering off to pick up linebacker Dane Fletcher, who he turned aside and tied up until the running back was clear.