You may recall that veteran Pittsburgh Steelers inside linebacker Lawrence Timmons got this season off to a slow start, missing somewhere around double-digit tackles between the first two games alone.

Timmons, of course, has not been immune to slow starts in his career, but it’s more difficult in some years than others for the rest of the defense to weather the storm until he finds himself.

He fortunately seems to have come into his own, however, over the last two games, as he once again was among the team’s best defenders Sunday against the Tampa Bay Buccaneers., showing well in all aspects of the game.

Timmons is, of course, adjusting to his new role as the buck linebacker this year, meaning that he is being asked to take on more blockers. It’s not as though he doesn’t have the size and strength to do it, of course, as seen above. The team just wanted to take advantage of his quickness while shielding him from playing without thinking before.

On this example, the left guard stepped out to the second level to block Timmons, but the linebacker was able to cross his face and push off the guard’s outside shoulder to get by, filling the hole to make the tackle after a short gain on first and 10.

This is an interesting play, however, because it shows Timmons’ frustration when he knew he made a mistake, even if the consequences were negligible. The scenario here was second and 25, and Timmons was eying the back to protect against a screen before bailing and dropping in coverage.

He bailed too soon and Doug Martin got the ball after he turned around, forcing Timmons to chase him down after nine yards. He held his head and then pounded his fist into the grass after making the tackle in recognition of his premature drop, even though it only set up a third and 16.

Late in the second quarter, the Buccaneers got themselves in an impossible jam yet again, this time facing a second and 30 from their own 12. The draw didn’t work out as planned, as Brett Keisel quickly got penetration and contacted the back behind the line of scrimmage. Timmons quickly came crashing in for an assist. 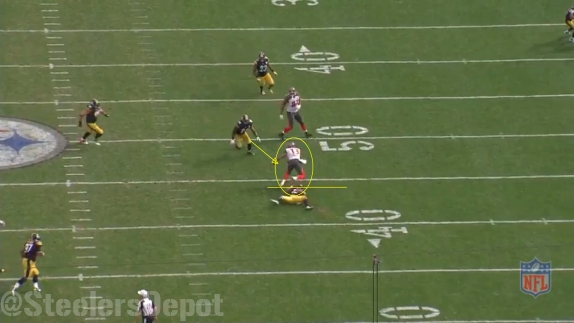 He showed impressive closing speed midway through the third quarter on a short pass to Mike Evans. With Troy Polamalu reacting quickly and getting him by the legs, Timmons still had about four yards to close by the time the receiver got out of Polamalu’s grasp, but his burst prevented any yards after contact.

Timmons displayed a sense of urgency in both diagnosing to and reacting to plays throughout the afternoon and was generally around the ball after any given snap, closing in on ball carriers and making several stops in the running game. 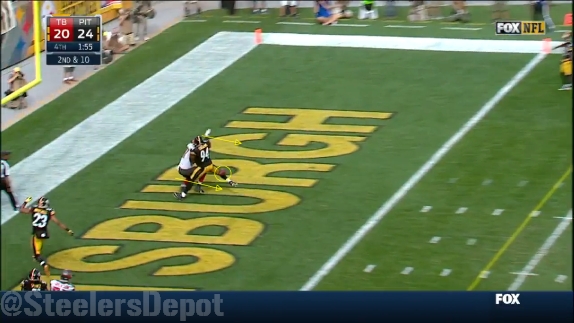 His work in coverage as well is not to be ignored, however, as on this goal-to-go play late in the game, in which he failed to play the ball, but played the man well against the Bucs’ rookie tight end. Timmons understood that he could stand his ground with the receiver trying to come back to the ball, and thus could not be faulted for the contact initiated by the offensive player.