Outside linebacker James Harrison played his first game for the Pittsburgh Steelers this past Sunday for the first time since December of 2012, after which the veteran was released as a result of his refusing to take a pay cut.

He spent the 2013 with the division rival Cincinnati Bengals, playing out of position in a rotation in their 4-3 defense. Despite that, he showed that he could still hold up against the run.

The Steelers put themselves in a vulnerable position when they chose to carry only three true outside linebackers on the roster this year. When Jarvis Jones suffered a wrist injury and required surgery, assuring that he would miss eight games at a minimum, they had to find depth, and they did so with the re-signing of the recently retired Harrison.

I must admit that it was gratifying on a personal level to see Harrison back on the field with the Steelers, even though I was surprised to see him log nearly 30 snaps a week after sitting on the couch watching football. And overall, he turned in a representative performance, even if it was sporadically obvious that he’s not yet in football shape and is relearning the defense.

Harrison played his first defensive snap of the season on the Buccaneers’ seventh play of the game, on their first third down. It was third and seven with the ball on Pittsburgh’s 32-yard line when the 36-year-old came on as an inside rusher. In reality, however, he was stalemated by the center, with Cameron Heyward providing the pressure that forced an incomplete pass.

After a couple drives, Harrison and Arthur Moats began loosely alternating series. Harrison was out with the defense on the Buccaneers’ third drive. On first down, it was once again Heyward blowing up the play, beating the reaching center for a tackle for loss. Harrison was pushed wide by the tight end, but he did break away to mop up in the end and ensure the runner was down. 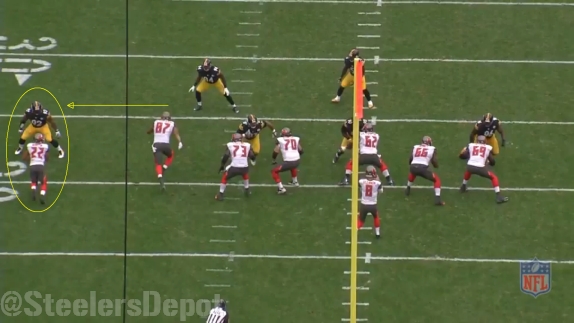 On second down, the back motioned out of the backfield and into the slot on Harrison’s side. The linebacker followed, covering him on the play, as seen in the screen shot. As a matter of fact, Harrison dropped into coverage on about a quarter of his snaps in the game. Clearly, Dick LeBeau has no qualms about giving his old linebacker the full package. Fortunately, however, he was never targeted in coverage. 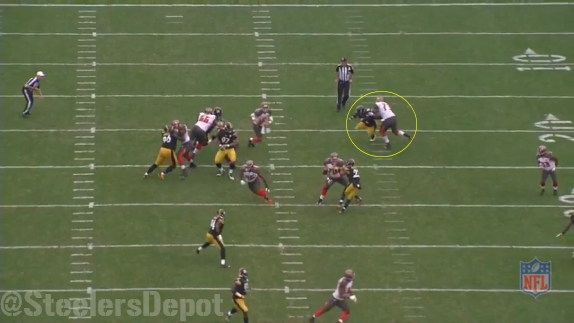 On what was perhaps his highlight of the day, Harrison was able to get decent enough bend on a pass rush late in the second half that forced left tackle Anthony Collins to grab hold of the edge rusher and drag him down, drawing a holding flag. Most of his other pass rushes were less than successful as he showed fatigue late in the game, when most of his rushes came.

That drive continued on this play, on a draw to Bobby Rainey that clearly did not work. Harrison played pass and thus rushed wide, but he was able to come back to the play and was actually the one to grab hold of the back’s legs and twist him down, even with two other defenders already engaged. Still, he was not credited with any tackles in the game.

It’s worth pointing out that, as seen above, Harrison did play on both sides of the defense. On third and 31, the next play, he rushed from the left side, charging inside at the right guard and getting some push. He got a hand up into the quarterback’s passing lane as well, though the pass was still completed.

He did have this one blunder early in the fourth quarter, however, as he failed to stay home when the Buccaneers ran an end around to his side, which went for 19 yards  and got Tampa Bay out of the shadow of their own goal line. Not only was he slow to diagnose the play, he was also slow to react, though in truth, he has been victimized on gadget plays in the past.