The Pittsburgh Steelers received solid work out of reserve lineman Cody Wallace last season when he had to finish up the final quarter of 2013 as the starting center. He had a particularly positive final two games, which helped net him a new three-year contract.

Now the primary reserve lineman for all three interior positions, Wallace has started at left guard for the past two games with Ramon Foster sitting out.

While he did some good things against the Tampa Bay Buccaneers, particularly in the running game, at other times it seems obvious that his natural position is at center.

He was beaten for an early sack on the second play of the game, losing cleanly and immediately to defensive tackle Gerald McCoy. While he may be one of the best defensive players in the league, Wallace made this one look too easy. McCoy victimized him with a sharp swat with his left arm, getting the guard to stumble forward.  It was a straight line to the quarterback after that. 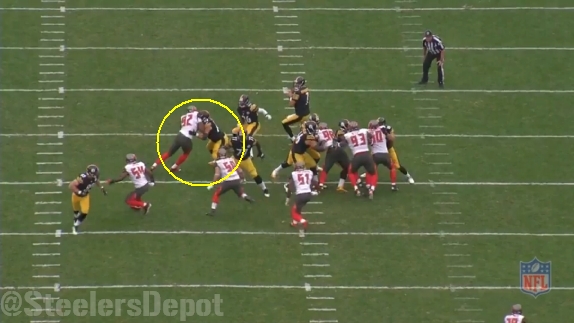 As mentioned, however, Wallace did have his moments, as on this pull block in pass protection, picking up the left defensive end and giving Ben Roethlisberger a clean pocket to hit a wide open Heath Miller, though the tight end dropped the ball.

But again, he was beaten cleanly on the very next play in pass protection by Clinton McDonald up the middle. The Buccaneers showed a wide front with the defensive tackles lined up as three-techs on the outside shoulders of the guards. Wallace was caught setting to the left, allowing McDonald to penetrate inside. Roethlisberger got walloped as a result, but not before completing a key third-down pass down the field to Markus Wheaton. 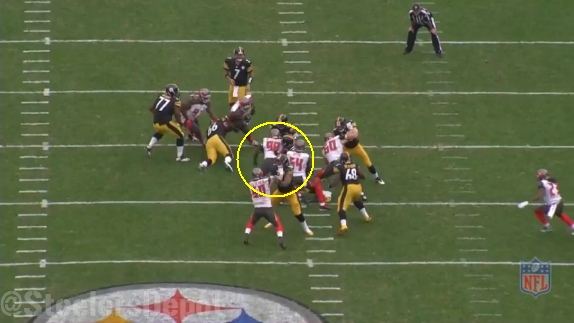 McDonald got the better of the reserve guard again on the first play of the Steelers’ next drive, this time on a running play. He and Maurkice Pouncey started on a double team before the center advanced to the second level.

But Wallace wasn’t able to hold the defensive tackle on his own, allowing Le’Veon Bell to be tackled for no gain. To be fair, however, he came back on the next play to throw a block downfield that helped open up a 16-yard gain.

Wallace and Pouncey completely neutralized McDonald a few plays later on another long run from Bell up the middle. Pouncey looked to advance to the second level when Lavonte David tried to cut inside the left guard, but Wallace adjusted and the two linemen were able to block both defenders together.

The game more or less followed a similar trajectory as suggested by the plays examined above. In all, it was a decent performance for Wallace knowing that he is a reserve lineman playing outside of his natural position. His aggressive demeanor is always welcome on the field, but ultimately, the offense should benefit with Foster back this Sunday.