Through the early stage of the season, the Pittsburgh Steelers found themselves suffering greatly due to the subpar performance of their veteran inside linebacker, Lawrence Timmons.

Since his shaky start in the first two games, however, he has consistently been one of the best players on this defensive unit, particularly in the running game.

Quite frankly, without his solid play up the middle right now, this defense might be completely lost as they battle injuries, new pieces learning the system, and just subpar play. The Steelers may be without as many as five defensive starters from the season opener when they play Monday night, which means the veteran Timmons will be as crucial as ever if the Steelers wish to find success at home.

Timmons was all over the running game against the Cleveland Browns, leading the team with 10 tackles, including five solo, the example above among them. It came on the first play of Cleveland’s second drive.

With the Browns’ line sweeping right and Cameron Heyward getting cut down by the left tackle, running back Ben Tate cut to the left to fill the wide open hole around the defensive right side. The fullback, however, couldn’t get to Timmons in time (and actually ended up blocking his own guy), resulting in the buck backer making the tackle behind the line of scrimmage. 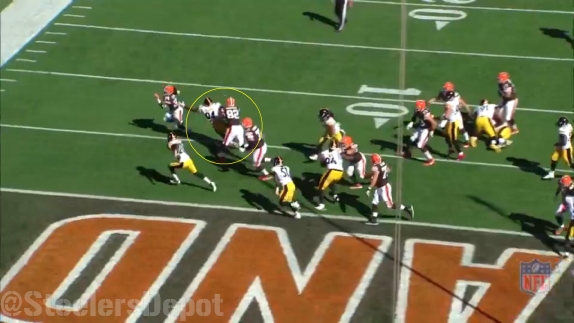 One of the few plays in the running game that he was unable to make was one that he could do little about. It came on Isaiah Crowell’s five-yard touchdown run. He was first slowed in his pursuit to the right sideline by a lineman, but then the Browns’ third tight end grabbed a hold of him—much as Sean Spence was held a couple weeks ago—with no call, resulting in the score.

Timmons came right back, however, meeting Tate in the hole on the Browns’ next offensive play. The back had two option as to which hole he wanted to hit. Timmons just so happened to choose the right one to pursue, and he met the back and brought him down after a short gain.

Later in the third quarter, Timmons and Tate reunited once again with the back emerging from a hole, but this encounter wasn’t so friendly. The linebacker got by the center’s second-level block, got around the corner, and met Tate head on, popping him and sending him sprawling sideways after a short gain.

Needless to say, the Steelers need Timmons to continue to play at this level in order to keep the defense afloat. In fact, they need even more from him. If you look at his stat sheet, everything is blank except for the tackles. While he’s stopped missing tackles, he hasn’t generated any pressure on the quarterback, nor even deflected a pass, let alone forced a fumble. He may be their tackling machine, but he may need to become the playmaker as well.