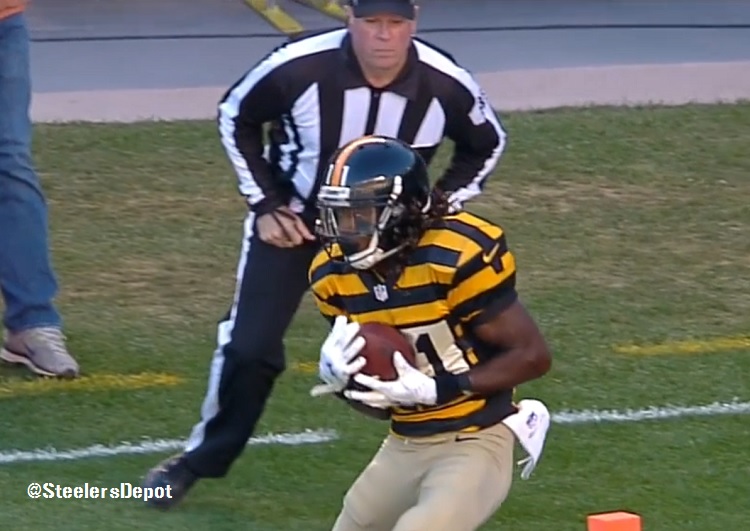 Pittsburgh Steelers second-year wide receiver Markus Wheaton has had a tough go of it so far this season, but in the win Sunday over the Indianapolis Colts he showed signs that he might be back on the same page again with quarterback Ben Roethlisberger.

After only catching five of 16 passes thrown his way for 50 yards in the previous three games, Wheaton, who was drafted in the third-round of the 2013 NFL Draft out of Oregon State, caught all five passes thrown his direction Sunday for 56 yards. Oh yeah, he also scored his first career touchdown on the game’s opening drive.

After Sunday’s win, Wheaton talked about his bounce-back performance.

“I made mistakes, went back to practice and fixed it,” Wheaton said, according to Ray Fittipaldo of the Pittsburgh Post-Gazette. “Hopefully that shows up in the next week. This week it did. I put in a lot of work with Ben, as did the rest of the Steelers, and it showed up.”

Over the course of the last two games, Wheaton has seen his playing time decrease dramatically. After averaging nearly 62 snaps of playing time in the Steelers first six games, the young wide receiver has averaged just 32.5 in the last two contests.

Some of Wheaton’s snaps are now going to rookie wide receiver Martavis Bryant now that he’s been active the last two games and that figures to continue moving forward into the second half of the season. In addition, we can probably count on veteran wide receiver Lance Moore playing roughly 20 snaps a game on offense as well.

As you can see, Wheaton would be wise to take advantage of the snaps that he is given moving forward. Judging by what we observed Sunday, he’s doing just that and we can only hope that it continues.