Sack breakdown of the relatively low two allowed by the Pittsburgh Steelers against the Cleveland Browns in Week Six.

Two receivers to the bottom of the screen. Lance Moore looks to block and Markus Wheaton jogs off the line, intentionally trying to sell run.

The only receiver running a route is Antonio Brown, a post corner. 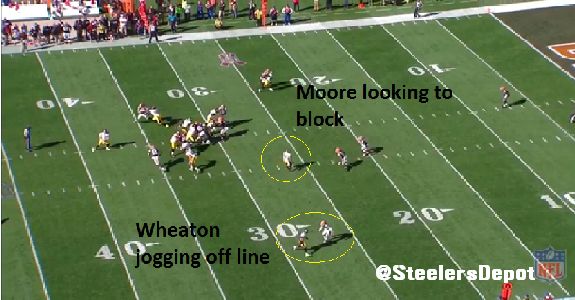 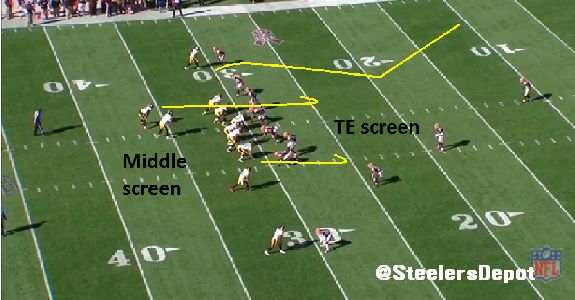 On the line from the end zone view, ideally, Heath Miller will punch the defensive end – outside linebacker playing with his hand in the ground Barkevious Mingo (#51) to be picked up by right tackle Marcus Gilbert.

But with #58 Christian Kirksey blitzing, Gilbert has to pick him up instead. Work inside out. As Miller lets Mingo go to show Big Ben his numbers on his route, there’s no one to snag the defender. He rushes in free. 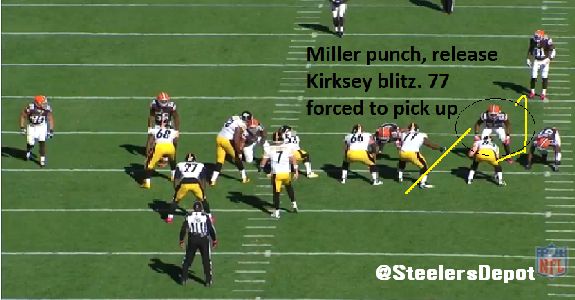 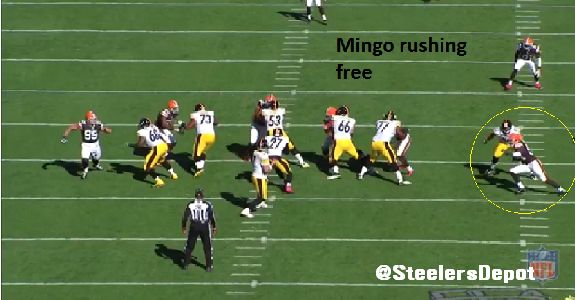 Ben is immediately forced to climb the pocket. Defensive tackle John Hughes spins off David DeCastro and drops #7. Roethlisberger did look at Miller at the last moment but decided against the risk and ate the ball.

We’ve focused on the line so much but I won’t place the blame here. I don’t get on coaches very often but I’m not a fan of the playcall.

While it does have the option to throw to the back, the TE middle screen hasn’t been effective in recent weeks. This similar playcall was used last week against the Jacksonville Jaguars. Same down and distance, 1st and 10. It too resulted in a sack.

The other issue is the use of the playfake. On an already slow-developing play, a screen, I don’t see he point in using more clock to execute the fake draw. It eats up lose to another second from snap to the time Roethlisberger can stick his eyes downfield and reading what is available. Maybe he can avoid the rush.

Maybe he could’ve seen a wide open Antonio Brown. Although I don’t know what the read could be, Brown shakes Joe Haden and is open once he stems to the corner. Check out the separation from two different angles, aerial and end zone. 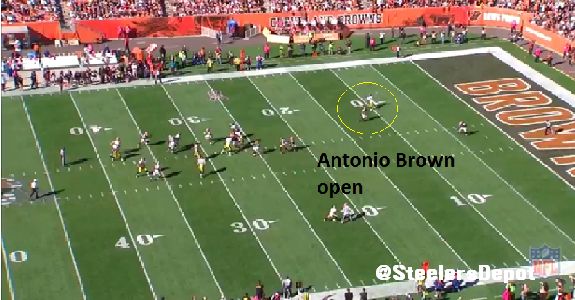 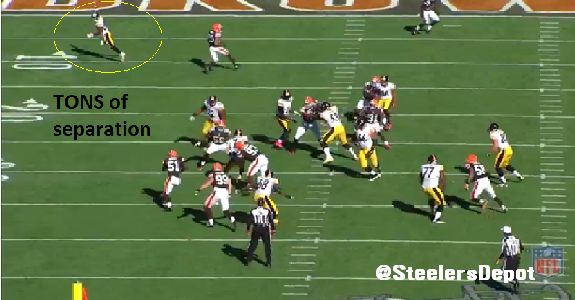 If Ben isn’t pressured and he spots Brown, it’s got a great chance for six points.

Just like Todd Haley with the fake bubble screen, he gets a little overzealous with this playcall. Something he should file away for a few weeks, just as he did last year.

Our focus along the offensive line lies with DeCastro and Gilbert. DeCastro falls to one knee after getting punched by Desmond Bryant, who rips past up the guard. 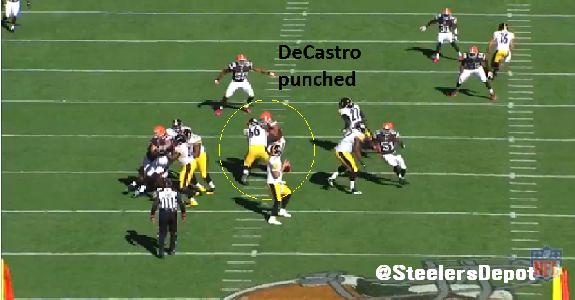 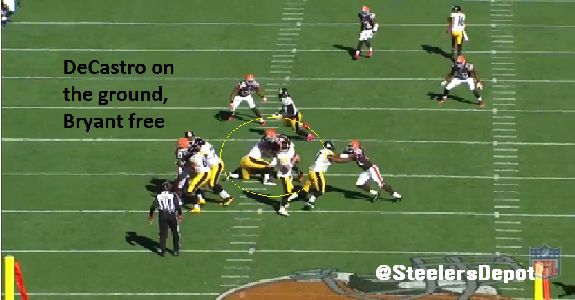 Marcus Gilbert is fends off a spin move from Mingo but gives up a little too much ground against him on the bull rush. Lineman will naturally be pushed back on a bull but it’s a little too much for my liking against a svelte, weaker linebacker. 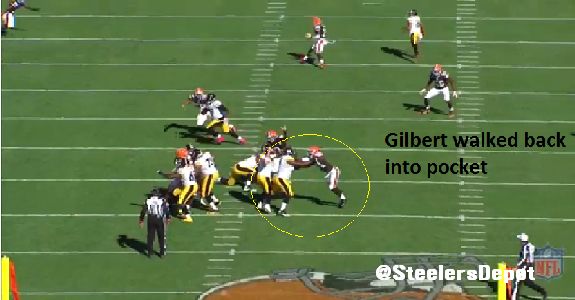 It causes the pocket to collapse. Ben attempts to climb and step over Marcus Gilbert’s foot – remember when I pointed out him doing that early in the season? – but gets bumped into and begins to fall. Bryant is free up the middle and finishes him off.

It’s too bad because safety Donte Whitner is playing flat-footed and is still in his pedal. On a nine route down the seams, Lance Moore jets past and will be open in the end zone. Roethlisberger is about to pull the trigger for Moore when the pocket collapses. He climbs and attempts to reset but is unable to. 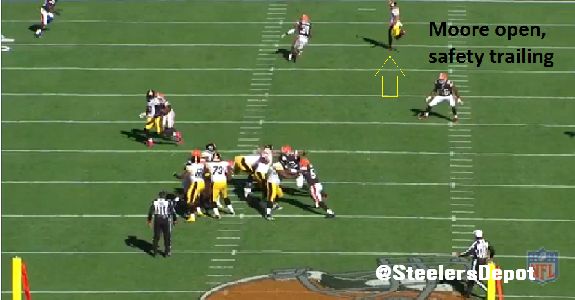 It’s another instance of the Steelers having a great shot for six points, making it a 21-10 game. Instead, it’s back-to-back sacks a 3rd and 17, and a punt.

Blame: Half on DeCastro, half on Gilbert.