The Pittsburgh Steelers’ defense was arguably its most aggressive last week against the Indianapolis Colts. Defensively, Dick LeBeau got back to some core blitz concepts to create chaos along the Colts’ offensive line. We’ll look at some of those specific examples.

Statistically, the numbers show LeBeau being as aggressive as he’s been all year. The Steelers sent six rushers eight times against the Colts. Coming into the year, they had only done that 11 times.

The Steelers blitzed on 41.4% of passes Sunday. Coming into the year, they blitzed just 24.5% of the time. Don’t think those blitzes came late in the game either. The Steelers became passive in the fourth quarter in an effort to avoid giving up big plays. Blitzed just twice on 12 throws in the 4th quarter.

Statistically, the Steelers sent pressure but schematically, how did it work? Six examples below.

On the snap, Lawrence Timmons shoots the weak A in an attempt to occupy the left guard and running back. Brett Keisel slants down to the C gap. Delaying until after that twist, Vince Williams rushes over the top and shoots the weakside B. 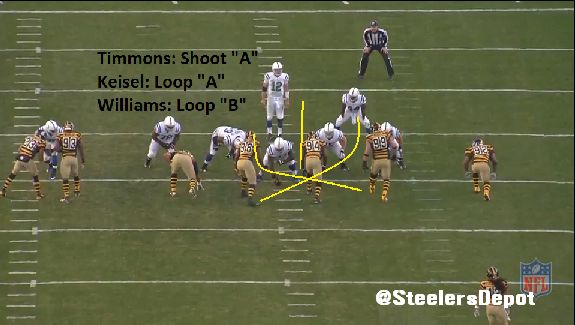 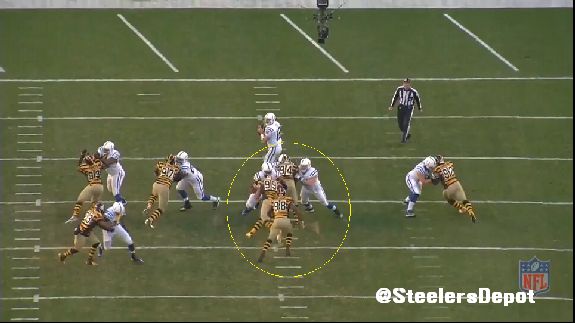 It’s actually picked up well by the Colts but it doesn’t take away from the concept. Forces offenses to be clean in their protections and communicate well across the board. One failure and there will be pressure. Stresses the QB/C to identify protection schemes and the line/running back to pick them up effectively. 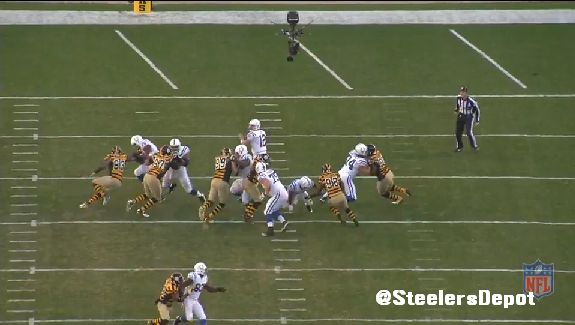 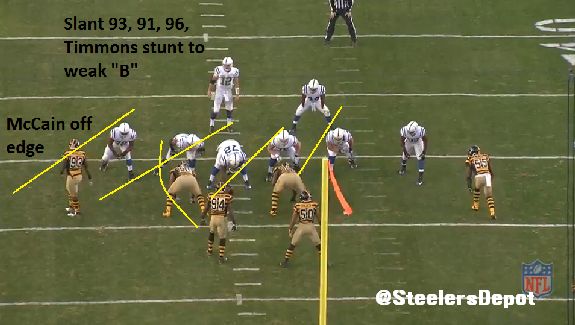 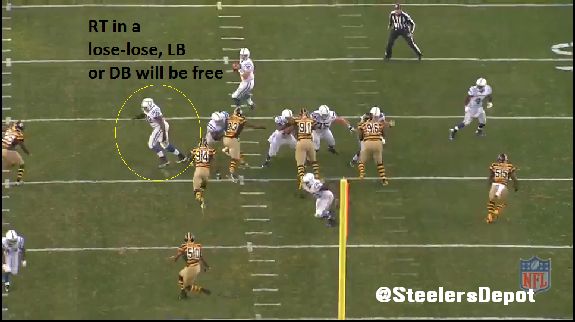 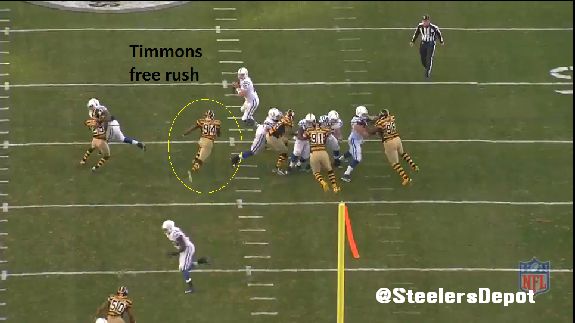 Specifically, the interior three players: Cam Heyward, Brett Keisel, and Vince Williams. Heyward slants outside to hold the right guard. Williams shoots into the center and left guard through the weak A gap. Brett Keisel loops over the top to shoot the strong A gap. 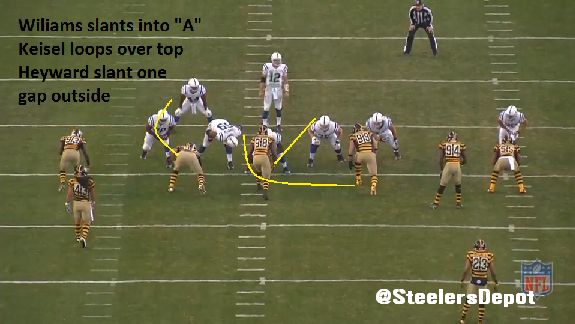 Because Keisel is standing up pre-snap, it’s quicker for him to loop. The center recognizes and tries to pass off the stunt but isn’t quick enough laterally to push off, reach the midpoint, and get in front of Keisel. 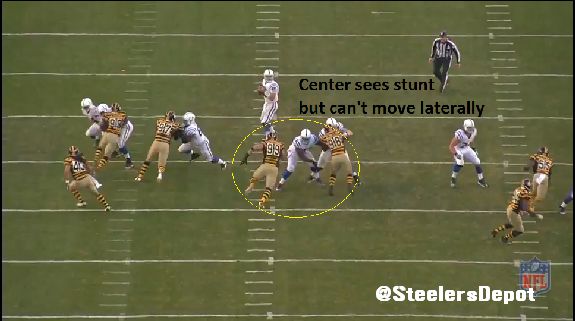 And because Heyward is slanting outside – by design, make no mistake – Keisel has plenty of room to work with to squeeze past. Again, results in pressure. 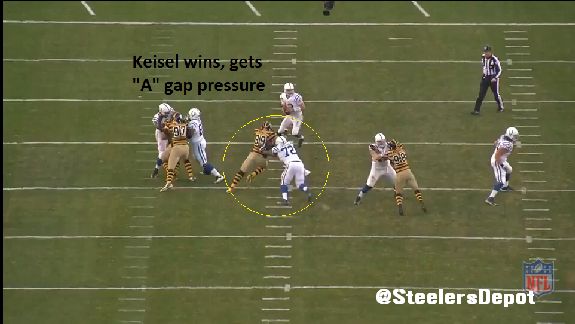 Steelers again sugar the A gaps, bringing both. Mike Mitchell is sent off the defense’s right side. 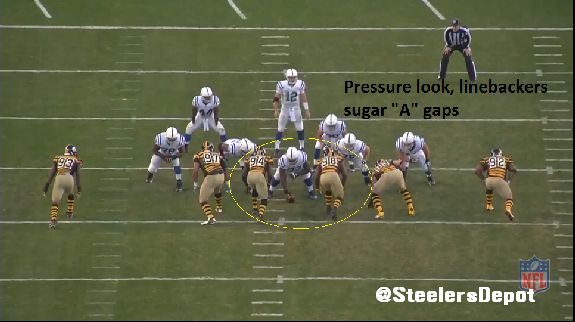 For a split second, both the back and tight end believe they both have responsibility to pick up Mitchell. Poor communication. With James Harrison dropping into coverage, the left tackle also works to Mitchell. Meaning, three Colts are looking to picking up one defender. Nice win for the Steelers’ defense. 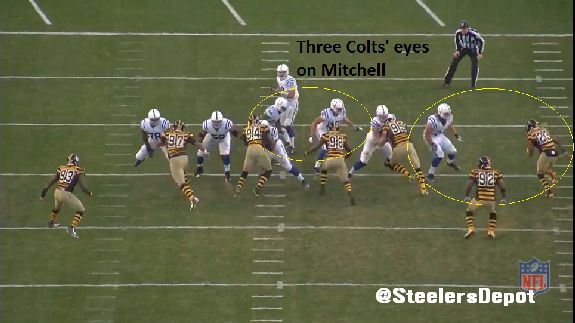 Coby Fleener does get his eyes back to pick up Vince Williams a moment later but by that point, Williams has won inside. Fleener can’t get square to him and Williams gets pressure. 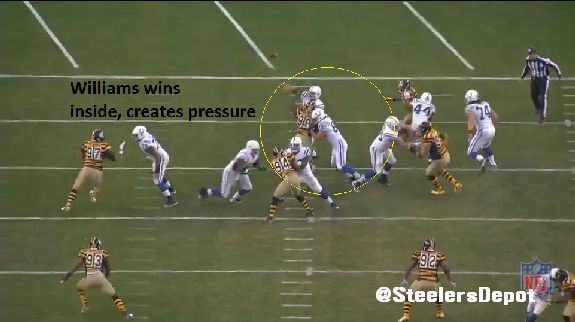 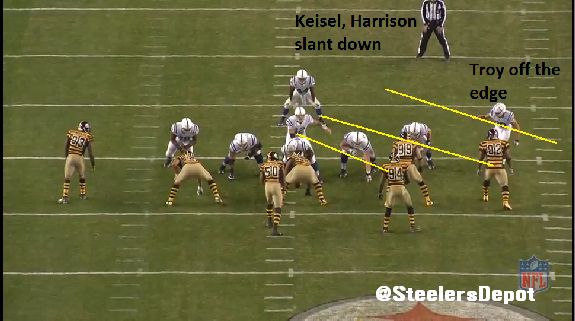 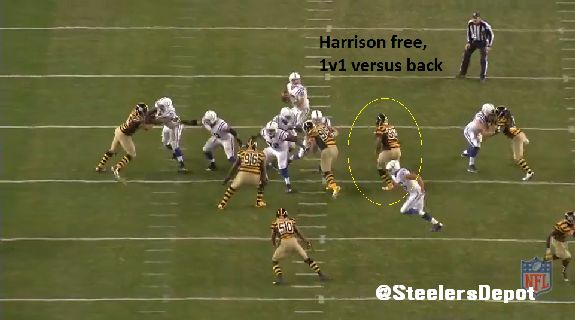 Deebo doesn’t get to the ball in time but still trucks Ahmad Bradshaw. 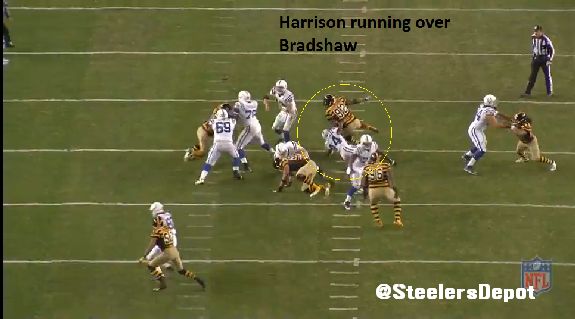 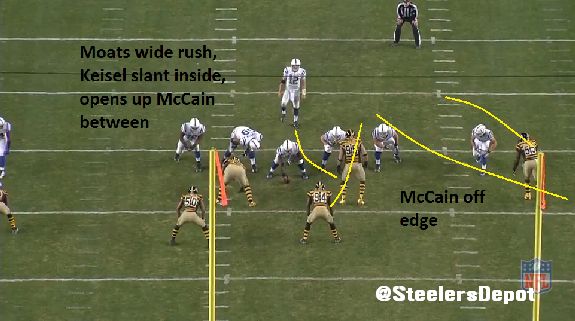 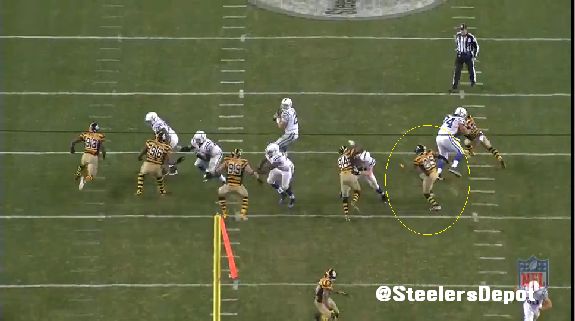