Pittsburgh Steelers quarterback Ben Roethlisberger only completed 21 of the 42 passes that he attempted Sunday in the 31-10 loss to the Cleveland Browns and when you look at that stat line it would lead you to believe that he had a bad game. Even Roethlisberger said after the game that he needed to play better, but after going back through the game tape with a fine tooth comb, his receivers are the ones that really played poorly as a unit, not him.

Here is a look at the 21 incompletions thrown in the game by Roethlisberger.

Roethlisberger’s first official incompletion of the game came on third down and three with 13:45 left in the first quarter and this was the play that wide receiver Markus Wheaton failed to get his head around on quick enough. As you can see, the ball hits Wheaton right in the chest and he dropped it. 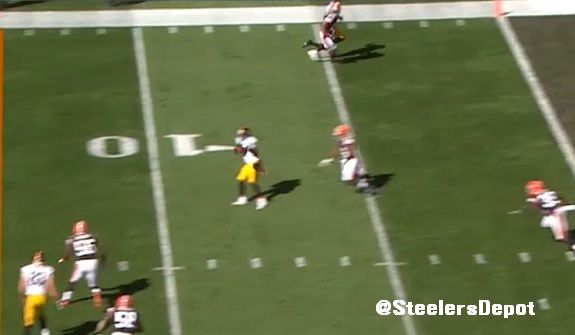 Roethlisberger’s next incompletion came with 11:41 left in the second quarter on first down and it was a deep pass down the right sideline to running back Le’Veon Bell. Roethlisberger dropped it right into the arms of Bell but the running back failed to get both feet down in bounds. It’s certainly hard to pin this on the quarterback. 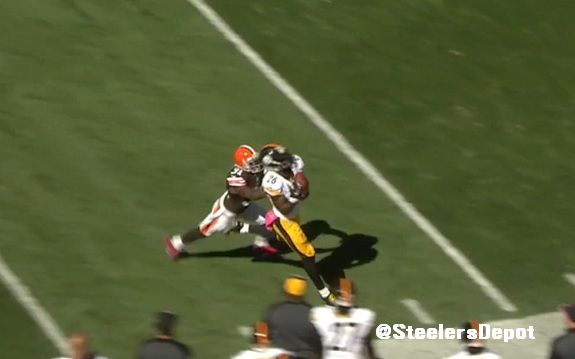 Roethlisberger’s next incompletion came just two plays later on third down and this pass was probably one of his worst in the game as he forced it to Wheaton, who was tightly covered by Browns cornerback Buster Skrine. 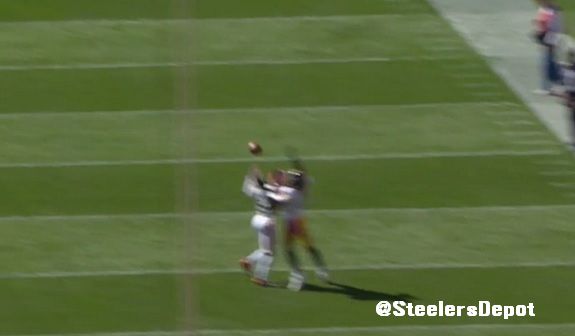 The next incompletion came during the Steelers next possession and this time it went right off of the outstretched hands of Wheaton down the left sideline. I will let you decide if this is on Roethlisberger or Wheaton, but I feel the young receiver probably should have made this catch. 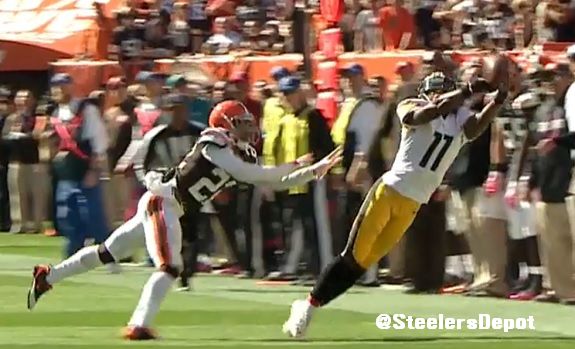 Roethlisberger’s next incompletion came with two minutes left in the first half and it appears as though he had a miscommunication with Wheaton on the play. After the ball dropped incomplete, Roethlisberger is shown shaking his head as if he was expecting Wheaton to break towards the middle of the field. 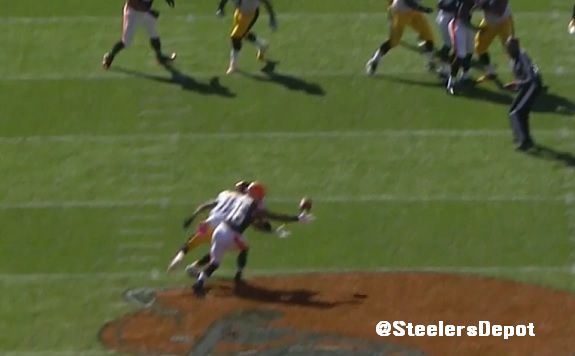 Two plays later it was Bell’s turn to fail to get his head around quick enough and while it’s hard to tell in the picture, that’s the football bouncing off of the running back’s facemask. 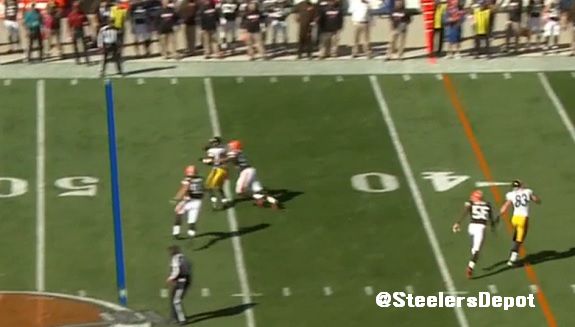 On the very next play, with 1:46 left in the first half, Roethlisberger throws wide of Wheaton down the left side. On this play, I think Roethlisberger was expecting Wheaton to come out of his break hard and go right to the sideline. 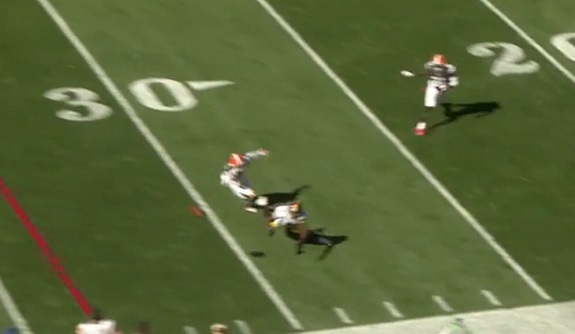 While it probably wasn’t one of his better decisions, Roethlisberger’s pass to Lance Moore on the left side with 23 seconds left in the first half did hit the receiver in his hands. 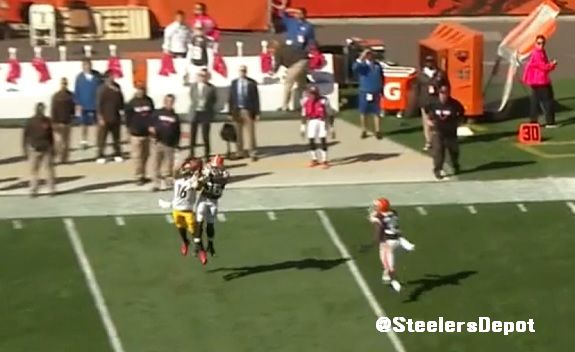 On the very next play, Roethlisberger again drops a deep pass into the bucket down the left side that Justin Brown manages to catch. Brown, however, failed to get both feet down in bounds. That would wind up being the Steelers final incompletion of the first half. 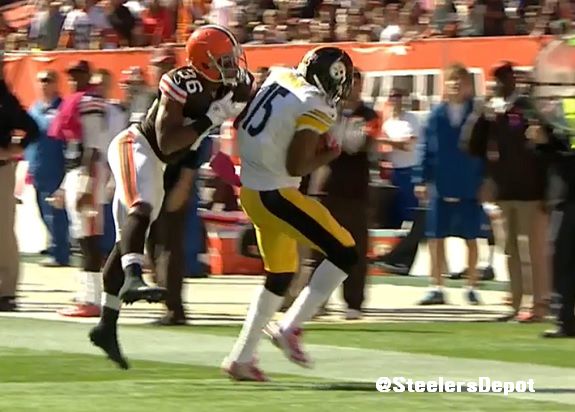 Roethlisberger’s first incompletion of the second half came with 9:32 left in the third quarter and this time it was a result of a drop by tight end Heath Miller. 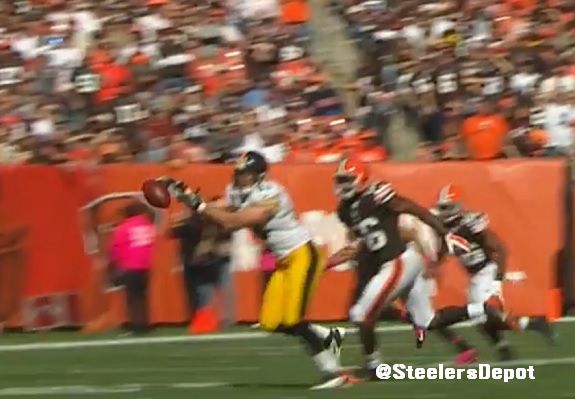 You all probably remember the next incomplete pass as it came one play after Roethlisberger was sacked on back-to-back plays. While it originally looked like a drop by Moore, the ball actually hit off of the arm of Browns cornerback K’Waun Williams first. Even though it eventually hit Moore right in the chest, the change of direction certainly makes it tough to pin a drop on him. It was a third and 17 play and worth Roethlisberger taking a shot deep against tight coverage. 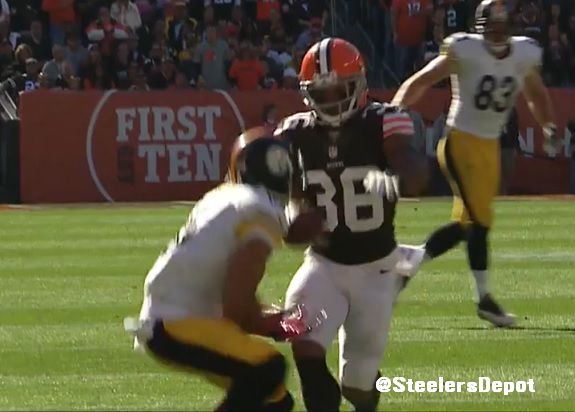 With the Steelers down 24-3, Roethlisberger’s pass with 2:13 left in the third quarter that was intended for Wheaton wound up being intercepted by Skrine after it was tipped at the line of scrimmage by Browns defensive end John Hughes. Hughes had good penetration on the play and did a great job of getting his hand up.

With the Steelers down 31-3 with 12:20 left in the fourth quarter, Roethlisberger had his second down pass intended for Justin Brown fall incomplete. While the picture below is blurry, the throw was on target and did hit Brown in the hands. 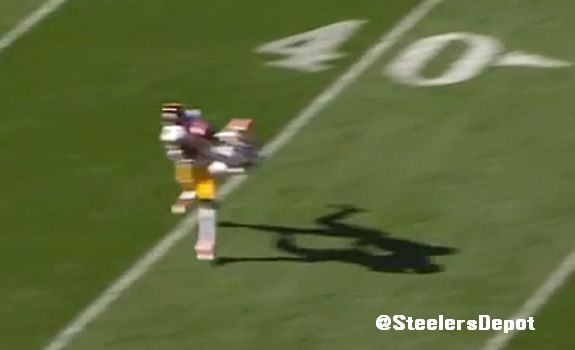 On the very next play, Roethlisberger and Antonio Brown weren’t on the same page on a short crossing route on third down. Brown changed his angle slightly as Roethlisberger released the football and the pass wound up being too far out in front as a result. Roethlisberger is shown motioning the route he expected Brown to run after the play was over. 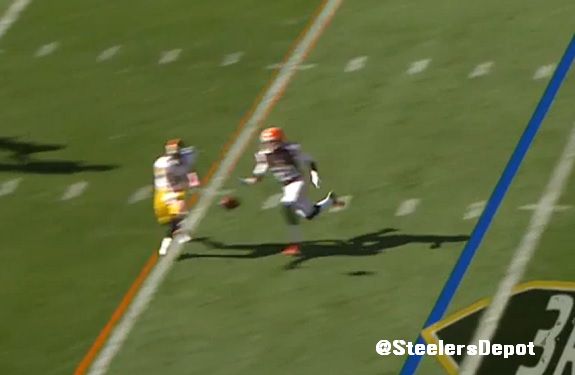 With 10:10 left in the fourth quarter, Roethlisberger forced one to Antonio Brown in the end zone and cornerback Joe Haden easily swatted it away from over the top. You can’t blame Roethlisberger for taking a shot here down 27 points. 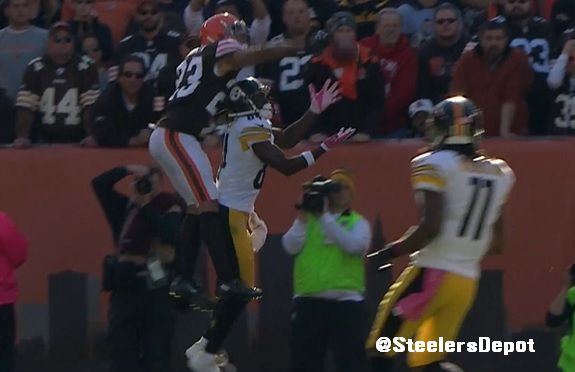 During the next drive, Roethlisberger drills one to Moore across the middle that bounces right of his hands. 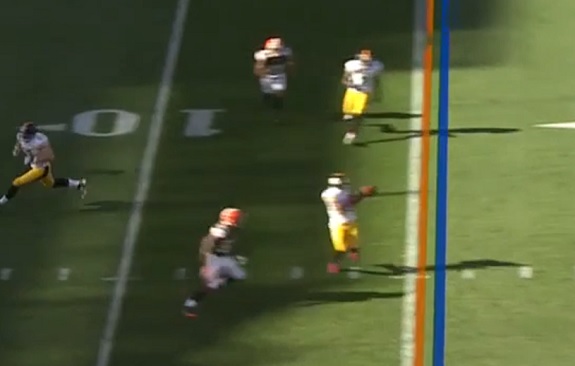 A few plays later on first and goal from the Browns one-yard-line, Roethlisberger tries to drill one into Antonio Brown, who is tightly covered. 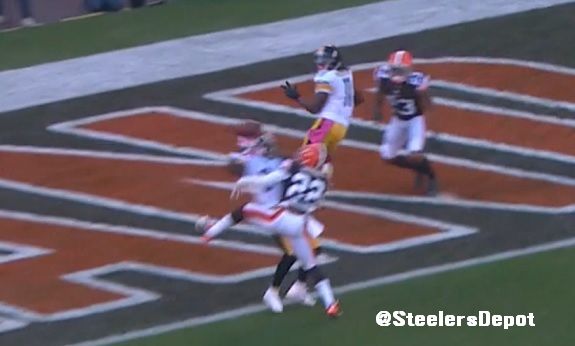 On second down, Roethlisberger misses a wide open Wheaton in the end zone and once again it appears as though he and the young receiver weren’t on the same page. Wheaton, however, could have adjusted better and made this grab, in my opinion. 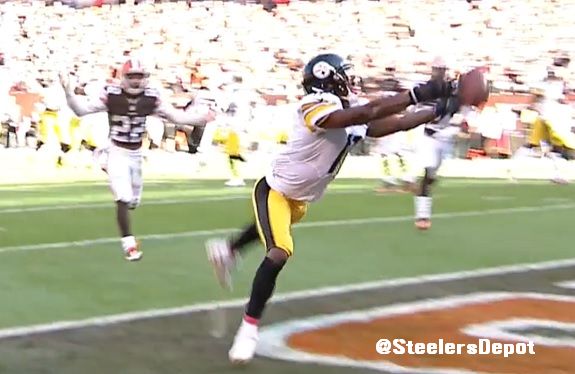 To add insult to injury, Wheaton and Roethlisberger also failed to hook up on the ensuing fourth down play and once again it appears as though the quarterback was expected his receiver to be somewhere else. 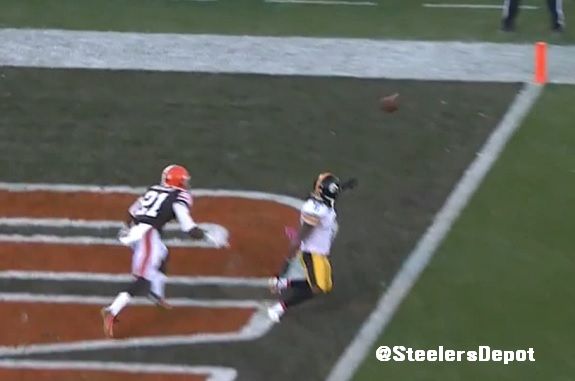 Roethlisberger closed out the game with two more incompletions to Moore. One hit Moore right in the hands while the last incomplete pass of the game was almost picked off on the right side with 20 seconds left. 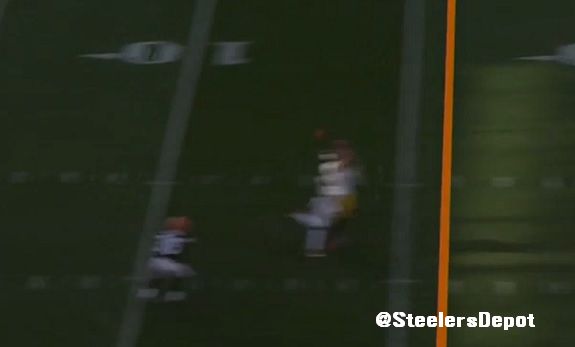 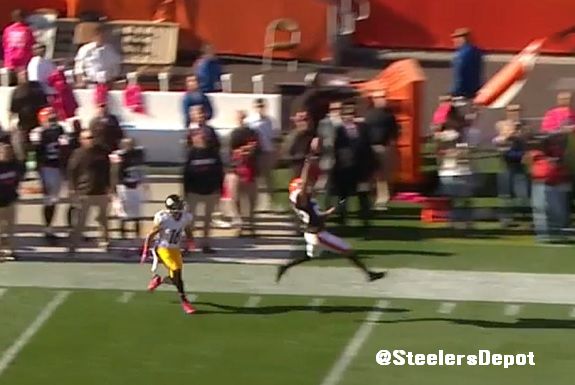