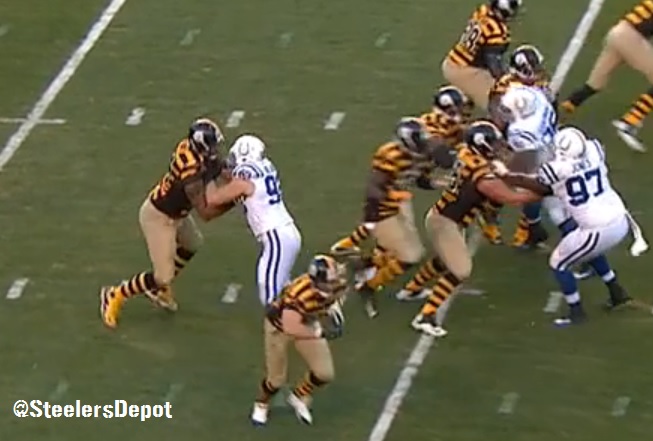 Almost as remarkable as the 522-yard passing performance by quarterback Ben Roethlisberger versus the Indianapolis Colts yesterday was the fact that the Pittsburgh Steelers offensive line held together long enough on 49 drop backs to allow their quarterback to average more than 10 yards every time he did so.

After taking 20 sacks in the first seven games of the season, the 11th-year veteran was kept clean yesterday, and for the first time all year was not sacked. For that, the performance of the offensive line deserves a big-time assist and a round of applause in its contribution to the historic performance that took place at Heinz Field.

The line was close to dominant at times in pass protection, though they were not without their struggles in the running game. That mattered little in a day committed to a marquee quarterback matchup between Roethlisberger and Andrew Luck.

What did seemingly matter before the game was that starting right tackle Marcus Gilbert did not dress after suffering a concussion in the second quarter of the Steelers’ last game, forcing Mike Adams into the starting lineup for the first time this year.

Adams, the third-year former second-round draft pick, had a solid rookie season after starting a handful of games at right tackle, showing at the time that his clear strength was in run blocking. He was envisioned as the left tackle of the future, and that’s where he found himself to begin his second season.

But he bombed out in disastrous fashion, being benched after four games and replaced with a seventh-round draft pick taken about 200 spots behind him. That would be Kelvin Beachum, and he’s started 19 of the Steelers’ 20 games since then, missing one due to injury.

Adams was back at right tackle for this game, however, and his cameo appearance last week against J.J. Watt and the Houston Texans was not received as a good omen.

But it must be said that he, along with the offensive line, played very well in pass protection. It would be hard not to given the way the offense produced through the air.

In all, Roethlisberger was only pressured a small handful of times throughout the game, not including screen passes. Only about four or so of his incompletions came as a result of pressure. Two came from obvious drops by his targets. Another came on a miscommunication, and he had only two truly negative passes on the night when not under immediate duress.

The first came when he just missed Antonio Brown for an 86-yard touchdown early in the second half. The other came later in the half aimed toward Brown that was an overthrow and the only pass on the night that had even a remote chance of being intercepted.

While Roethlisberger did his part by varying tempos and frequently getting the ball out quickly, he still held on to the ball plenty and took deep drops. He was only forced to move around in the pocket a few times, and even that often produced success—Brown’s long touchdown comes to mind.

The lesson learned? This offense could be as good as anybody’s in the league if the offensive line gives them time to prove it.