My observations from the Pittsburgh Steelers 26-6 defeat versus the Baltimore Ravens Thursday night.

– Steve McLendon has active hands and a quality rip move. Check him out rip Jeremy Zuttah, generating pressure and drawing a hold.

– Empty set out of the huddle but with only six Ravens in the box, Ben Roethlisberger motions Le’Veon Bell sidecar and runs a draw. Gain of 16. Nice jump cut by the back too, getting to the edge. 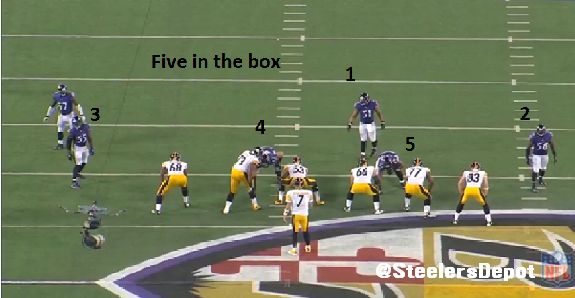 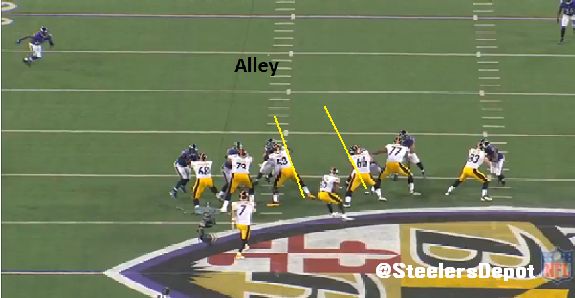 – Looks like Ryan Shazier has the wrong gap fill here. Pre-snap, Lawrence Timmons has to nudge the rookie to move him down a step. 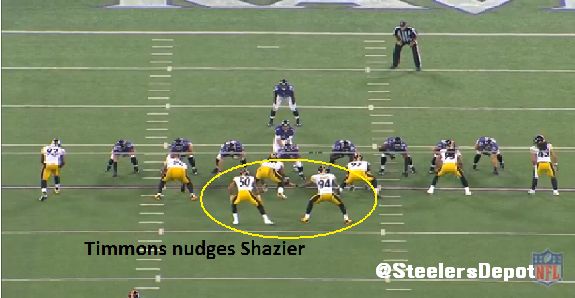 And then Shazier ends up shooting the same gap Timmons does. Bernard Pierce rumbles for a ten yard gain. It’s painfully obvious, and not much of a surprise, Shazier’s head is spinning and he’s trying to get by on athleticism. But there’s no 40 time you can run to make up for errors like this. 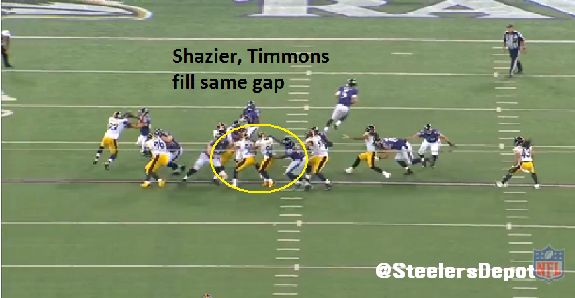 – Back to Shazier. This time, it’s false run keys that get him. Split zone, Shazier watches the fullback. Follows him to the outside while the Ravens run an inside zone to the other side. 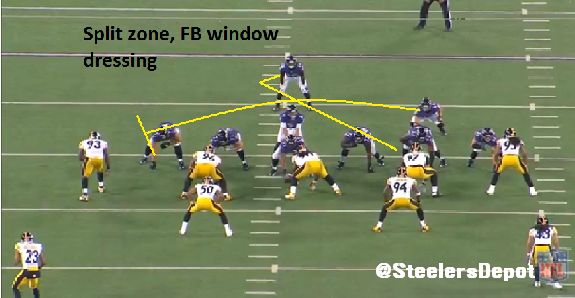 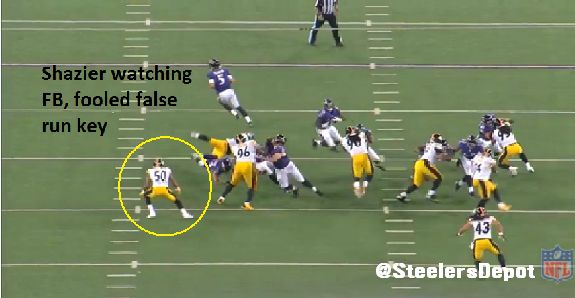 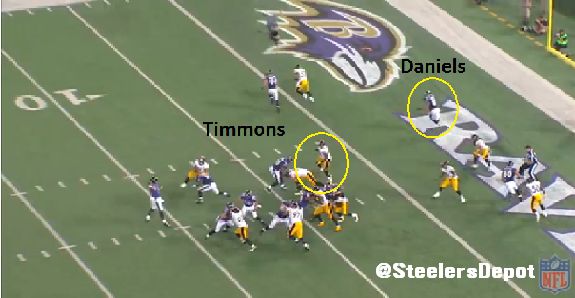 – Although I love Le’Veon Bell’s ability to jump cut and find the open lane, there are moments where he makes one cut too many. Example here.

Starts off fine by looking to jump one gap over. 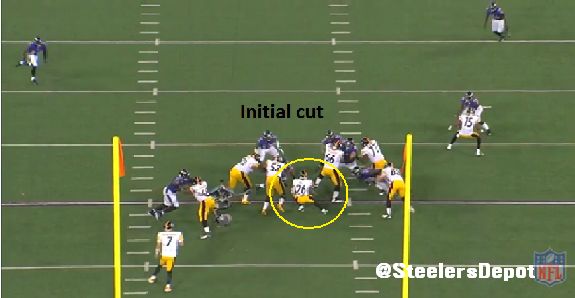 But by here, he needs to plant and get upfield. Instead, he attempts to bounce it to the outside again. 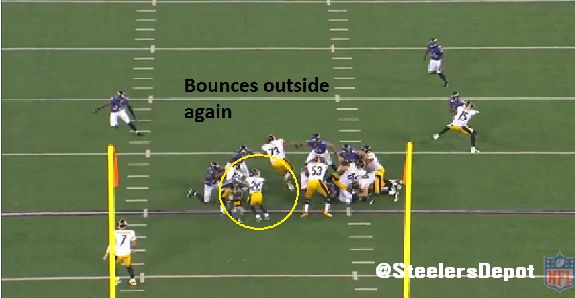 Nothing available so he bounces inside again. By this time, the Ravens have rallied to the ball and it’s only a gain of a few.

– Effective stunting/slanting from Dick LeBeau here. Slant the LDT and LOLB down a gap. Loop the RDT over to the defense’s left side while blitzing the free safety. 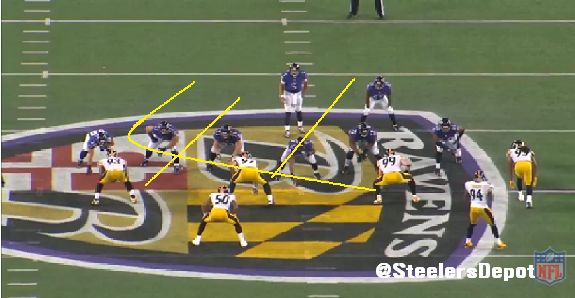 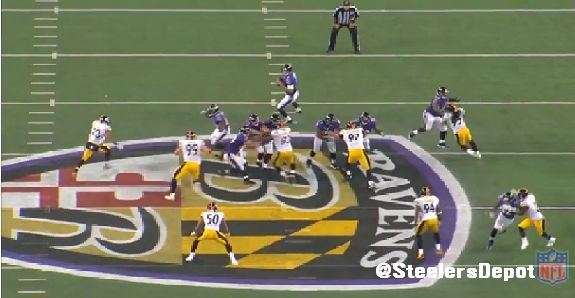 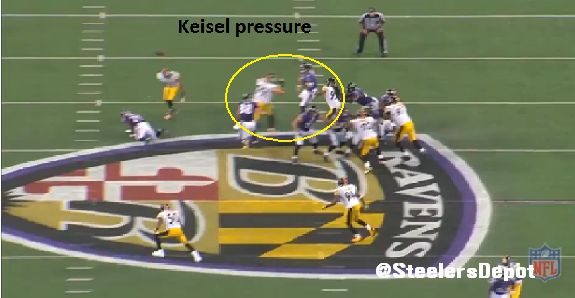 – Steelers don’t switch on this slant/corner in the red zone. No banjo call and the corner route is wide open. Flacco never looks that way, luckily. 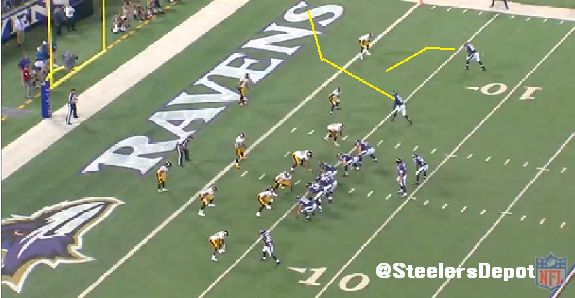 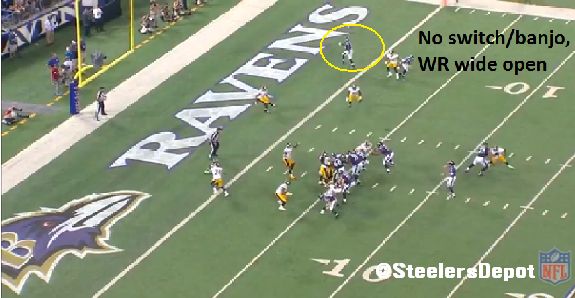 – Heath Miller’s fumble that basically sealed the game. Ramon Foster lunges working in pass pro against Brandon Williams. Needs to keep his feet moving to seal and generate power. Doesn’t and Williams sheds, getting in Roethlisberger’s face and forcing the checkdown. 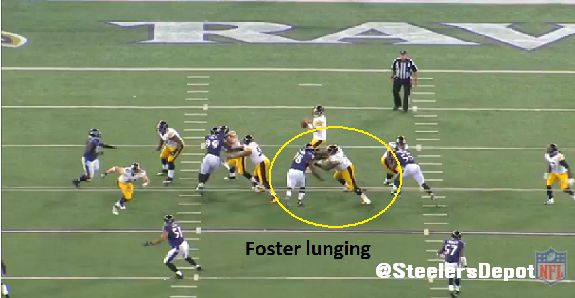 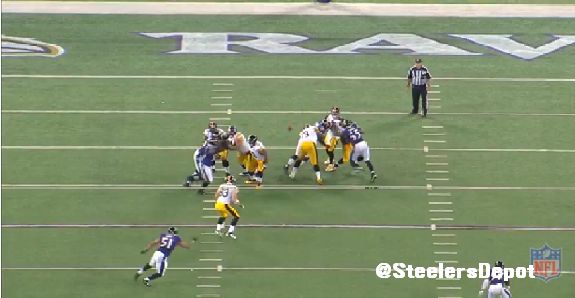 – Kudos to Cam Thomas for working off this cut block and finishing with a tackle. 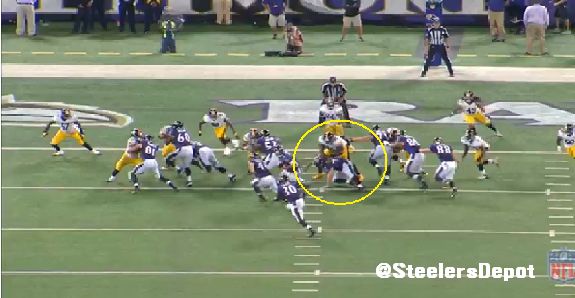 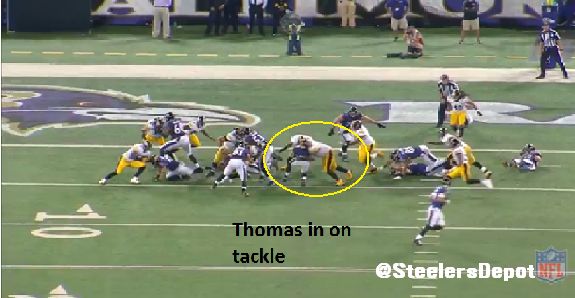 – Ryan Shazier rushed off the defense’s right edge to pressure Flacco on Cortez Allen’s near/dropped interception along the goalline.

– The Steelers attempted another pass to LeGarrette Blount. Someone, please make it stop…

– Same play. Why slide to the offense’s left against this passive look? Pernell McPhee rushes free off the edge. I don’t get the slide protections sometimes. This includes last year, too. 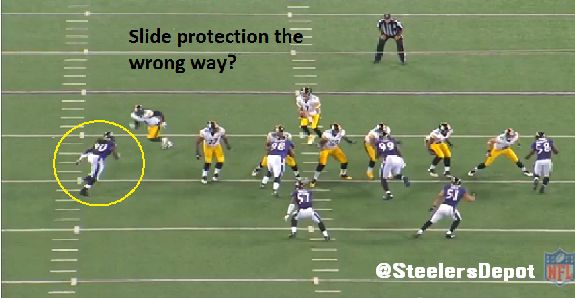 – Another difficult situation for Ramon Foster. Chasing air vs finding work catch-22. Seems to do more of the former here, however. Ravens disguise their blitzes well, dropping Courtney Upshaw into coverage.

So Foster goes ahead to help out Maurkice Pouncey but probably strays too far from home. 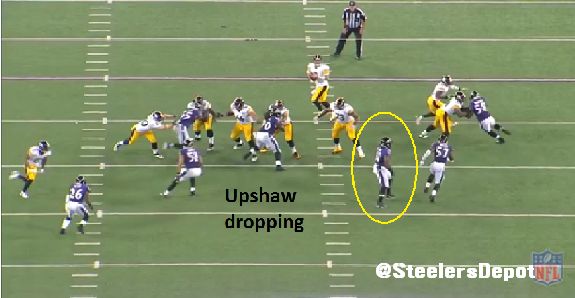 Upshaw then rushes through the clear lane created, flushing Roethlisberger out and forcing an incompletion on third down. 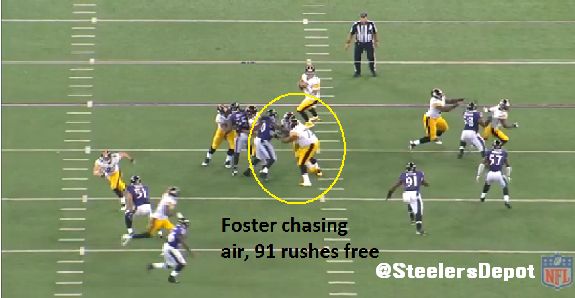 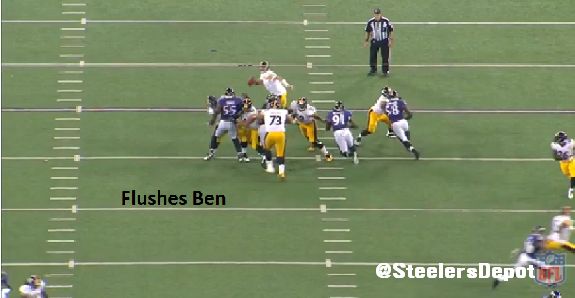 – Justin Forsett’s 41 yard run. Like I said, the Steelers were being aggressive. Fire X blitz. Timmons is sealed and there’s a huge alley for Forsett. Mike Mitchell’s angle is even uglier on tape than what I saw live but it is a tall task to do in the open field like that without the back even being funneled. He has tons of green. 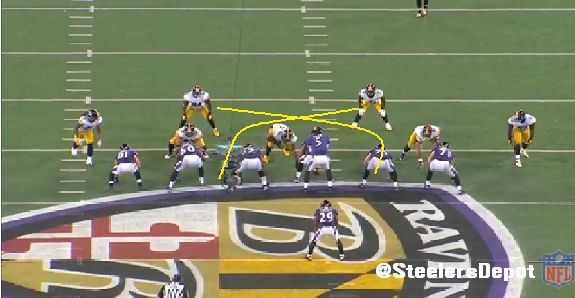 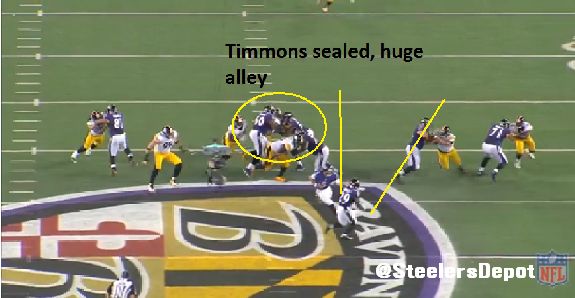 – Jacoby Jones end around in the red zone. Polamalu reads the play quickly and attacks downhill. Forces Jones even wider. Ryan Shazier runs from the far hash to deliver a big blow along the sideline. That’s some serious wheels.

– Bell with an effective chip against the looping Elvis Dumervil, then releases and picks up 14 on a screen.

– Smart play on the part of Antonio Brown to feel the defender’s presence behind him and respond by securing the ball with both hands before being taken to the ground. 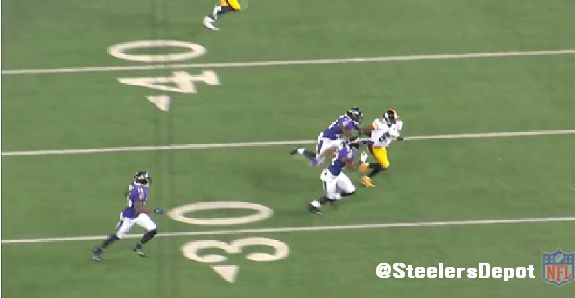 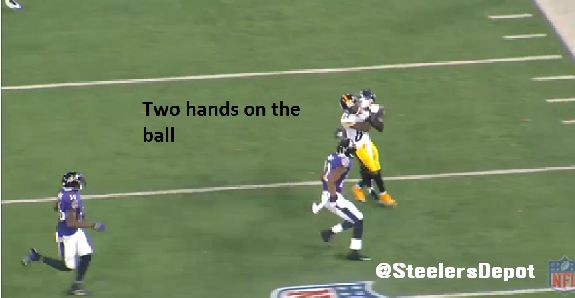 – I get it’s late in the game and Roethlisberger is just trying to make a play but he has no business attempting this throw. Pump fake doesn’t work, safety doesn’t widen. He just gets depth. Linebacker underneath and there’s no window. Looks like quarters coverage here from Baltimore. 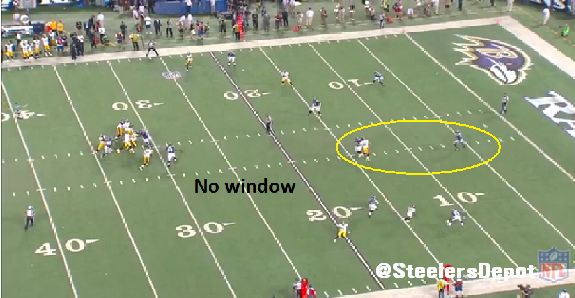 – Perhaps Haloti Ngata’s interception was a blessing in disguise. C.J. Mosley may have lit up AB had the pass gotten through. 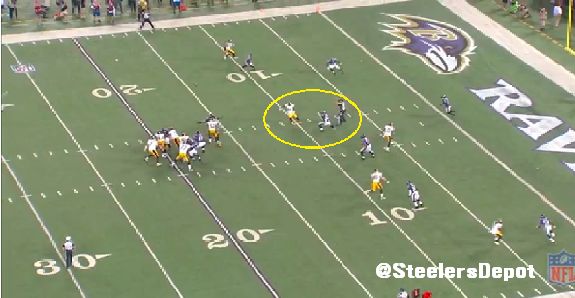 – Same play, like the effort/chasedown from Bell. Ran Ngata down, made the tackle, and I’m pretty sure he punched the ball out, too.

– Some general thoughts from the game.

– Kelvin Beachum kept Terrell Suggs very quiet. Beachum has had a strong start. Had some concerns during the preseason but he’s quickly alleviated them.

– Markus Wheaton is something special. Can already see it. Admire the body control, catch radius, quickness out of his breaks, and ability to make defenders miss in open space.

– Other than Marcus Gilbert, the offensive line is playing well. I’ll have more on Gilbert’s issues in my sack breakdown in the next day or two. Already mentioned some of his issues on Wednesday’s edition of The Terrible Podcast.

– As it usually goes, a player never looks as good or as bad as he does on first glance. Holds true for Cam Thomas, who actually made a couple of ““above the line” plays. It’s all about that first step. When he’s decent off the ball, he can hold his own. When he’s slow, he gets moved around.

– Lawrence Timmons had to have something going on with him. He never looks that bad. Must have been sick.