Pittsburgh Steelers inside linebacker Ryan Shazier made his second start in his second game of his rookie season last Thursday night against the Baltimore Ravens. With that comes occasional bouts of confusion and mistakes. Some bigger than others.

Overall, however, there’s certainly nothing to regret about the team’s decision to plug in the first rounder immediately, over other options such as Sean Spence.

It is worth noting, however, that the Steelers have subbed in Spence for Shazier for a series of plays in each of the first two games. That might be saying as much about Spence as it is about Shazier, of course. 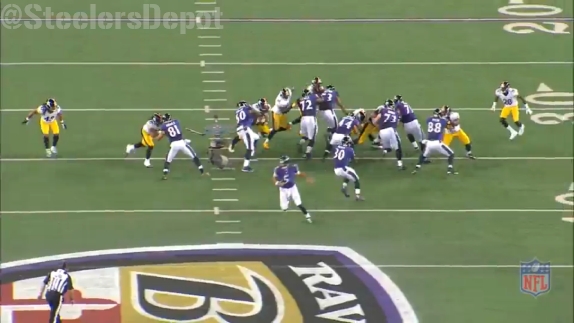 Midway through the Ravens’ opening drive, the speedy inside backer also showed some power, taking on the fullback in the hole, as seen in the screen grab above, as Baltimore attempted to convert on third and one in Steelers territory. 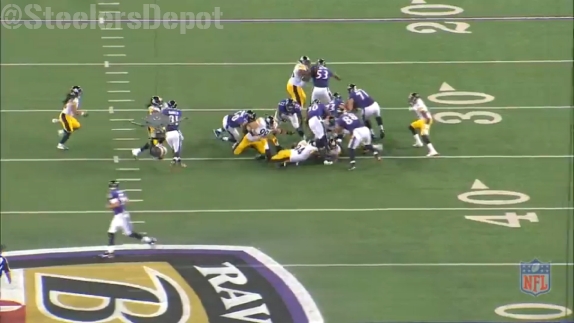 He did so, barreling his shoulder pad into the fullback and turning him sideways through the A Gap, and allowing Shazier to penetrate, tackling running back Bernard Pierce by the legs as Lawrence Timmons joined him.

With the Ravens just outside of first-and-goal territory midway through the second quarter, Pierce tried to take the ball off left guard on an inside zone run. Shazier was too quick, however, and slipped in through the left-side A Gap, getting an arm around him and slowing him as Cameron Heyward came in to tackle him for no gain.

For every few plays he makes as evidenced above, however, he will balance it out with a missed assignment, or poor technique or awareness. In the third quarter, the Ravens were facing third and four in Steelers territory with Shazier covering Dennis Pitta.

Evidently presuming that the tight end would be heading for the flat, Shazier was caught flat-footed as Pitta turned inside, getting wide open to snag a six-yard pass with open grass, resulting in a 24-yard reception.

A few plays later, Shazier showed off some of his closing speed on a short pass to Steve Smith. With Timmons hassling him, Shazier was able to cover about 15 yards diagonally to make the tackle on the wide receiver right about where he originally caught it. 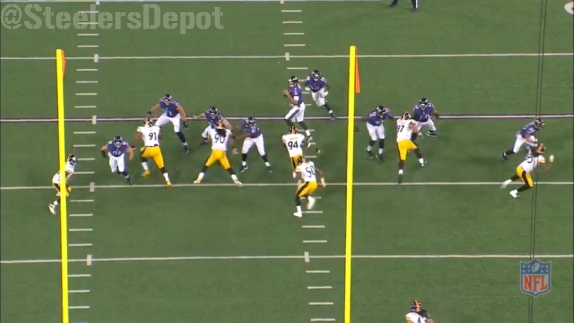 The following play saw Timmons and Shazier on a double A Gap blitz, which is probably something that we will begin to see more of as the season progresses and the rookie is entrusted to know more of the defense. The pass was out well before the pressure got home, but this play is just an example of how Shazier is being used schematically throughout the course of the game.