Markus Wheaton may have only gained 38 yards on his five receptions against the Baltimore Ravens on Thursday night, but the second-year Pittsburgh Steelers wide receiver continued to show that he has the potential to be a serious weapon for Ben Roethlisberger and the offense, both now and in the future.

Through two games, the first-time starter has caught 11 of 14 targets with no drops, going for 135 yards. He’s forced three missed tackles thus far, including two on Thursday night in Baltimore.

Aside from his five receptions for 38 yards, Wheaton also added another 22 yards on a pair of end arounds. He had a third run that went for 21 yards, but it was called back due to a holding penalty by Darrius Heyward-Bey.

So far, Wheaton has been able to do a little bit of everything, even returning kicks, for the Steelers, and it only seems that his contributions will be expanding in the future. 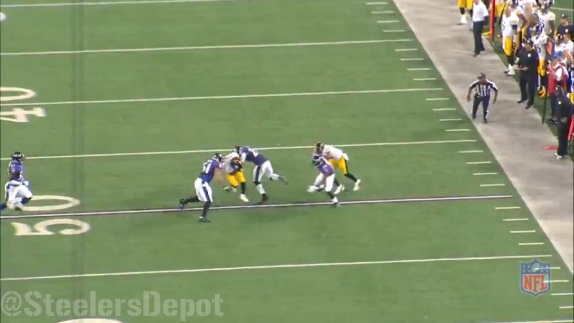 Early in the game, on the Steelers’ opening drive, facing a third and two, the Steelers ran a screen behind Justin Brown to Wheaton at the left sideline. He gained eight yards on the play. Wheaton is a good fit for Pittsburgh to get into open space because he’s shown that he has good vision and doesn’t shy away from contact, as seen above. 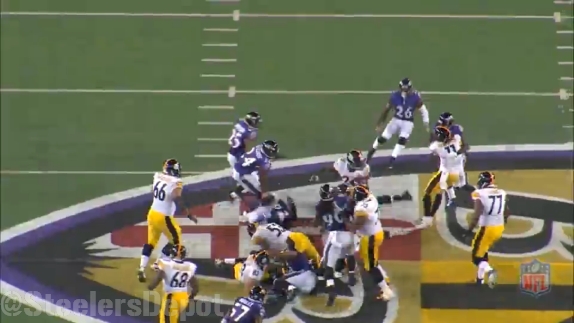 A thus far underappreciated aspect of Wheaton’s game has been his willingness to throw a block. This is something that I took notice of last season as well. Of course, there’s a distinction between willingness and excellence, and his size limits him.

But he threw a key block on Le’Veon Bell’s 21-yard run, walling off Chykie Brown, which allowed the running back to escape to the outside and get all that extra yardage.

Late in the second quarter, the Steelers ran another screen to Wheaton. Because tight end Heath Miller was late getting out in front of the play, the receiver had to wait for the block to develop before finally catching the outside corner and finding the sideline for a five-yard gain that could have been more with better blocking.

Roethlisberger came right back to him on the following play, on third and four. Wheaton ran a simple corner route to the left sideline, but he had to adjust to Roethlisberger’s ball when he turned around, elevating and reaching behind him for the third-down conversion and showing off nice hands in the process.

A few plays later on the drive, Roethlisberger was sacked for an eight-yard loss on a first-down play. On second and 18, the quarterback found Wheaton on a hitch, spinning past Brown and making another defender miss to add six yards after the catch on the 14-yard gain.

The play turned in a manageable third down, but Roethlisberger misfired down the field to Miller to force the Steelers to punt.