I can’t imagine anybody arguing against the fact that second-year running back Le’Veon Bell has been the Pittsburgh Steelers’ best weapon on offense through the team’s first two games. He is averaging over five yards per carry, and nearly 10 yards per reception, totaling over 300 yards in total offense thus far.

Bell only got 16 touches against the Baltimore Ravens on Thursday night, but he made them count, rushing for 59 yards and adding another 48 yards through the air on 11 carries and five receptions, including gains of 19 and 21 yards.

Early in the game, on the Steelers’ opening drive, the offensive was set up beyond midfield with a second and one after wide receiver Antonio Brown was able to pick up nine yards on an end around. The only thing that Bell needed to do was gain one yard in order to give Ben Roethlisberger a new set of downs to work with.

Running out of the 11 personnel, with all receivers wide, Heath Miller pulled from the right side of the formation to try to clip the flowing end, but he missed, forcing Bell to cut back inside. He showed good patience—aided by a nice clearing out block from Maurkice Pouncey—to get inside the end and pick up the first-down yardage.

With the Steelers approaching midfield on their third possession, the Steelers had a first and 10 when Roethlisberger audibled before the snap to a run, informing Brown and Bell. The offensive line was able to open up an alley for Bell, despite Kelvin Beachum coming up short, but once Bell was in open space, he spun out of a Courtney Upshaw tackle attempt and, utilizing a pickup from Markus Wheaton, raced to the perimeter for a 21-yard gain.

On the next play, Roethlisberger was feeling the pressure, so Bell released out of the backfield as the quarterback left the pocket. Bell was able to take the pitch and found himself in wide open space, racing to the sideline for 19 yards. About a third of his total yardage came on these back-to-back plays.

Bell was able to break off another sizable gain early in the third quarter on first and 10, the second play of the Steelers’ opening drive of the half. Bell was flexed out wide, bunched behind Brown, before Roethlisberger motioned him into the backfield.

The ensuing carry was a good display of his patient running style, using a stutter step to allow his blocking to develop and hitting the hole once it did, taking advantage of his perimeter blocking for a 16-yard gain. 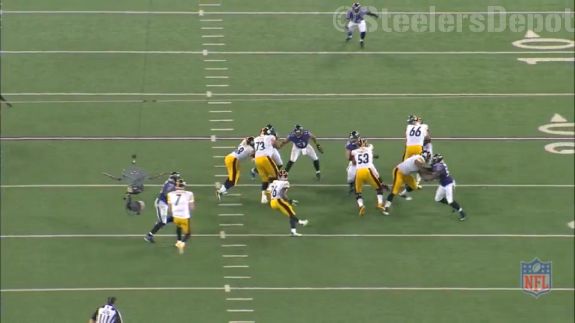 The following play shows off Bell’s vision, finding the open space with the inside linebacker flowing to the right, and taking advantage of Terrell Suggs’ wide angle to cut the run back upfield for an easy five-yard gain. 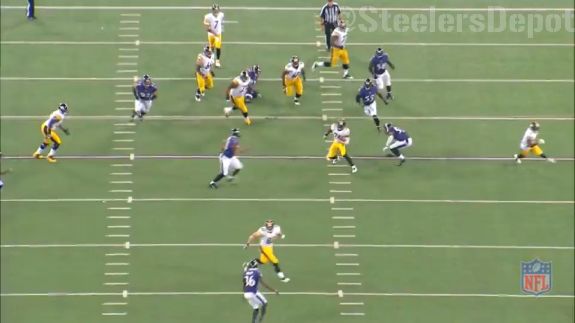 Later on, in the fourth quarter, Bell took a pass out of the backfield and made Daryl Smith, the Ravens’ best coverage linebacker, look foolish, making a sharp cut in front of him and running him around a circle as the back gained nine yards on the play.