With Lance Moore sidelined with a groin injury for the first two weeks of the season, Pittsburgh Steelers first-year wide receiver Justin Brown has gotten the opportunity to log over 100 snaps through the first two games of his career.

Against the Cleveland Browns in the season opener, the 6’3” Brown caught three of four passes aimed his way, but the one he didn’t come down with would have converted a key third down late in the game.

The former practice squad receiver only caught one of four passes thrown to him on Thursday night against the Baltimore Ravens, and the one that he did catch ultimately resulted in a fumble; however, it must be said that two of his targets were well offline and uncatchable. The third incompletion came on a surprise shovel pass he was not prepared for.

The Steelers didn’t keep six receivers on the roster just because they could all catch, of course. Brown and Darrius Heyward-Bey largely made this roster because of their ability to contribute on the perimeter as blockers, and that is where this first highlight comes from.

With the Steelers facing a third and two on their opening drive of the game against the Ravens, Ben Roethlisberger called for a wide receiver screen to Markus Wheaton. In a rare instance, Wheaton was in the slot, with Brown on the outside. On the snap, Brown came forward to block cornerback Asa Jackson, giving Wheaton the room for a first down. 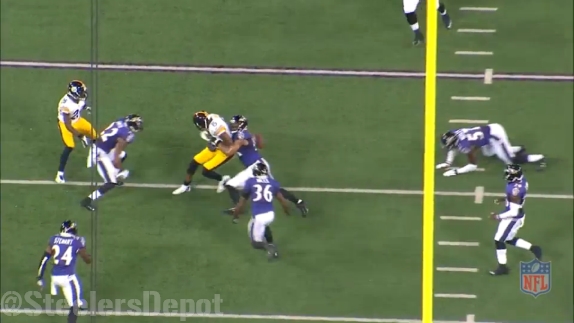 Of course, that opening drive didn’t end as Brown had envisioned it. With Pittsburgh just outside of the red zone, Roethlisberger found him on a short pass cutting across midfield from slot left. As he turned upfield for extra yardage, inside linebacker Daryl Smith was able to get his arm inside and pop the ball out, which the Ravens recovered for a turnover.

Early in the third quarter, with the Steelers in a third and one, Roethlisberger looked to Brown for a quick hitter coming out of the slot on the right side, but clearly missed the target, throwing behind the receiver, who was lucky to even get his fingertips on the ball. 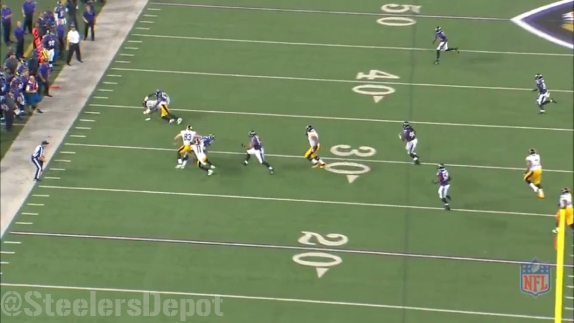 Late in the first half, on a second and nine play, Wheaton was the recipient of a short pass aimed to go up the left sideline. Brown threw a nice cut block on cornerback Chykie Brown down the field, but Wheaton had to get around Heath Miller first. By then Brown was able to get up and force him out of bounds after five yards. 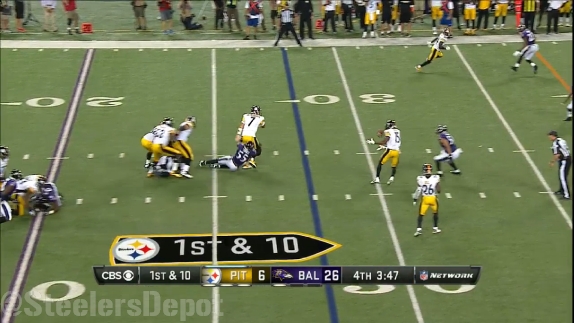 As I mentioned at the top of this article, however, Brown was ill-prepared to receive this shovel pass from Roethlisberger late in the fourth quarter as he fled the pocket to escape pressure. Playing with a quarterback like him, it’s important to always have your eyes open, ready to fight for space and to catch passes you don’t expect to be thrown.