For the Pittsburgh Steelers, most of the offensive line had a fairly quiet evening in pass protection against the Baltimore Ravens, excepting Marcus Gilbert and Ramon Foster. The rest gave up a pressure here and there, but otherwise were solid.

Yet even though the Steelers managed to average 5.5 yards per carry—four of which came on end arounds by the wide receivers—it was in run blocking where the offensive line struggled the most on Thursday night.

Right guard David DeCastro was no exception. Really, all of the interior would likely prefer a do-over in the running game.

The fact of the matter is that many of Le’Veon Bell’s best runs came as a result of a forced missed tackle or a cut back, improvising when the original plan failed. Against Brandon Thomas and Haloti Ngata, the interior line had a tough time, making it difficult to take advantage of the linebackers at the second level.

Even the positives were mixed with negatives. On this early first quarter carry by Bell, DeCastro worked a combination block off defensive end Timmy Jernigan to peel off to C.J. Mosley, but the linebacker was able to detach and get in on the tackle.

The play was a second and one and gained two yards, and thus was a success, but from an individual standpoint, DeCastro needs to make that second block.

Midway through the second quarter, the Ravens were in their nickel defense with two linemen on a second and 10 play. DeCastro went up one-on-one once again with Jernigan, the rookie defensive lineman—and lost.

Jernigan was able to swat DeCastro’s hands away and beat him to the outside shoulder. From there, he was able to wrap up Bell for just a one-yard gain. The Steelers ended up converting on third down and finishing off the drive with three points, but this was certainly a poor showing from the former first-rounder. 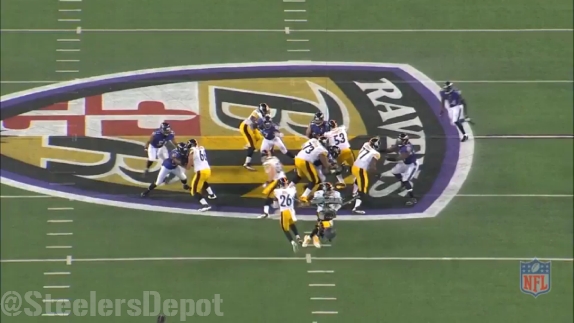 Credit must be given where it is due, however, and he threw a key block on Bell’s longest run of the day, a 21-yarder later on the same drive. He pulled left to pick up outside linebacker Elvis Dumervil, which allowed the running back to find a make-shift alley through traffic and find the right sideline for an explosive play. 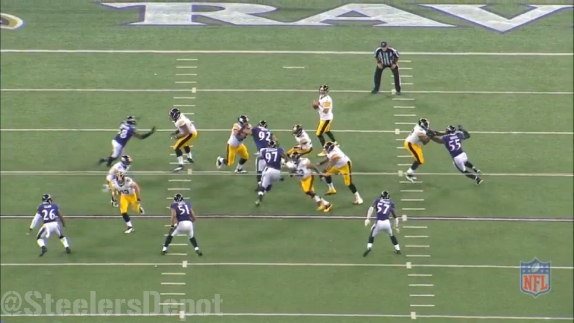 It may look as though Ngata successfully collapsed the pocket on this late fourth quarter play; however, the penetration was allowed intentionally.

DeCastro walked backwards with the defensive tackle to draw the line forward, allowing Bell to slip out of the backfield for the pass, which went for a nine-yard gain.