Throughout his career, Pittsburgh Steelers defensive end Cameron Heyward has been consistently used on both sides of the defensive line, depending on whichever starter needed a breather.

It seemed that that was going to change in 2014, as he worked all offseason as the starting right defensive end, but plans changed when Brett Keisel was re-signed. Keisel plays nearly all of his snaps on the right side, so when he is in the game, Heyward typically moves over.

Keisel played 50 snaps last Thursday against the Baltimore Ravens, which means that Heyward saw a lot of time against Marshal Yanda. As a result, he lost his fair share of battles, getting driven out of a few holes.

He also got very little done in the way of rushing the passer, while overrunning a few gaps. His game wasn’t nearly as clean as I’d first thought upon further review, but with him constantly moving around, it was difficult to hone in until after the fact.

This is one gap that Yanda was able to drive Heyward out of, on the Ravens’ opening possession. Baltimore’s line did a nice job of opening a hole on this play, even if it went for four yards. There is a modest handful of further examples of plays such as this scattered throughout the game.

It’s difficult to ignore the plays that he did make, however. He showed well often during the game of staying disciplined and not chasing a play, and this was one such example. He allowed right tackle Ricky Wagner to take himself out of the play before reversing field and tossing him aside. With Ryan Shazier slowing down the running back and clear space ahead of him, the back was easing pickings on this run. 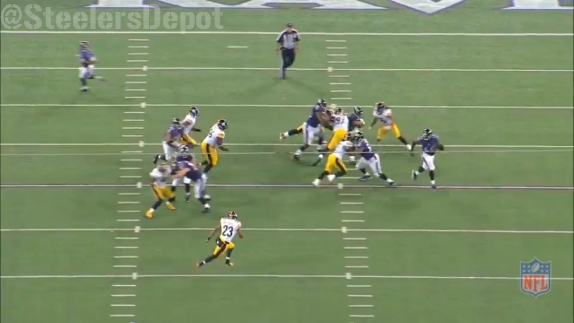 Later in the second quarter, he once again stayed home, allowing the play to come to him as Steve McLendon forced the back in his direction. Heyward was able to get around Kelechi Osemele to get in on the tackle for a loss. 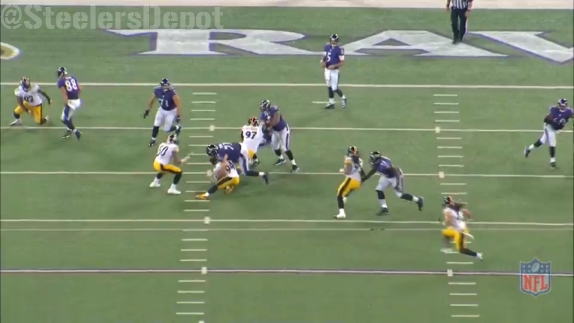 On the first two plays of the opening possession in the second half, Heyward basically just ran up the arc around left tackle. On second and 20, however, he really showed off some discipline as the Steelers’ lone down lineman. 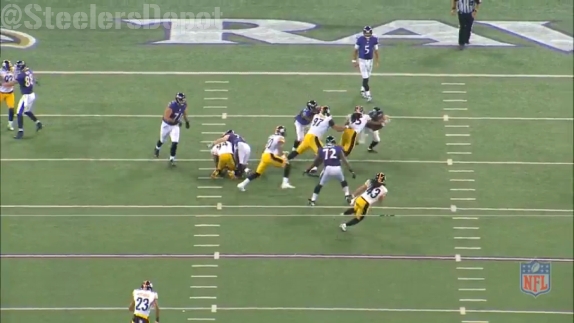 He used center Jeremey Zuttah to keep the back in check, forcing him from the right to the left side, allowing Jarvis Jones the opportunity to come in and make the tackle for no gain.

On third and 20, once again as the lone down lineman, Heyward flowed to the ball on the screen pass, slipping past Zuttah with the back cutting upfield, which allowed the end the chance to get a hold of him after a one-yard gain.