The Pittsburgh Steelers, at this point, are basically starting Cam Thomas at left defensive end because they are waiting for either Stephon Tuitt to be ready mentally or for Brett Keisel to be ready physically to be a starter.

That’s my working theory, anyway, because he would certainly be of better service to this unit as a rotational player rather than somebody who will be playing 50 snaps a game—and I say this realizing that Keisel actually played a few more snaps than Thomas last week against the Baltimore Ravens.

The following sequence of three plays toward the end of the first quarter on the Ravens’ opening drive pretty much sums up Thomas’ game all at nose tackle: one step forward, two steps back. 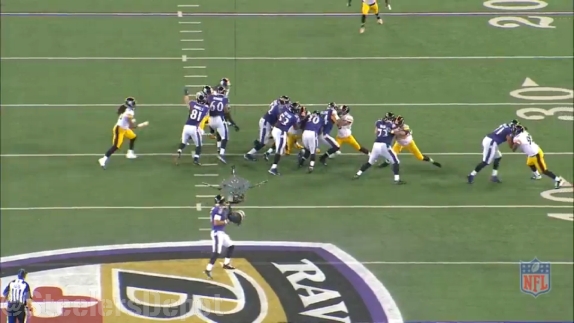 With the Ravens having crossed midfield, the Steelers moved on from their nickel and inserted Thomas at nose. On first down, Joe Flacco checked down to his running back for seven yards, on which play Thomas got downfield to chip in on the tackle.

On the following play, he up on center Jeremy Zuttah, eventually getting under his inside shoulder and sticking his frame out into the A Gap, where he managed to snag Bernard Pierce in the hole after two yards. He was rightly enthusiastic about the play after the fact.

I was less enthusiastic, however, about his efforts on third and one. Zuttah quickly made him persona non grata, getting his arms in tight and turning Thomas, driving him off the ball with minimal assistance from the left guard. This is an awful play for a nose tackle. Amazingly, the short-yardage stand held firm without one.

One time might be a fluke, sure. But the very same thing happened on fourth and one, only Zuttah turned him left this time instead of right. Flacco needed only follow his center for a stupidly easy conversion on a quarterback sneak.

Okay, I lied, that was probably more than just two steps backward. 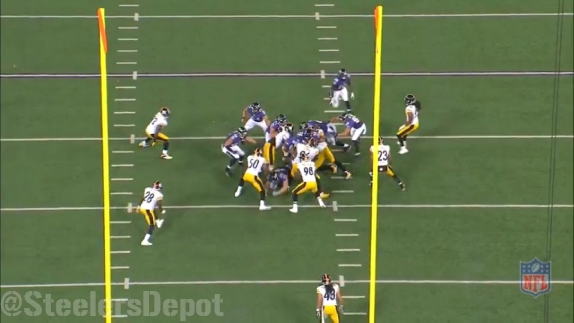 For bonus coverage, we’ll take another look at Thomas under the nose, this time from within the red zone on third and one, and on yet another quarterback sneak.

Once again, Zuttah had little problem driving Thomas off the ball, and all that was left for Flacco to do was to advance forward. With nose tackle versus center play such as this, short-yardage skirmishes become merely academic. Just compare these clips against those of McLendon.