Perhaps in response to that poor showing, the Steelers broke out a new look on Thursday against the Baltimore Ravens in goal to go scenarios.

As the Ravens got ever closer to the goal line, the Steelers took every defensive back aside from Troy Polamalu off the field and added some bulk up front, adding an extra defensive linemen and two linebackers for an unusual 4-6-1 look. 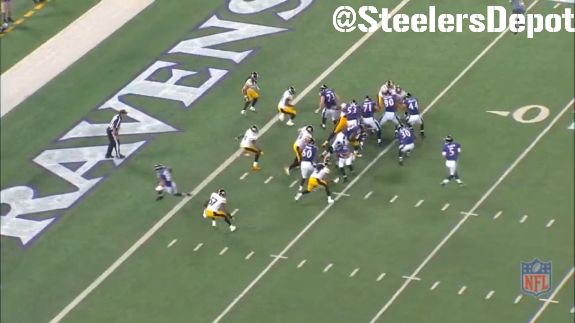 It was a look that proved to be effective—against the run. Joe Flacco, for some reason, only threw against the bulky front twice, but both finished in the end zone. The first such instance resulted in a wide open touchdown pass to Owen Daniels when Terence Garvin failed to follow him.

That was just a play after the Steelers played well against the run in their base package, with Jarvis Jones showing nice backside pursuit to bring the ball carrier down after a gain of one. After beefing up on second down, the Ravens attacked the defense through the air, and the result was a touchdown. That was the only time the Steelers ran that look in the first half.

In the third quarter, after committing two unnecessary roughness penalties in the span of three plays, the Ravens were granted first and goal on the one-yard line.

This called for another look at the 4-6-1 look, moving Cam Thomas inside and playing Brett Keisel and Cameron Heyward on the ends, while adding Garvin and Vince Williams at linebacker. The Ravens just had nowhere to run. 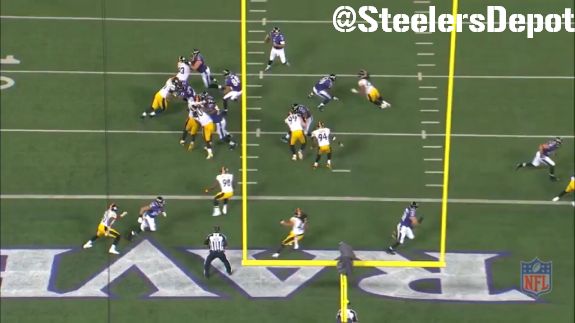 Unfortunately, the defense once again lost Daniels in coverage, this time with the lone defensive back in the field seeming to be the guilty party. Flacco was 2 for 2 for three yards and two touchdowns throwing against the 4-6-1 look.

After a two-yard gain to the three-yard line, the Steelers broke out the 4-6 front again in the fourth quarter for second and goal. With the line playing its gaps sound and Thomas getting loose, Lawrence Timmons was able to close in on the tackle for a loss of one.

You’ll notice in this instance that this came after Steve McLendon exited the game. the Steelers moved Heyward inside and replaced him on the end with rookie Stephon Tuitt, as seen in this later example in the fourth quarter. 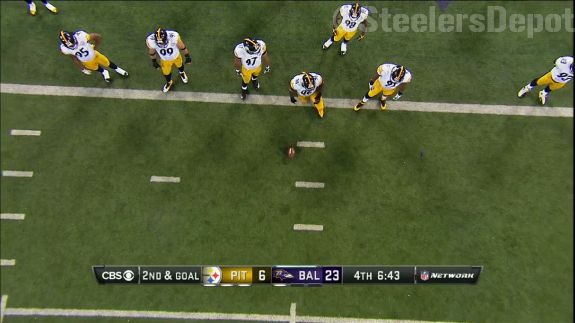 After a long 41-yard run that set up first and goal from the one, the Steelers went back to the 4-6 front, which, as you can see, included the aforementioned personnel. The defense was able to hold after four rushing attempts, including an end around and two quarterback sneaks, the second of which nullified a touchdown due to a false start.

The 4-6-1 package certainly presented an interesting look, and proved to be effective against the run. The errors that came about in the passing game were clearly of a mental nature. It’s an unusual look that could take some practice to get right.