Through the first two games of the season, Pittsburgh Steelers h-back Will Johnson couldn’t get on the field, logging just three snaps. On Sunday night against the Carolina Panthers, he played about 10 times that.

And one of the first things he did was drop the ball. His first snap, however, came on an 11-yard carry by Le’Veon Bell. He served as a lead blocker on the pull left, but the blocks of Heath Miller and David DeCastro kind of left him with nothing to do, looking for somebody to hit.

He got back on the field a few plays later on first and 10, flanking slot right in a five-wide set as a third tight end with two receivers. It was a designed screen to Johnson, with the center and guard leading the way. The only problem is that he didn’t come up with the ball.

Johnson remained on the field for the next snap, switching to the backfield and serving as LeGarrette Blount’s fullback lead. Miller motioned from right end to left, blocking off the edge as Johnson led through the hole and smacked linebacker A.J. Klein.

The only problem is that Blount hesitated, and by the time he hit the hole, the linebacker had spun off the block and was there to make the tackle after a short gain. 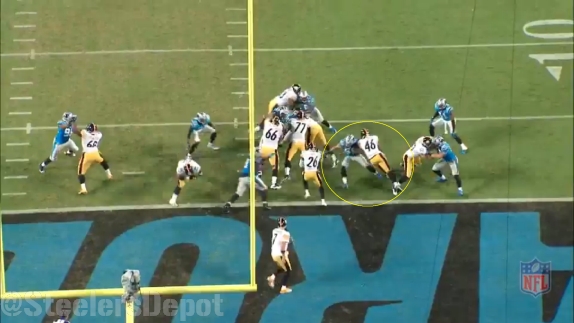 Five minutes into the fourth quarter, the Panthers were able to pin the Steelers’ offense down at their own two-yard line. They broke out the run look with Johnson and two tight ends, not fooling around so close to their own goal line. Johnson hovered behind right tackle at the snap but he failed to pick up Luke Kuechly through the hole, who tackled Bell after a short gain.

He didn’t miss the linebacker on Blount’s seven-yard touchdown run, however. Lined up with a hand on the ground flanked right in the backfield, Johnson pulled left at the snap and cut Klein down at the knees. Blount went untouched to the four-yard line, where he finished the job himself with some hard running.

The Steelers relied on Johnson heavily to close out the game, with four handoffs to Blount that went for a total of 42 yards. After a 17-yard gain, Johnson once again pulled left and drove Klein out of the hole for a short gain.

The next play was no different, latching on to Klein and allowing Blount to cut up inside. Although Johnson was blocking on the perimeter for his two long runs on that final drive, he actually showed well as a lead blocker. He missed Kuechly at the goal line, but in all, he had a good game against a good group of linebackers.