For yet another game, nose tackle Steve McLendon was among the better defenders on the field for the Pittsburgh Steelers defense. Because the team played so much of the second half with a big lead, however, he saw his playing time decline as the game wore on and they relied more on the nickel.

After Ike Taylor was injured, Antwon Blake came in during sub-packages at the outside cornerback spot. He ended up playing 17 snaps during the game, showing just how little they used a nose tackle down the stretch.

There’s also the fact that the second-year starter was nursing a shoulder injury that he sustained in the previous game, and it’s for this reason, I believe, that the Steelers have been using Cam Thomas more at nose tackle, even as early as the Carolina Panthers’ first drive.

Nevertheless, when he did play, he generally played well, and he did so going against Ryan Kalil, one of the better centers in the game.

On the Panthers’ first play of the game, lined up on Kalil’s left shoulder, McLendon jammed the center hard off the snap, knocking him off-balance and sending him to the ground.

Were it not for the left guard noticing this and coming in to clean it up by pushing him over the center on the ground, he might have gotten some pressure on Cam Newton. 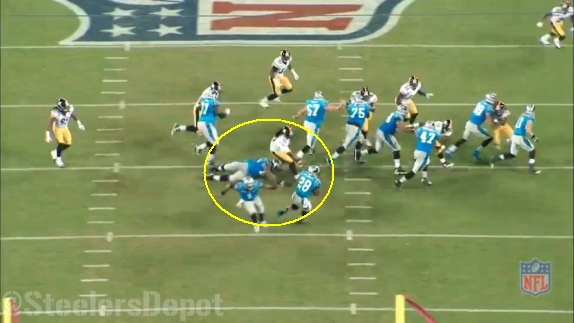 On the first play of the Panthers’ next drive, he gave us another example of the benefits of using a more athletic nose tackle. They’re simply more difficult to cut, which is what the left guard attempted to do on this play.

As can be seen above, however, McLendon managed to get his lower half out in front of him and flowed to the ball down the line, where he made the stop for a loss of one on the carry.

Late in the first half, once again on the first play of a drive, McLendon notched his first sack as a starting nose tackle when he got to Newton right through Kalil for a loss of seven on the play.

As can be seen in the display above, he was able to get under the center before swimming over the top to get into the backfield. He closed in on Newton so quickly that he had nowhere to go.

Not every play was perfect, of course. On the Panthers’ first play of the second half, for example, he tried to penetrate inside on a run up the middle, which allowed Jonathan Stewart to cut up around the other side. Missed tackles on behalf of other Steelers who shall remain nameless exacerbated the issue, but you get the point.