Third-year Pittsburgh Steelers inside linebacker Sean Spence makes his first career start this afternoon after overcoming what essentially turned into a two-year rehabilitation process, rehabbing the torn ligaments in his knee and hoping that the peroneal nerve behind his knee cap regenerated sufficiently enough to allow him to resume his career.

There was great hope for the slight but smart and quick hitter after he was drafted in the third round in 2012, but that hope quickly turned into doubts that he would ever see the field in a regular season game.

Questions lingered even up until he finally played his first preseason game, when he finally provided answers for everybody, including himself. But he didn’t stop there; in fact, he hasn’t slowed down all year, and now he’s been accelerated into the starting lineup at least until rookie Ryan Shazier returns from his own knee injury.

The Steelers’ 2014 first-rounder got his knee banged into in a friendly fire incident midway through Pittsburgh’s Sunday night victory over the Carolina Panthers, and Spence filled in the rest of the way, logging 35 snaps in the process.

On just his third play into the game, the Steelers rushed him on a blitz, and when Cam Newton took off running, he was the one who was able to bail out on his rush to scramble back and drag him down by the foot after a five-yard gain, limiting the damage. 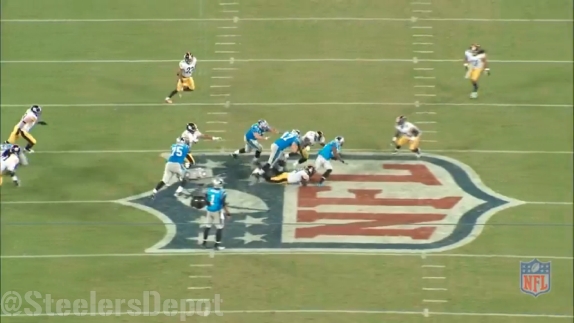 A few minutes later, after the Steelers managed to convert a turnover into a touchdown, the Panthers ran at him with Mike Tolbert, a sizable running back that could be a tough match for an undersized inside linebacker. Spence stayed out in front of him, and as Tolbert tried to spin away, the linebacker caught him by the legs to take him down after a one-yard gain.

It was Spence versus Tolbert again two plays later, with the linebacker coming out on top for the second straight time. He managed to navigate through the left side of the offensive line, getting around the center to meet Tolbert in the A Gap and bring him down after another gain of just one yard.

It’s often difficult to tell exactly what happens in coverage, especially when a play breaks down, when a defense is employing a zone. That certainly seems to be the case here. As Newton scrambled out of the pocket, Troy Polamalu chased down the receiver at the top of the play.

That in turn released Kelvin Benjamin to occupy the zone that Polamalu just left. As a result, Spence was stuck in a trail position, and Newton needed only to float the ball over the coverage for a big play of 18 yards.

And Tolbert did get his revenge late in the game. On a second and one midway through the fourth, Newton dumped it off to his big back, using a blocker to help evade Spence’s tackle attempt, which allowed the first down and five more yards.