I’m sure Marcus Gilbert would be the first person to tell you that he had a rough go of it during the Pittsburgh Steelers’ first two games of the season, surrendering four sacks on his own and allowing Ben Roethlisberger to be tagged down on a fifth sack after fumbling a snap.

During his press conference following the Week Two loss, Mike Tomlin told reporters that he expected Gilbert to come back fighting like Rocky, and I suppose you could argue that he did just that on Sunday night against the Carolina Panthers, battling David DeCastro as the best lineman for the Steelers that night.

While his play was solid throughout the night, some moments happened to stick out more than others for me. Late in the first quarter, for example, with the Steelers kicking off their third drive after punting the first two times, they looked to jumpstart things by going deep on the first play.

The problem is that Charles Johnson jumped offside, but Gilbert had the wherewithal to pick him up and block him, knowing that there would be an opportunity for a free play if he could hold the rusher away from the quarterback. He did give Ben Roethlisberger the time to throw, and it netted a 42-yard pass interference penalty, rather than a five-yard offside call.

Late in the second quarter, with the Steelers racing against the clock to put up some points before halftime, Pittsburgh started deep in its own end. The line gave Roethlisberger some good pass protection throughout this drive, as exemplified here with Gilbert absorbing a bull rush from Johnson to give his quarterback the time to find Antonio Brown down the field for 15 yards. It’s hard to look good taking a bull rush, but he anchored well at the end and kept the pocket clean. 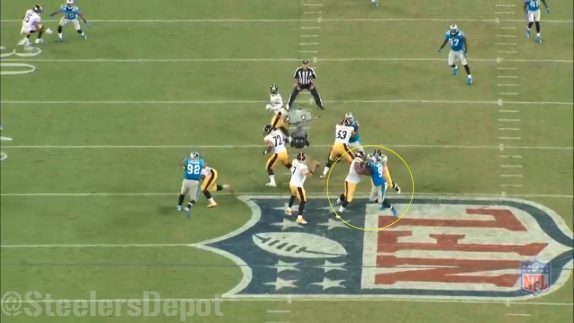 Here is another example of Gilbert managing to anchor after a bull rush from later on in the same drive. Notice the base and positioning. While not textbook, it shows improvement from even the week before last. It once again gave Roethlisberger time to find Le’Veon Bell for 12 yards to get into field goal range.

It’s certainly always a pleasure to see your offensive line blocking well on a touchdown pass as well, and Gilbert did a nice on both of Roethlisberger’s touchdown throws.

Even though Kony Ealy technically managed to take the quarterback down at the end of this play, it was, by a very rough estimate, about five seconds after the snap, following a deadly pump fake, and with the quarterback unexpectedly scrambling around the edge.

Although much of his work came in pass protection (believe it or not, the Steelers are finally an ambidextrous running team), Gilbert did some good work in the running game as well.

One block in particular during the team’s second drive of the third quarter stood out, during which Ealy set up as a seven-tech, and Gilbert reached his outside shoulder to turn him in, allowing LeGarrette Blount to get around the edge, albeit for a short gain.

The right tackle capped off the drive working against Wes Horton on the pass rush, dropping and hooking late to work him around the pocket, where he was stuck. Roethlisberger spotted Brown crossing the middle of the field and scrambled to meet him, hooking up for the score. 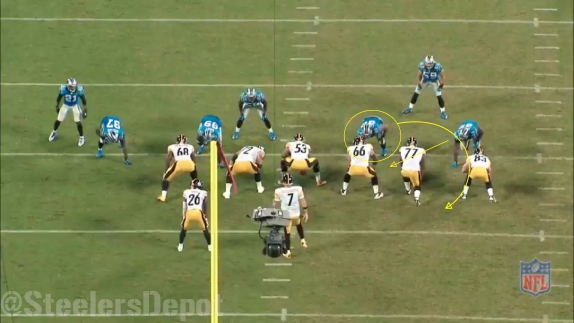 This is a play that I also highlighted yesterday for DeCastro, but it’s equally noteworthy for Gilbert as well, as the two worked in tandem for seamless pass protection going against a tackle-end stunt. 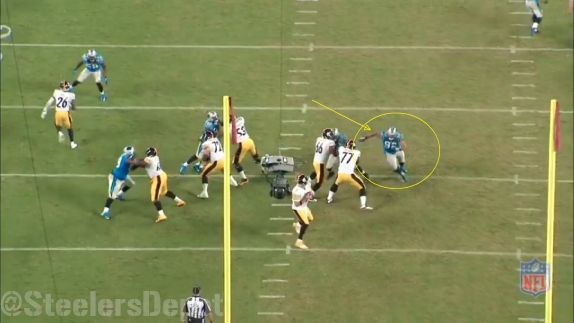 With the end crashing inside, DeCastro diagnosed the stunt as the tackle dropped back and immediately switched over. It happened so quickly that Gilbert was able to double-team the end until the tackle finally got a chance to loop around.