Sack breakdown of the lone one allowed by the Pittsburgh Steelers in their Week Three victory over the Carolina Panthers.

Panthers are playing passively on defense. Two high shell with both safeties deep. MIKE linebacker Luke Kuechly gains a lot of depth, too, taking away both of the Steelers’ routes downfield. 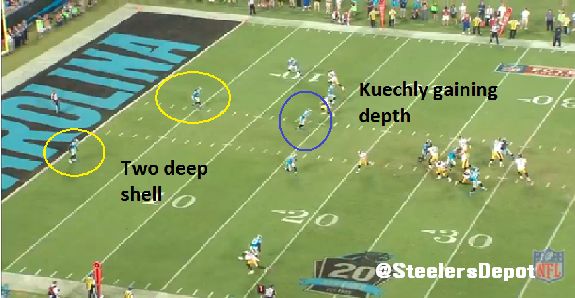 On the line, bit of bad luck. Defensive end Mario Addison hits Kelvin Beachum square in the facemask on his first punch, knocking the left tackle off balance. Addison beats him around the edge with a speed rush, dipping that inside shoulder. 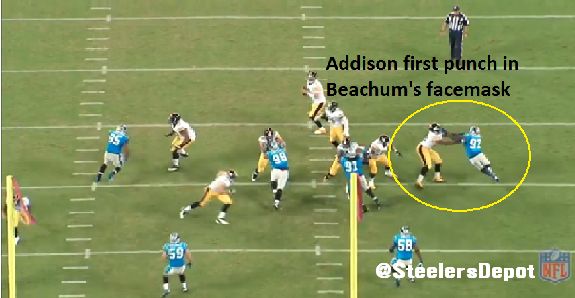 Other element here lies with Marcus Gilbert and David DeCastro. Both facing bull rushes, the pair of lineman get walked into the pocket. Not terribly and not atypical of how a lineman looks facing a bull rush; it’s never pretty.

When a quarterback is under pressure, he looks for three escape outlets. Climb the pocket, flush left, or flush right. With Beachum beat, Ben can’t flush right. And with Gilbert and DeCastro walked back, Ben can’t roll right or step up. He’s trapped, nowhere for him to go. Down he goes, Addison crunching him. 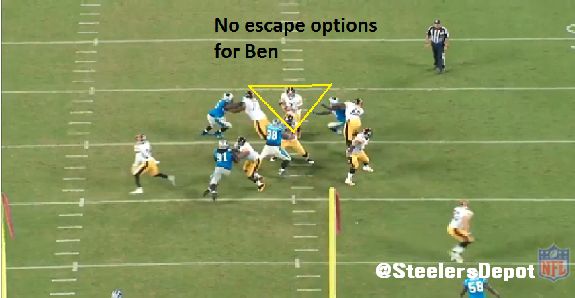 While I realize what Addison did to Beachum is technically a penalty, I still have to put the blame on him. What happened to DeCastro and Gilbert isn’t even to warrant giving either them a sack. Sometimes that’s life for a lineman. And why I even admit the sack counters aren’t always a reliable statistic.

Again, counting penalties that were declined.