A breakdown of the sacks allowed by the Pittsburgh Steelers from the first two weeks of the season. With the team playing on Thursday night last week, there wasn’t time to get to the Cleveland Browns breakdown so we’ll combine the two. Look for the sack and penalty counter at the end.

1. 3rd and 14, 10:40 1st. Empty set. Steelers keeping five to block versus a three man rush. Browns drop eight. The Steelers only have two routes that run to the sticks, the rest consisting of underneath crossers.

Seeing that, Ben Roethlisberger should get the ball out to one of those underneath receivers and see if they can make a play. Odds are slim of being able to make a throw to the sticks. Having said that, half the blame should go to Roethlisberger. 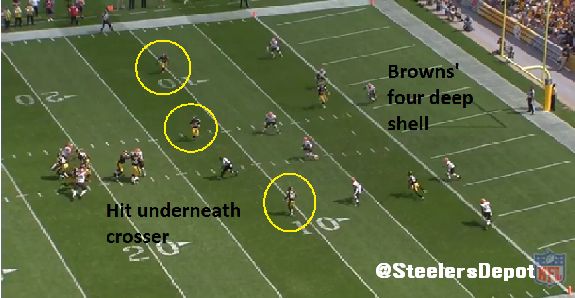 Along the line, Marcus Gilbert does get bull rushed by Paul Kruger. Nothing mystical about this one. Just gets walked back although you could argue Gilbert was a tad upright.

Another element to look at is Gilbert’s feet when Kruger makes contact. Appears he’s stepping and that both feet are off the ground, leaving him unable to anchor against the bull. Makes him vulnerable to walk back. Plus, it’s a quality bull rush by Kruger. Low man with arm extension. 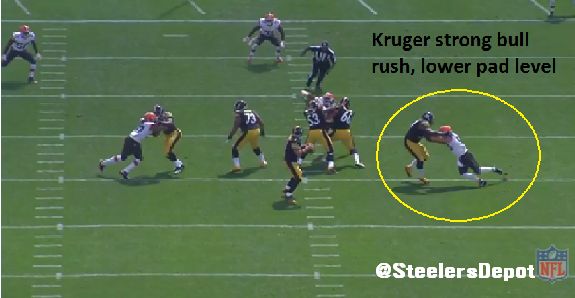 Blame: Half of Roethlisberger, half on Gilbert

2. 2nd and 6, 6:16 3rd. 11 personnel out of the gun. Blocking with six, including the back on a block/release against a four man rush. Three defenders from the left that creates one-on-one matchups.

Three man route with it initially covered well. All routes are vertical however, meaning it takes extra time for them to open up. 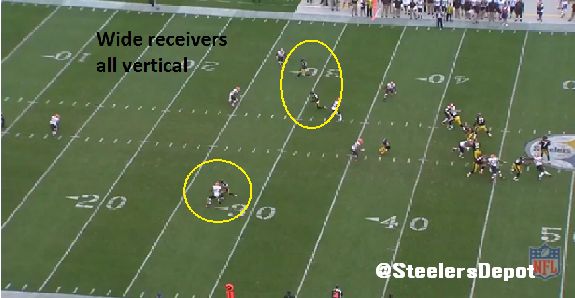 Kelvin Beachum gets beat around the edge by Paul Kruger. Pretty simple here – simple speed rush. Beachum just not quick enough laterally here. The pressure forces Roethlisberger to climb the pocket and attempt to move to his left. 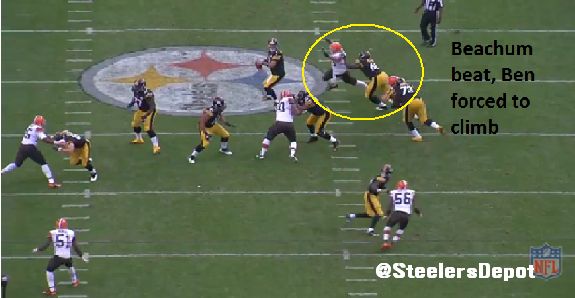 But Kruger doesn’t get the sack. Rookie linebacker Christian Kirksey does. The Browns send him on a blitz while also asking Billy Winn (#90) to slightly slant to the outside in order to occupy Ramon Foster. 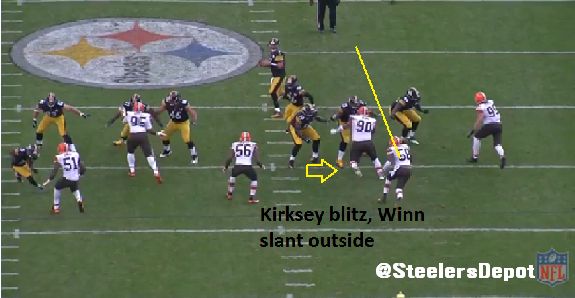 Foster recognizes the blitz late and doesn’t adhere to his “feet before hands” principle when working to the midpoint of a defender. On contact with his punch, his left foot is off the ground. Like Gilbert above, it hinders his ability to generate power on his punch. 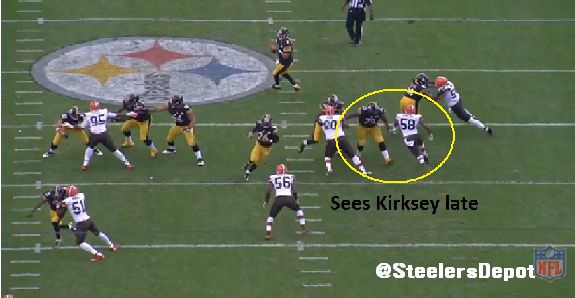 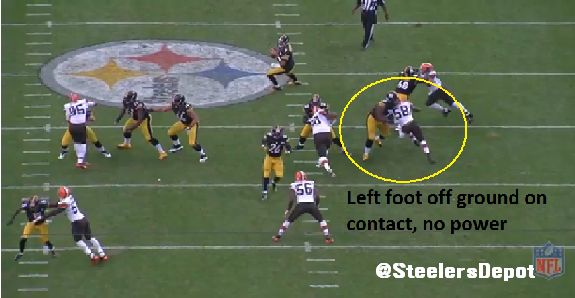 Kirksey is able to blow right through it, dipping under Foster and bringing #7 down. 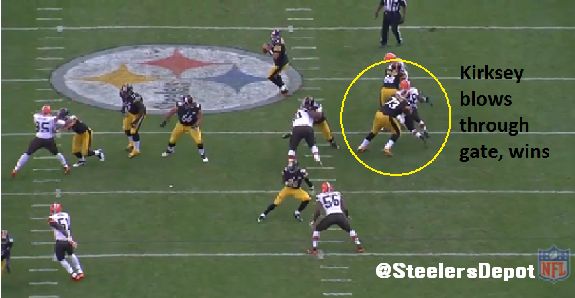 Blame: Half on Beachum for allowing initial pressure, half on Foster for giving up the actual sack.

3. 3rd and 10, 14:41 4th. 10 personnel, shotgun. Five block versus another three man rush. Marcus Gilbert bull rushed by Jabaal Sheard right into Ben’s lap. No kickslide here from Gilbert with Sheard playing a relatively inside tech for an edge rusher.

One issue I do see is with Gilbert’s weight distribution. His weight seems to be on his heels. In this picture below, you can see his toes off the ground with the weight falling to his heels. 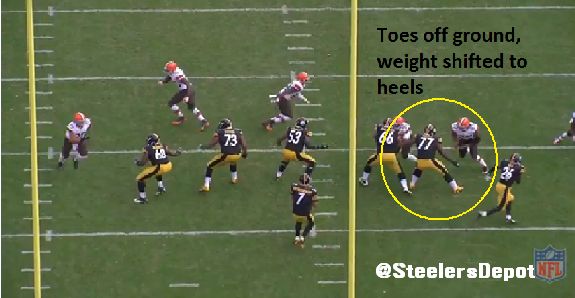 Upon contact against this bull, he isn’t able to absorb it well and gets knocked back. He trips over David DeCastro’s leg while getting walked back. Falls down and the sack occurs. 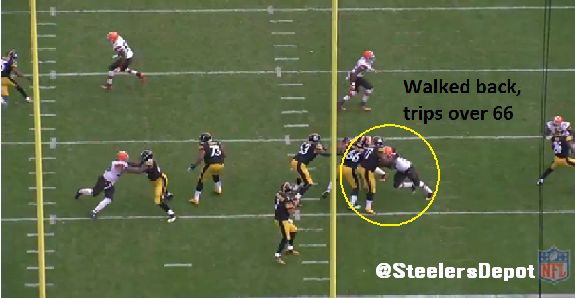 1. 1st and 10, :59 2nd. 11, shotgun. Six block versus five rush. Safety blitz and Roethlisberger attempts to look to the other side, the strong side of the play. Three defenders in coverage for Baltimore with two receivers stemming vertical. 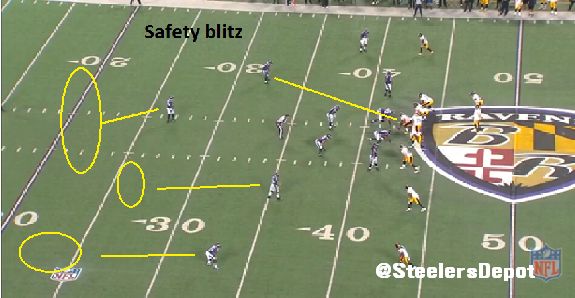 With the cushion being offered, the Steelers’ receivers need to break their routes off. It’s 1st and 10 with plenty of time left before the half closed. You’re not going to swap hips with the DBs so break down and make yourself available on a curl. 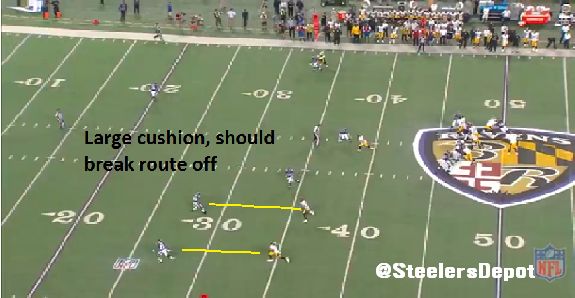 Along the line, we get some flatback from Marcus Gilbert. 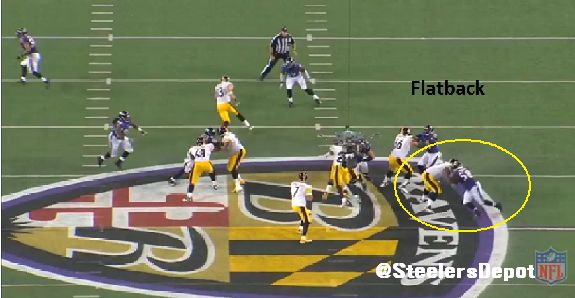 Blame: Half on the receivers, half on Gilbert.

2. 2nd and 5, 11:59 3rd. 11, shotgun.  Five plus a block/release with a four man rush. Gilbert’s ugliest play, the reverse pancaking courtesy of Elvis Dumervil. We’ll start with him.

I’ve touched on it on episodes of this week’s The Terrible Podcast but Gilbert’s issue is being late with shooting his hands. Only a fraction of a second late in doing so but that’s all it takes. Dumervil easily gets into Gilbert’s pads first and is able to take control. 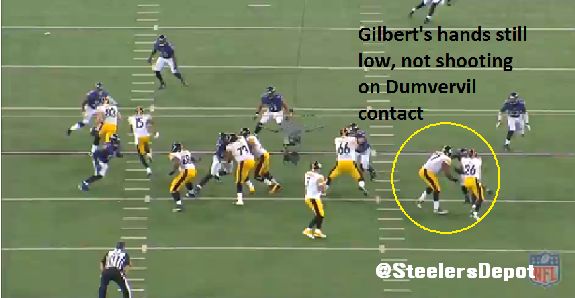 It seems the tackles do have a tendency to keep their arms low on their kickslide – check out Beachum opposite – but he needs to shoot them quicker.

One other element of the play is worth mentioning. Roethlisberger’s first read is to Antonio Brown. Brown releases with an outside stem but the corner pushes Brown to the sideline and out of bounds. Completely takes him out of the play. 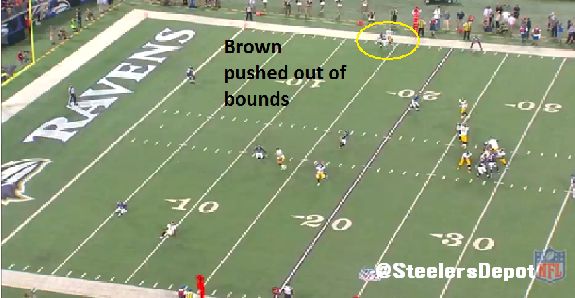 I will still put all the blame on Gilbert because of how ugly this was but Brown didn’t exactly help the cause, either.

Clarification: I include penalties that are declined, too.