Another bubble player – and arguably the biggest surprise – to make the Pittsburgh Steelers’ opening 53 man roster was guard Chris Hubbard. We’ll evaluate his performance from Thursday night’s preseason finale against the Carolina Panthers.

1. 1st and 10, 1:54 2nd. Shows proper hand placement along with the ability to mirror in pass protection. The defensive tackle knocks the pass down but there’s nothing Hubbard can do about that. In fact, Hubbard stones the tackle so well that it allows the defender to read the quarterback and make a play on the ball instead of attempting to rush.

2. 2nd and 3, 14:20 3rd. Inside zone run by the Steelers. Excellent job by Hubbard to reach block the one tech. Not an easy task for any lineman to do. Covers a lot of ground with only the help of a slight chip from the center.

The assignment for Hubbard is to cross the one tech’s face, set his hips, engage, and seal. And he does a beautiful job of doing so. 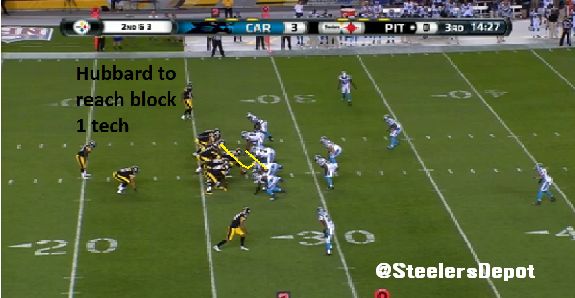 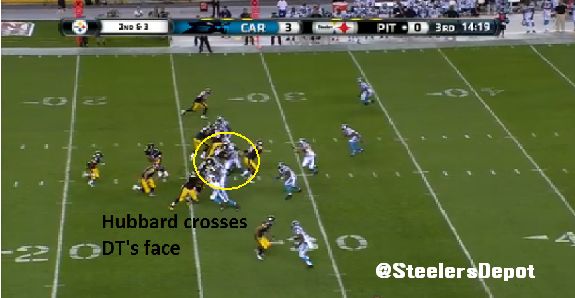 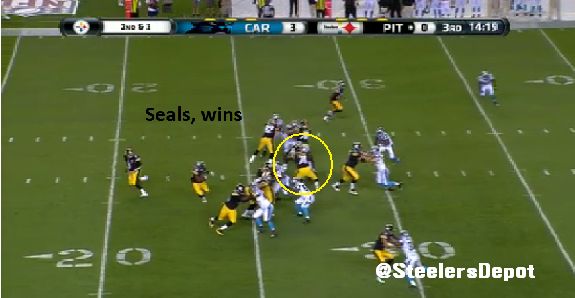 Against that front, some teams will change their blocking schemes (center down blocks the one tech, guard pulls off his outside hip).

GIF of it below just to really hammer home the point of how much ground he was able to cover. 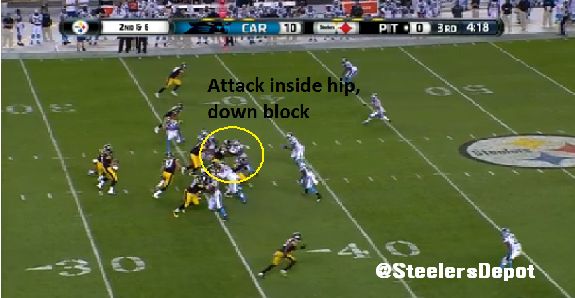 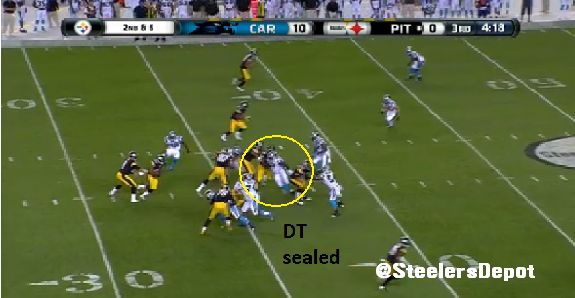 4. 3rd and 2, 3:42 3rd. Team asking him to immediately work to the second level. Although Hubbard falls off his blocker quicker than you like, he holds on long enough to spring Houston for a nice gainer. 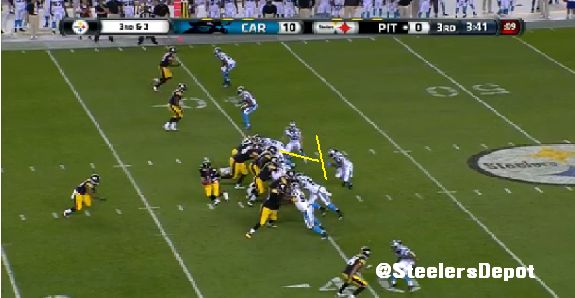 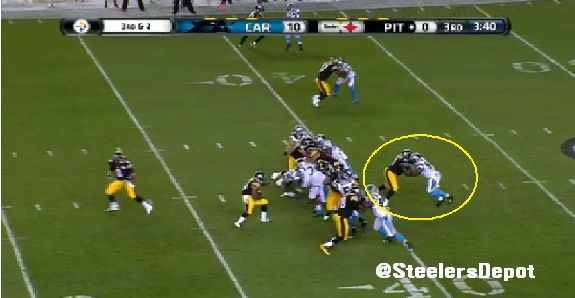 1. 1st and 10, 8:45 2nd. His first snap of the game sans the 4th and 2 play where he entered as the tight end eligible. Noted this one in my game breakdown. Zone run. Hubbard lets the three tech cross his face and win inside. 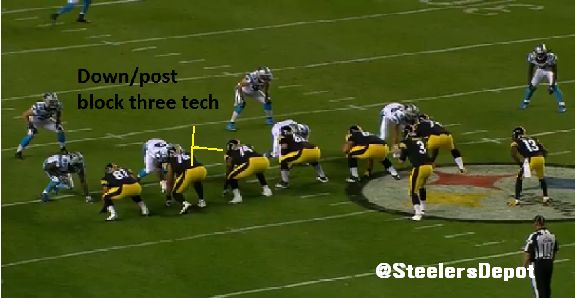 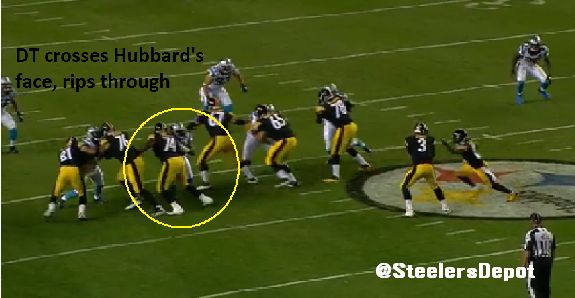 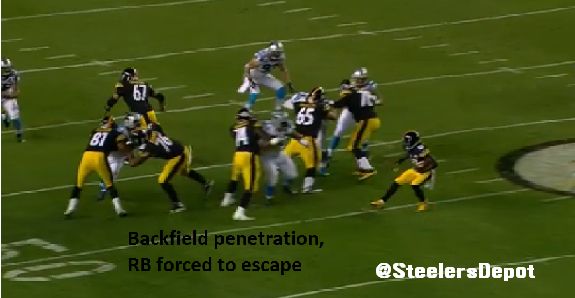 Can’t let that happen. Key in on the inside hip/eye (depending on how it is coached) and drive the tackle down the line. Get him moving on the tracks. Don’t put him in control and get backfield penetration. 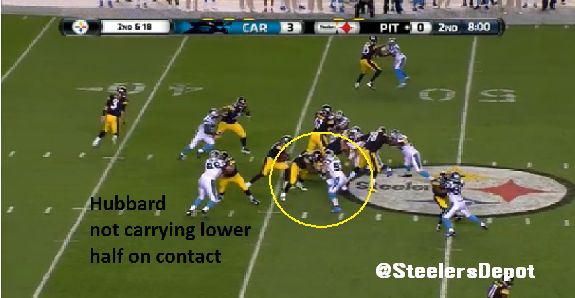 Blackburn sheds with ease and winds up making the tackle. 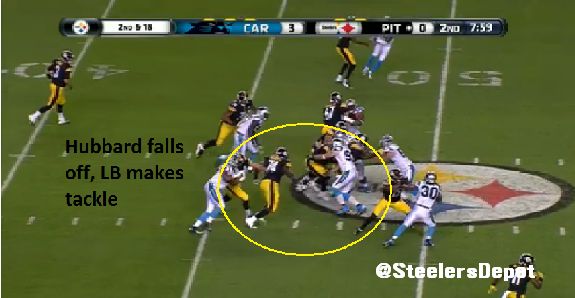 3. 2nd and 18, :35, 2nd. Pass protection versus an overload blitz to his side. Incorrectly doubles the three tech with the center and a blitzer ends up rushing free through his gap. 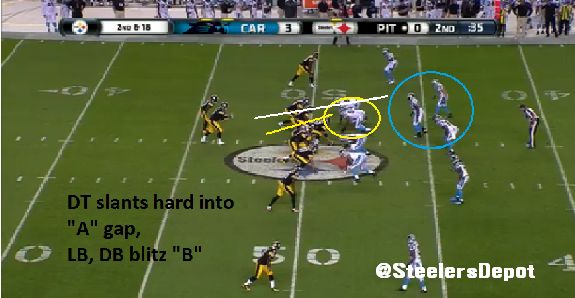 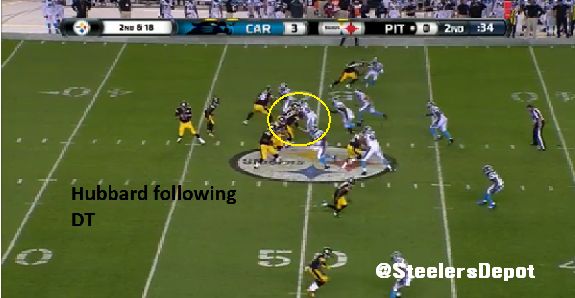 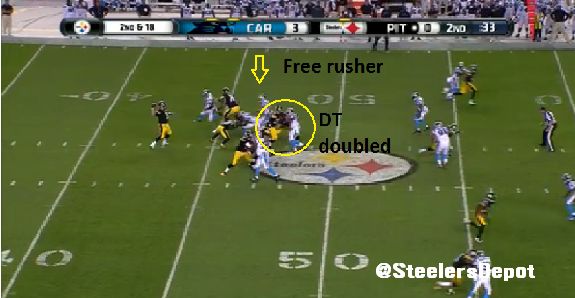 As soon as he Hubbard sees that three tech crashing hard into the weakside “A” gab, he needs to pass him off to the center and pick up the blitz.

Had he done that, he could have gotten the linebacker and let Dri Archer handle the defensive back, a more favorable matchup for a 170 pound rookie.

4. 2nd and 9, 10:34 3rd. Hubbard shows a weak punch, attempting to slap the hands down of the defensive lineman. Does manage to seal but again, a terrible looking punch.

5. 3rd and 9, 10:28 3rd. Same issue as the third play which makes it all the more frustrating. Panthers blitz and Hubbard fails to process and adjust, doubling the defensive tackle. 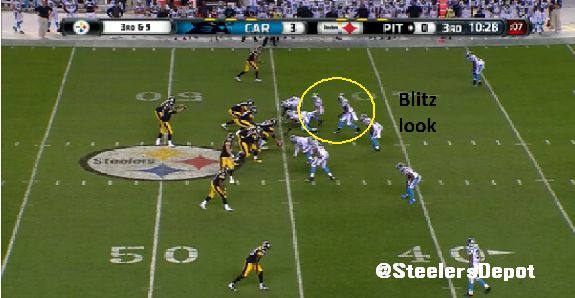 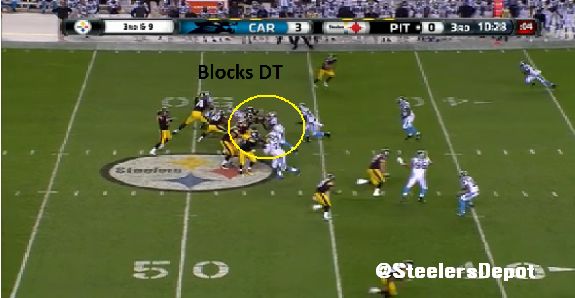 1. 2nd and 9, 8:10 2nd. New one but it’s appropriate. Initially, he does a nice job of sticking vs the hand fighting defensive tackle while moving laterally.

But he winds up severely losing his base. So much so that his right leg kicks up into the air.

He somehow recovers, resets his base, and finishes the play positively. It’s a net win but there’s enough ugly here that it can’t solely be put in the “Good” category.

Color me as one of the many that was shocked to see Hubbard make the cut. I still don’t completely understand the move but it’s also fair to admit I probably wrote Hubbard off too quickly after a poor first game.

Hubbard does understand hand placement and will flash the athleticism he still has despite appearing to add on extra weight. Hubbard is now listed at 286 but it’s fair to think he’s close to 300 pounds.

The main negative I see with Hubbard is him being too slow to read and react. Too many mental mistakes. Throughout the preseason, there have been moments where he’s looked lost.

Hubbard may not get through the entire season on the Steelers’ roster. When he is, expect him to be inactive on game day.