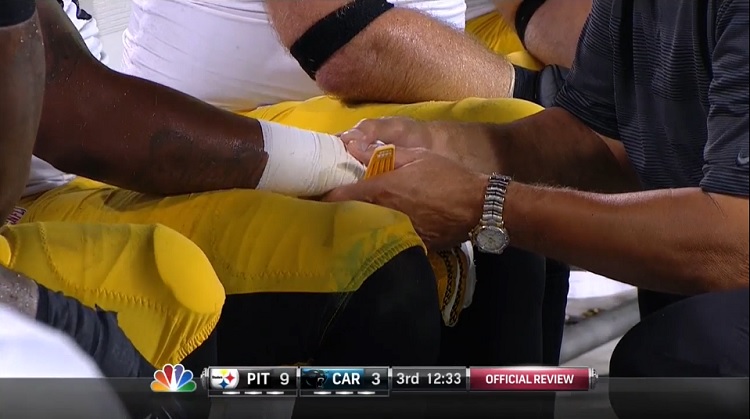 The news doesn’t look to be good for Pittsburgh Steelers outside linebacker Jarvis Jones as Adam Schefter of ESPN is reporting Monday morning that he likely needs wrist surgery as a result of the injury that he suffered Sunday night in the win over the Carolina Panthers.

Jones, who injured himself during the third quarter sack of Panthers quarterback Cam Newton, was replaced in the lineup by Arthur Moats. His injury, depending on the severity of it, could very well sideline him for the season. The Steelers could place him on the designated to return injured reserve list, however, if they think he has a good chance of returning later in the season.

Schefter is also reporting that rookie linebacker Ryan Shazier suffered a sprained MCL in his right knee Sunday night and that he’ll undergo an MRI later on today.

Shazier is likely to miss some time with the injury and would be replaced in the starting lineup by third-year linebacker Sean Spence.

As mentioned earlier Monday morning, you can expect the Steelers to make a few roster moves this week. With cornerback Ike Taylor also expected to be sidelined for a considerable amount of time, and perhaps the rest of the season with a broken forearm, the team will likely choose to fill his spot on the 53 man roster with another outside linebacker. They could choose to promote rookie undrafted free agent Howard Jones from the practice squad or bring back Vic So’oto, who was with the team up until the final preseason game.