Injured in the final preseason game with a report AC (acromioclavicular) sprain, the Pittsburgh Steelers fourth round draft pick, wide receiver Martavis Bryant, has finally returned to practice. With a short week, it isn’t clear if he will play against the Baltimore Ravens on Thursday Night Football.  Quite frankly, he probably shouldn’t.  Another week on the inactive list would be a much smarter option for the team and the player.

As always, the Steelers have been tight lipped about the details of the rookie’s injury.  An AC sprain, commonly referred to as a separated shoulder, is often seen in contact sports.  A football tackle, where the player lands on his shoulder, is the typical mechanism.  It can also occur from falling on an outstretched arm. 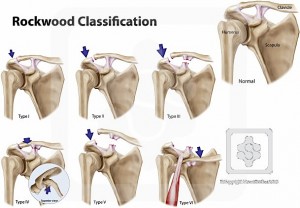 Although the Steelers never revealed the grade of Bryant’s injury, I now have to assume that it was either a type I — a simple sprain to the AC joint with minor damage to the ligament and no separation of bones  — or a type II, where only the AC ligament is torn, the other ligaments are intact, and there is widening of the joint.  Based on his ability to practice fully today, it’s more likely a type I.

The treatment for a type I or II injury includes a sling, ice, anti-inflammatories, and sometimes physiotherapy.  The pain usually improves quickly, but the ligament can take up to 6 weeks to heal completely.  In both cases, Bryant could progress to range of motion (ROM) and strength training once his pain decreased.  I’m again assuming that he sustained a type I sprain, which would allow him to return to full physical activity once he had nearly normal ROM and no tenderness over the joint.  In the case of a type II sprain, he would be out of action for 6 weeks and likely headed to IR with a possible return (if the team was willing to use their one exemption on the rookie).  More likely, he would have missed the rest of the season.

But what’s the danger if Bryant plays against the Ravens?  Any Steelers fan can tell you it’s always a brutally physical clash, as Ben Roethlisberger’s nose and Rashard Mendenhall’s scapula can attest.  And let’s not forget Le’Veon Bell’s concussion last year after a ferocious hit that knocked off his helmet and cost him a touchdown, since he can’t remember it.  If Bryant takes a hit to his shoulder, it can make the injury worse and sideline him longer.

With the trio of Antonio Brown, Marcus Wheaton, and Justin Brown providing the Steelers with capable targets for Roethlisberger, don’t expect Bryant to make his NFL debut this week.  A long week before the next game against the Carolina Panthers will give Bryant more time for recovery and practice.  And that’s just what the doctor ordered in my opinion.