The Pittsburgh Steelers defense came home from North Carolina having played their part in a dominant win over the Panthers, but it came at a terrible price.  3 starters went down within 7 snaps a mere 5 minutes into the second half (sounds like a math problem, but that will come later).  Ryan Shazier reportedly sustained an MCL sprain and will hopefully only miss a few weeks.  From there, the news got much worse.

OLB Jarvis Jones, who has been making great progress in his second season, came out of the game with a wrist injury sustained during a forced fumble.  A joyous event on first view, it was the first takeaway of the season for the Steelers defense.  It looked like Jones’s hand made contact with DE Brett Keisel‘s knee, as you can see in this screenshot (note Jarvis’s right hand, in a white glove, striking the Keisel’s left leg): 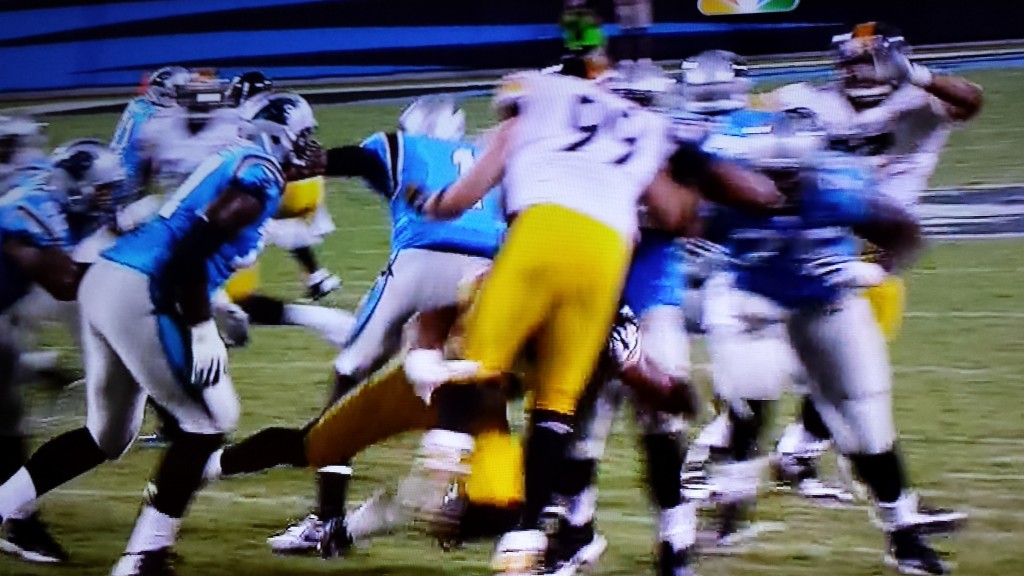 Although no specifics have been released regarding the injury, the team confirmed that Jones did undergo surgery today and has been placed on injured reserve with a designation to return (IR/DTR).  This gives Jones 8 weeks to recover before he can see playing time, although he can join the team to practice after 6 weeks.  While it isn’t clear if he sustained a fracture, ligament injuries, or both, the team must have made the decision based on xrays and operative findings.  With that, they were likely working on a favorable prognosis from his surgeon.

While his teammates will miss Jarvis during this time, it is good news that he is expected to return.  At the same time, it may be very bad news for veteran CB Ike Taylor.  Shortly after Jones left the field, Ike was also a victim of friendly fire.  While Taylor was making a tackle, ILB Lawrence Timmons flew in to help, accidentally striking Taylor’s right forearm with his helmet.  Taylor lay writhing in pain, pointing to his obviously deformed arm: 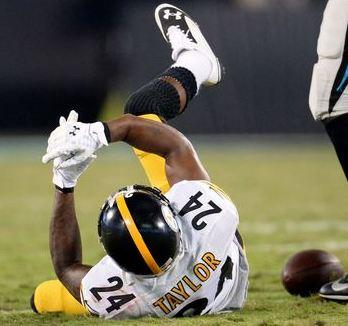 Trainers stabilized Ike’s arm in an air cast and walked him off to the locker room.   Hard as nails and always a true team player, he appeared in a short arm cast (one that covers the forearm but not the elbow or upper arm) to watch his team finish off the Panthers.

According to Jason La Canfora, Taylor also underwent surgery today.  Based on the appearance of his arm — which is definitely not supposed to bend at that angle midway between the wrist and the elbow, Taylor suffered a compound fracture, which means the force of the helmet hit broke both of the bones, the radius and ulna.  Here’s an example of different forearm fractures: 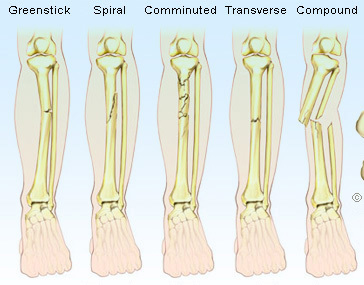 Taylor surely underwent an ORIF, or an open reduction and internal fixation.  In surgery, an incision is made to expose the broken bones; both bones would need to be put in the proper alignment, or reduced, and fixed in position with metal plates and screws.  It’s true, orthopaedic surgeons are carpenters with good tools and better lighting.  Ike is probably swagging a look like this tonight (just an example, not his actual xrays):

Plates and screws in place after ORIF (www.aaos.com)

With the plates holding the broken ends of the bones in place, the fractures should heal in about 6-8 weeks.  Since he wasn’t placed in a long arm cast, which goes from the wrist to the upper arm to immobilize the elbow, I’m guessing that the fractures did not result in bone displacement severe enough to impact the elbow joint.  This would make the surgery and the recovery less complicated.

One way to possibly speed up healing is treatment with a medication called Forteo, which helps to stimulate new bone formation.  The FDA has only approved the drug for patients with osteoporosis (significant loss of bone density) who are at increased risk for fractures…but it wouldn’t be the first time that a prescription drug was used for a different situation (Adderall, anyone?).  I’m obviously not treating Ike Taylor or suggesting that his doctors give him this medication.

For Taylor, time is of the essence.  Here’s where all that math comes into play.  The Steelers currently have 6 CBs on the depth chart, including Ike, whose $2.75 million salary (and cap hit) is guaranteed.  IR/DTR would have been the perfect solution, but Jarvis Jones — 1 of 4 OLBs on the roster — was awarded that chance to heal and return.

Taylor must now hope that Cortez Allen, William Gay, and Arthur Moats all stay healthy.  If they do, then the Steelers may be able to keep their beloved veteran defensive back on the 53-man roster as 1 of 7 inactives each week until he is ready to return…but the longer he takes to return, the higher the chance that the Steelers will need that roster spot (that’s how they lost a healthy backup QB Brian Hoyer to the Browns 2 seasons ago, when the O lineman couldn’t stay upright for more than 5 minutes at a time).  With Taylor’s willingness to play through pain, his obsessive dedication to maintaining his fitness, and his relationship with the coaching staff and the Rooneys, it might just work.  As we all know, his arm just has to heal well enough to make tackles.  It’s not like he’s going to catch a football.