A breakdown of the play of Pittsburgh Steelers left tackle Kelvin Beachum against the Philadelphia Eagles last Thursday night.

1. 3rd and 6, 11:51 1st. Beachum’s punch is too poor and too high, closer to the helmet of defensive end Brandon Graham. It looks like Graham is going to be able to slip past and hit the edge. But Beachum keeps moving laterally and shows the athleticism to recover the edge, doing just enough to prevent Graham from reaching Ben Roethlisberger. 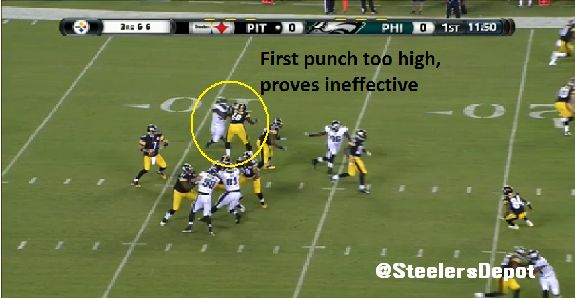 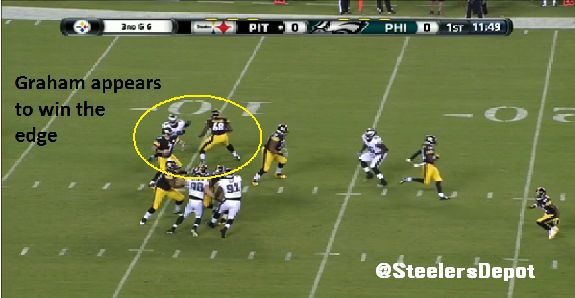 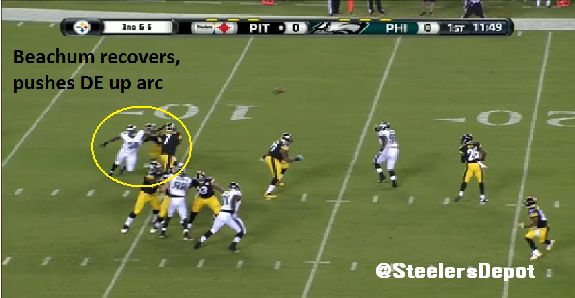 It’s not pretty but left tackles are going to face top competition, making getting beat inevitable. It’s imperative to have that recovery speed. And that’s what Beachum shows here.

2. 2nd and 10, 6:08 1st. Defensive tackle Fletcher Cox slants one gap over. Beachum picks him up and sticks all while showing a strong base. Knees bent, butt down. Keeps his feet moving and mirrors against Cox’s counter of an inside spin.

3. 3rd and 7, 9:00 2nd. Third down with the Steelers’ in field goal range. Critical situational football. Beachum is quick off the ball, taking the proper angle off his kickslide and is able to cover a lot of ground. Keeps his feet moving and sliding laterally on his punch, getting into the shoulder of Trent Cole as he rides him up the edge. 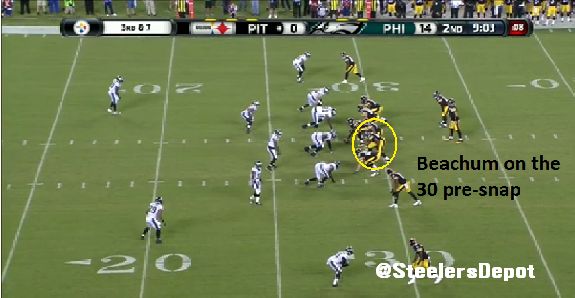 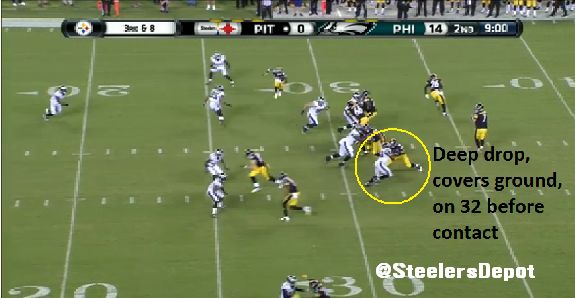 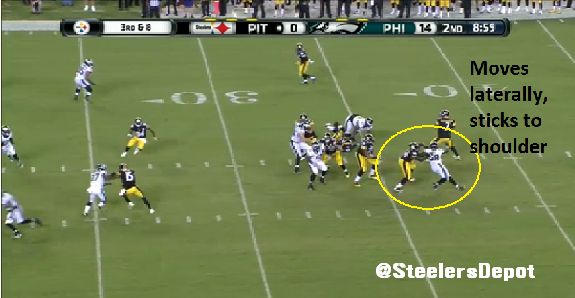 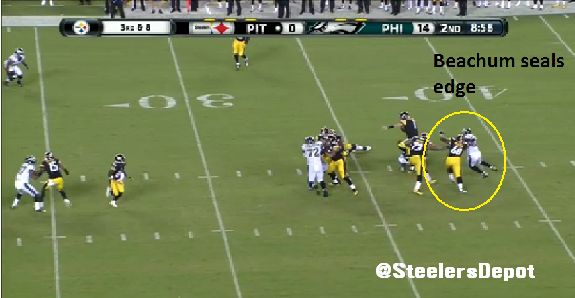 4. 1st and 10, 4:54 3rd. The lone run in this category. Nice reach block to seal the defensive end on this zone run. Lets LeGarrette Blount cut back and pick up four. 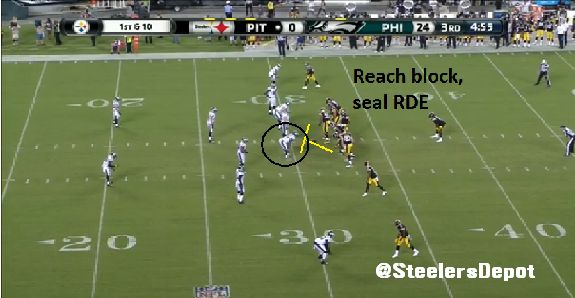 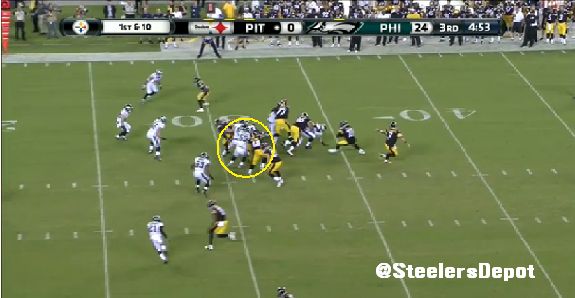 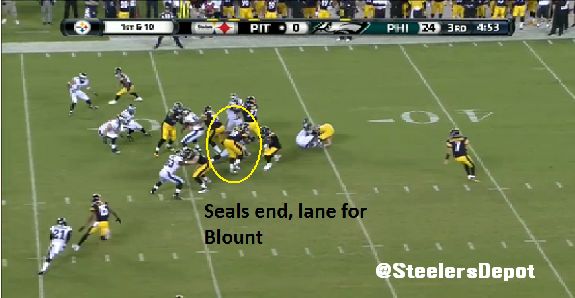 1. 2nd and 5, 9:39 1st. Right defensive tackle Brandon Bair gets into the pads of Beachum, walking him back initially. Then bench presses him, knocks the left tackle off his base, Bechum’s left leg flying up into the air, and the defender gets into the face of Ben Roethlisberger. His hurried throw doinks off the helmet of an Eagles’ lineman and the pass falls incomplete. 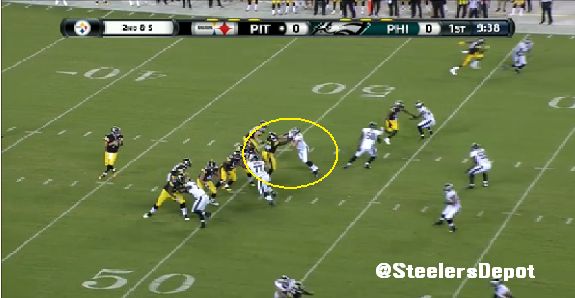 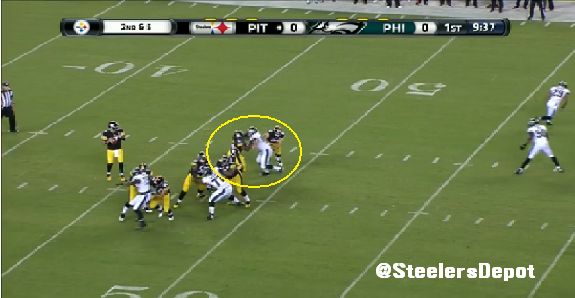 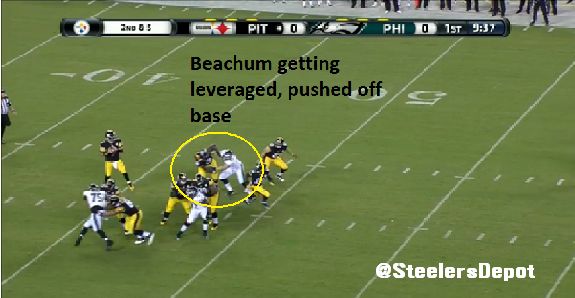 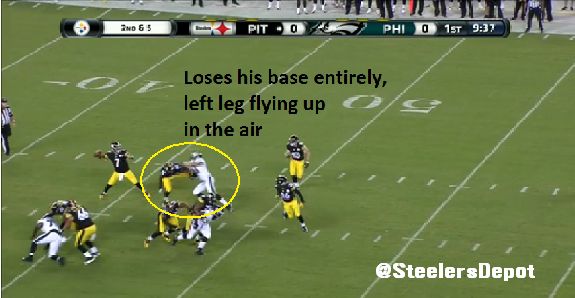 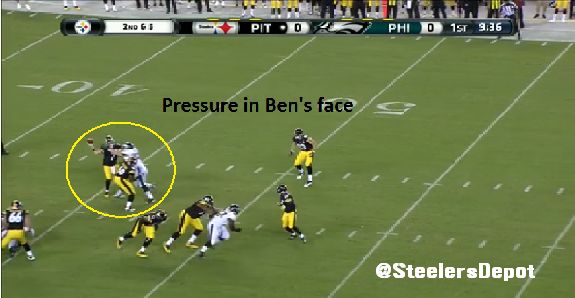 2. 2nd and 6, 11:52 2nd. Poor first punch and Beachum’s feet go dead on contact. Cole is able to dip the edge. There would’ve been pressure had the pass not come out quick on a two way screen that ultimately finds the hands of Dri Archer.

3. 1st and 10, 10:31 2nd. Trent Cole swims to the inside of Beachum. On the surface, it isn’t an issue. The Eagles are rushing just four so Beachum passing the end off to the guard for inside help is the right move.

But on the swim, Beachum seems to lose his balance and his weight transfers to his heels. He loses his balances and can’t immediately recover. As Roethlisberger is flushed to his left, Cole spins that way and Beachum isn’t able to stop him. Cole ends up generating pressure from the side and the play results in an Eagles’ interception.

4. 1st and 10, :52 2nd. Pass protection. It appears that initially, Beachum is able to get into Brandon Graham’s pads first but again, he loses his balance and is walked back into the pocket, a good seven yards backwards. 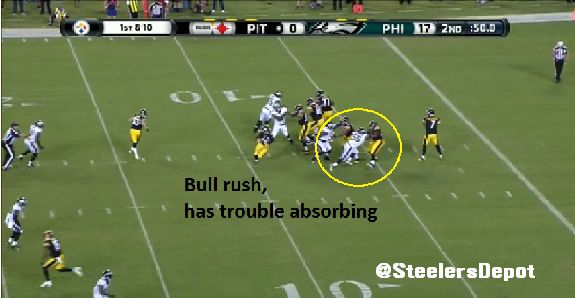 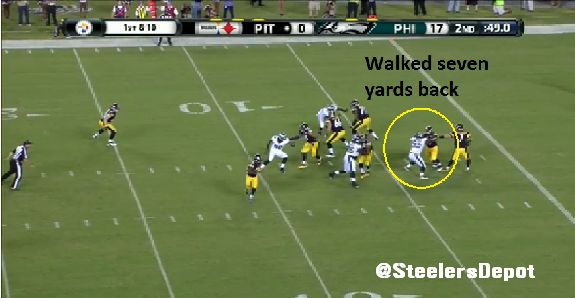 As I’ve preached, handling bull rushes are never pretty. But Beachum gets walked back a little too much here and it forces Ben to move in the face of potential pressure. The silver lining here is that he’s able to stay engaged.

5. 3rd and 9, 13:51 3rd. Graham’s punch gets Beachum turned and knocks him off his base. There is help to the inside but on an individual level, it’s still a poor play. 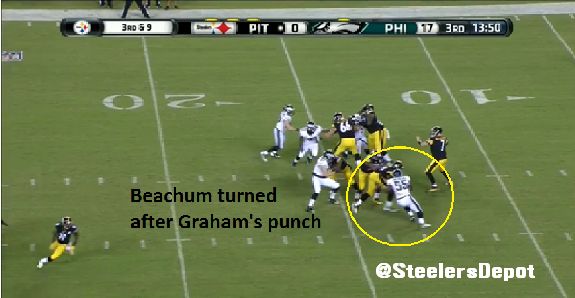 6. 2nd and 7, 12:32 3rd. The SAM linebacker rolls up to the LOS on a run blitz. Beachum ostensibly doesn’t process it quickly enough in time and ends up picking up nobody. It isn’t the true reason for the five yard loss on the play but it didn’t exactly help, either. 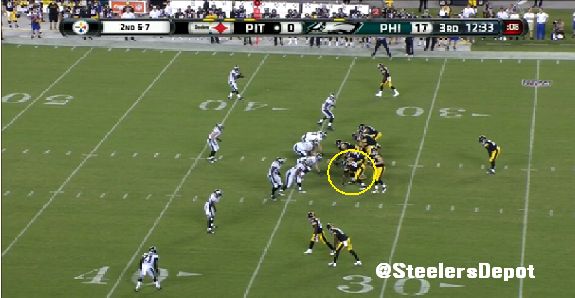 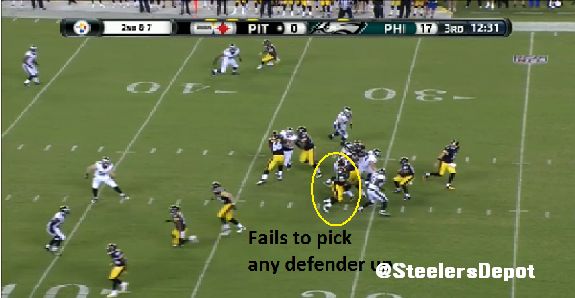 7. 3rd and 12, 11:51 3rd. Same issue as earlier. Feet dead on contact. Graham easily wins. Roethlisberger is forced to climb the pocket and is eventually brought down for a sack.

8. 2nd and 6, 4:14 3rd. For the final time, Graham’s initial punch wins. Beachum is knocked off balance for the fifth time in this section, Beachum looks off balanced. Graham wins inside. 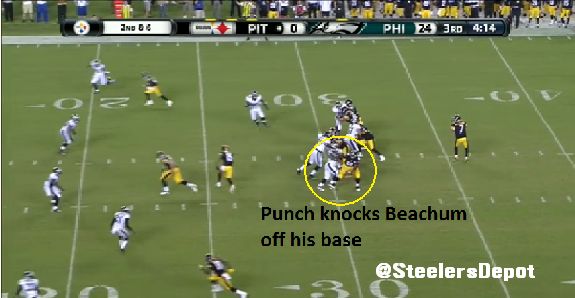 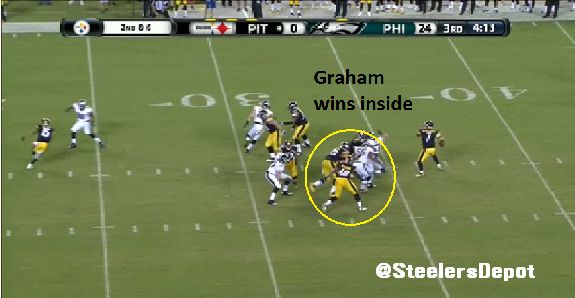 It’s been a difficult preseason for Beachum. He’s struggling with his initial punch and you’re seeing some of the issues playing at a lighter weight presents. He’s more easily moved and taken off his base. A pair of players wearing 55, Buffalo Bills’ defensive end Jerry Hughes and now Graham, have made Beachum really work the last two weeks. I’m sure reps will be few but I’d like to see a strong finish against the Carolina Panthers. Charles Johnson and Greg Hardy are two of the top guys at their position.

The positives is that Beachum doesn’t quit on a play. Because of that and his natural athletic ability, he can recover and is capable of sealing the edge. And while I didn’t touch on it much in this article, overall, his run blocking looked fine.

Certainly don’t worry about Beachum yet, the tape from the last half of 2013 tells you about the level of play he can offer, but I’ll be keeping an eye on him throughout the early portion of 2014.