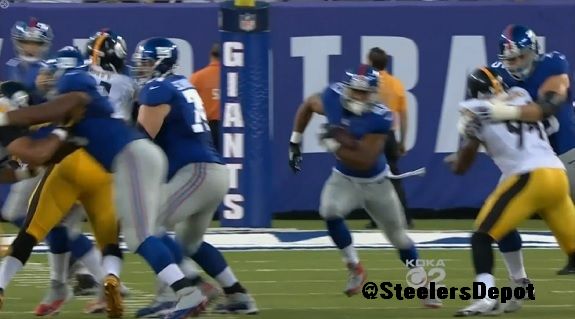 The Pittsburgh Steelers defense gave up quite a few double explosive plays last season and in their 2014 preseason opener Saturday night against the New York Giants, the first-team defense allowed running back Rashad Jennings to scamper 73 yards for a score.

I have an animated gif of the play below and it’s pretty clear that it started with the failure of the defensive line to maintain gap integrity and ended with the secondary being unable to keep it from being a homerun.

Pre snap, the Steelers defense is in their nickel sub package with inside linebacker Sean Spence lining up outside on the left edge. Lawrence Timmons is manning the gap on the strong side of the Giants formation.

This is a power trap play by the Giants as the right guard pulls perfectly and the left side of the Giants offensive line blocks down to the inside on defensive end Cameron Heyward and runs him completely out of the hole. Heyward took blame after the game and said he was too flat on the play. 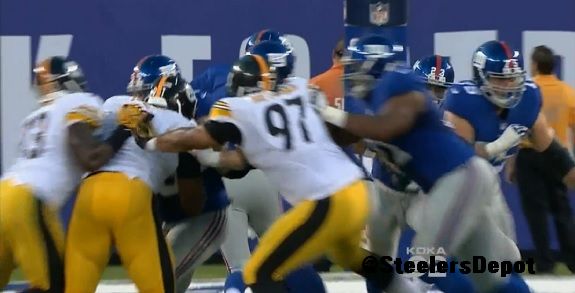 Timmons also missed Jennings, but you can see in the still shots below, the he was clearly held by the pulling guard and Jennings is off to the races. 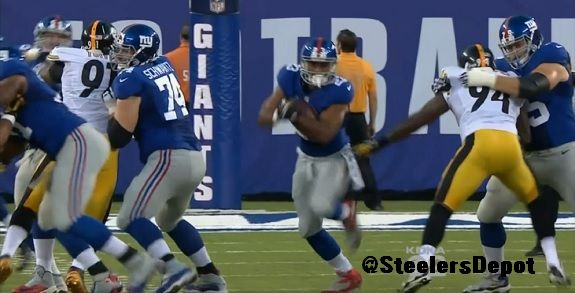 In the secondary, both safeties, Mike Mitchell and Will Allen, took poor angles and thus neither can make the tackle. 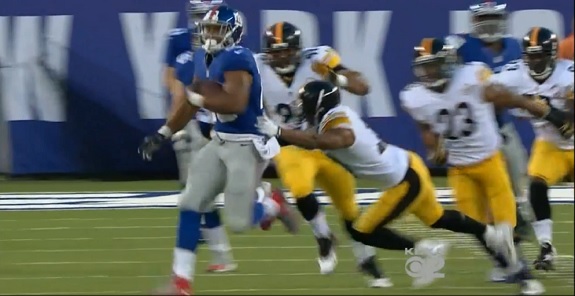 While this play did bust open at the line, the secondary can’t let this go for a touchdown and Steelers head coach Mike Tomlin said as much after the game.

We are going to have runs that breakout every now and there. We’ve got to get it on the ground in the secondary. Sometimes those things break free, they have to be 8, 10, 12 yard runs not 78-yard runs. It was a gap integrity issue in the core. That is less of a concern. I am more concerned about when those things do occur we do a good job of trying to minimize the explosion play and make it an 8, 10, 12 yard gain not a 78-yard play.

As for the Giants take on the play, Jennings gave credit to quarterback Eli Manning.

It was a play that Eli [Manning] made sure we were in the right play. It was perfect. Offensive line beat the double team. A puller came around and put a body to clear the hole and it gave me an opportunity for a one on one. One on one battles, you have to win, and that’s what I did. The rest was just a race.