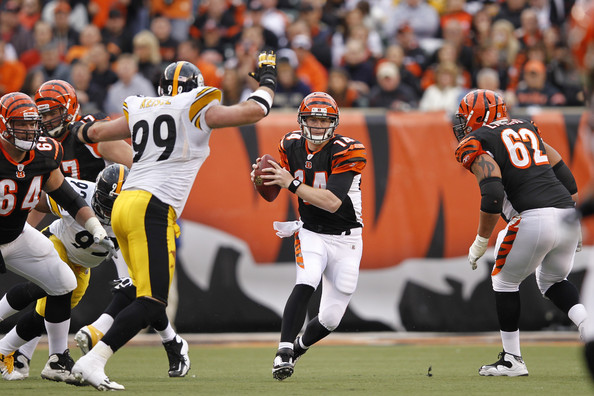 A few days ago, the Cincinnati Bengals gave quarterback Andy Dalton a six-year extension with a base value of all seven years totaling out at $96 million. Dalton can max that deal out to $115 million if he wins the Super Bowl this upcoming season, but I’m willing to bet that he won’t. In fact, as I pointed out in a Tuesday morning post, Dalton could very well wind up being cut after the 2015 season if he doesn’t deliver the Bengals a longer run into the playoffs soon.

The road to the playoffs for the AFC North teams usually goes through the division and while Dalton has led his team to the tournament during his first three years in the league, he hasn’t exactly done it by dominating the AFC North. In the 18 games that he has played so far against AFC North teams, he has compiled an 8-10 record with four of those eight wins coming against the lowly Cleveland Browns.

As you can see in the table of stats below, Dalton has been mediocre at best from a statistical standpoint in the 18 games that he’s played against the teams in his own division. For every touchdown that he’s thrown, he’s almost equaled it with an interception. On top of that, his 56.8% completion percentage and 6.34 yards per attempt are pretty pedestrian. Also, while not shown in the table of stats, Dalton’s career adjusted net yards per passing attempt number is a putrid 5.46.

In order to provide you a means of comparison, I will let you know that Pittsburgh Steelers quarterback Ben Roethlisberger has a 61.6% completion ratio for his career against teams in the AFC North to go along with a healthy 7.16 adjusted net yards per passing attempt number. He also has a much healthier 88.0 outdated quarterback rating.

As the numbers will also show you below, Dalton has made his living by beating teams on his yearly schedule that play outside of the AFC North. His career numbers in those games are even quite impressive. However, in the 30 games that Dalton has played outside of the division during his first three seasons in the league, he’s only beaten six teams that had a winning record at that the time that he played them. In defense of that stat, he’s only played a total of eight games outside of the AFC North during his career that had a winning record at the time that he played them.

Oh, did I mention that his 0-3 in the playoffs?

How will the Bengals and Dalton do in 2014? Being as he has never had a winning record in a single season against teams in the AFC North, it could come down to how he plays in the games outside of the division once again. The Bengals do have to play the New England Patriots, Indianapolis Colts and New Orleans Saints all on the road this season and they’ll host the Denver Broncos in Week 16 as well. One would think that all four of those teams will more than likely have a winning record come the time that he faces them, so they are the ones to circle on the calendar.

If Dalton and the Bengals are to make the playoffs for a fourth consecutive season in 2014, Dalton might have to do it the conventional way and that’s by going 4-2 or better in the AFC North. I think we’ll find out for sure this season if Dalton is the real deal and whether or not the Bengals will be soon looking to get out of the new deal they just gave their quarterback.