In the world of football, October is the month where real men literally wear pink. You can see it on cleats, on banners, on gloves, on towels and on just about anything else the NFL can think of. Perfect marketing. Goes straight to the heart. The issue exists in the notion that the money that fans are spending to “support the cause” is going directly to the source.

In a report by Business Insider, the reality is that less than 10 percent of the money is ever used for breast cancer research: 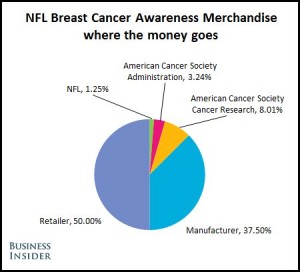 As of the 2011 the NFL has donated $3 million to breast cancer. Seem like a lot? Not compared to the $9.5 billion they pocketed in the same year. The reality that surrounds us is that businesses profit a lot off of selling merchandise that tugs at our heart strings.

I understand that they need to make back the money that they are dishing out for marketing, advertising etc. but in an industry that pockets billions they couldn’t give a little more to a cancer fund? Cut me a break.

It doesn’t help that the NFL is in a “sensitive” state with women currently. Let’s be honest ladies, we are all a little pissed and their inability to take actions against those that hurt us, while being able to suspend players for 16 games for smoking pot.

The moral of the story is that fans should do research before donating any money to a cause. Donating directly to a cause is a good way to ensure the success of your donation, but always be aware of where your money is going.

If you are wondering about the best places to go, bustle.com breaks it down best:

The Dana-Farber Cancer Institute gets a 64.93 (out of 70) rating from non-profit screener CharityNavigator.org, and Susan G. Komen for the Cure gets a 62.54 (although for financial allocations, it gets a lower 59.89). Living Beyond Breast Cancer gets the highest score by far: an overall 68.96, and a perfect score for accountability and transparency. The American Cancer Society, meanwhile, gets just a 46.75, which earns it two stars compared to the full four the other charities got. And on the rating of its financial allocations, the ACS got a mere 37.26: a one star score.

So let’s remember this as the season quickly nears upon us. While it might seem like it’s a good cause, the reality is that it’s just another way for the NFL to make more money. Oh, and of course look like they care in the process.

Because pink cleats really make me forget about everything else.

The Bustle article can be found here:
http://www.bustle.com/articles/7289-the-breast-cancer-nfl-scam-brought-to-you-by-the-american-cancer-society