This will be the last Film Session segment of the offseason. No worries though, we’ll hope back into the X’s and O’s come the first preseason game. Just a little more than a month away.

Really simple concept we’ll show today to close out the sessions, but a staple of Dick LeBeau’s defense.

We’re talking about using stunts to create pressure. The situation: 3rd and 3 for the New England Patriots on the Steelers’ five in a 24-24 game.

The goal here is create pressure without having to bring extra rushers that creates holes in the secondary. Steelers rush just four, allowing them to drop seven and take away any immediate throwing lanes (think slant).

With five blockers, the Patriots have the advantage on paper. So the Steelers stunt.

A stunt can be used in a variety of fashions – and in LeBeau’s defense, you’ll see them all – but the basic concept is universal. One defender loops over the other and the two exchange pass rushing responsibilities.

In this instance, defensive ends Brett Keisel and Cam Heyward (though both are lined up inside, Heyward a 2 tech and Keisel a 2i) loop with Keisel coming over the top through the playside “B” gap with Heyward through the weak “A.” 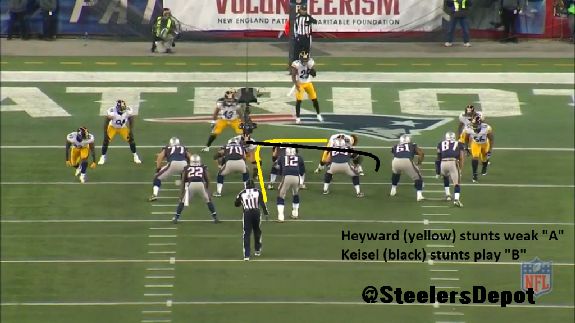 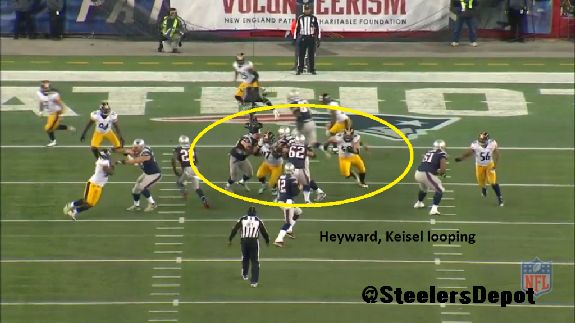 That’s where it falls apart. Keisel is picked up but Heyward is able to penetrate. With Connolly falling off, there’s no way for left guard Logan Mankins to get square to Heyward and prevent him from rushing inside. It’s also odd and poor technique from Mankins, though. He opens his hips instead of staying parallel to the line. 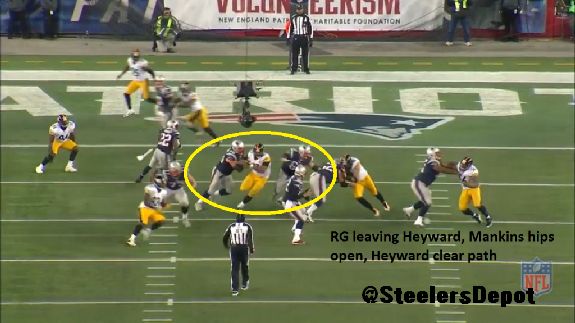 The last thing a quarterback wants to see is pressure from up the middle. Let it come from the outside and the quarterback can climb. If it’s coming directly at you, there’s nowhere to hide.

As Tom Brady begins to turn and probably just concede the play, Jason Worilds pops him and gets credit for the sack. 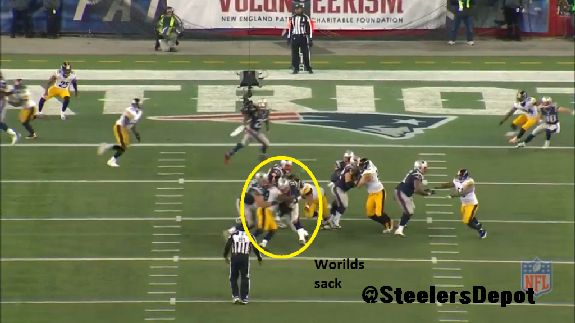 But it was the stunt that answers the “how” to the “what.” I’ve harped on it before but this is such a large goal of any defense, the reason why there’s such a premium on pass rushers. When you can rush the minimum and still quickly generate pressure, you have the makings of a successful defense.

Ideally, the Patriots pick the stunt up by having the left guard get square to Heyward, the right guard doing the same to Keisel, and the center doubles to one side. Instead, you get chaos. The left guard playing with poor technique and the guard and center overlapping that creates extra confusion. That’s the job of the stunt.

Offensive line play is like dominoes. If one falls, they all do. Even if the line has numbers, you’re asking them to show perfect coordination. Tough to accomplish in a matter of a second. It’s why the o-line is truly one of the groups that must “gel” to be effective.

One last thing to look for when predicting stunts, though it isn’t seen here. If a player’s stagger, the way he positions his feet, have changed, it’s a strong indication of a stunt. If a lineman typically has his right foot back and on a particular play his left foot is back, he’s probably apart of a stunt. This is done to make it easier for the lineman to push off of when slanting inside or outside.

Thanks for everyone who read and commented on this series. It’s been fun.