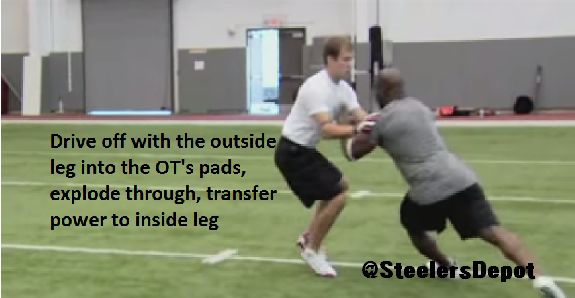 A few weeks ago, we took a purely statistical approach to evaluating Pittsburgh Steelers outside linebacker Jarvis Jones as he enters his second season. Obviously, numbers alone don’t tell the story. Tape is more important than historical data as data doesn’t hold a tangible effect on him. That’s what we’ll accomplish today. If you’ve followed me on Twitter, it’s a similar, but expanded upon, discussion from the last few days.

The best way to look at Jones is to compare him to recent dominant edge rushers the Steelers have created. No one has been better than James Harrison, making him an excellent poster child.

In this video, Harrison describes the technique on a speed bull rush. Start off the edge, plant, and drive into the tackle. It’s barely a minute long and definitely worth the watch.

One of the biggest things to take away here, technique-wise, is this quote: “You take three or five steps, depending on your stride length. On that third or fifth step, plant on that outside foot…”

And of course, that’s demonstrated in the video. Harrison takes five steps – since he’s shorter and takes smaller strides – drives off his right foot to redirect him into the tackle’s pads, and explodes through to the inside leg upon contact, generating enough explosion to walk the tackle into the pocket. Simply, converting speed to power. Also worth noting is Harrison’s ankle flexibility which we’ll delve deeper into later on. 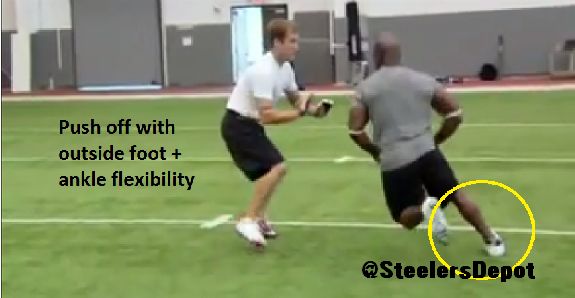 This translates in-game, as seen in this 2012 matchup against the Baltimore Ravens. 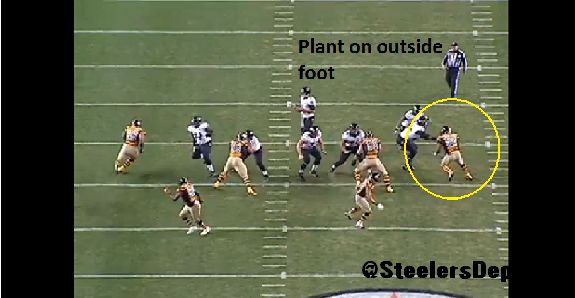 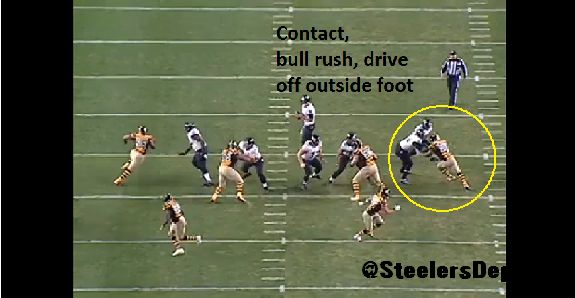 Let’s bring it back to Jarvis Jones. His speed bull rush from last year. Also against the Ravens though choosing them again was purely coincidental.

Instead of planting off his outside foot, Jones drives off his inside. He lands on his right by the time he makes contact with the tackle. 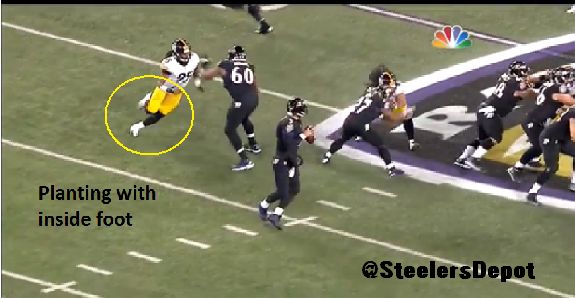 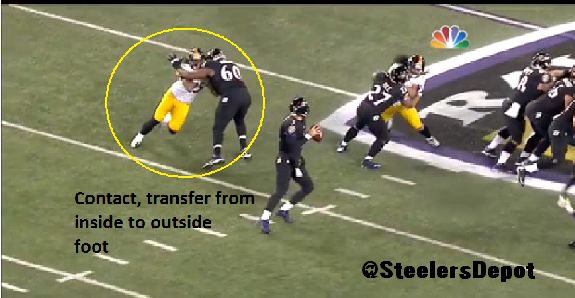 It’s the opposite of what Harrison teaches. Driving off the outside foot – as Harrison states – is where the power comes from. I’m not an expert in this field, but it makes sense that when you step off the inside, it’s difficult to get the outside of your body moving with the inside. Momentum wants to carry it upfield. Stepping with the outside foot, all that momentum goes the same direction, generating more power.

The focus here isn’t on building the upper body strength, and to a degree, not even the lower body. It’s technique, it’s steps. Maximizing the power you do have. Jones is inefficient.

But that is the smaller issue of the two. Technique can be cleaned up, especially for a then-rookie whose head has hopefully stopped spinning.

The larger problem, the one that is much more difficult to correct, is natural talent. Good pass rushers have to have a variety of qualities: an explosive first step, strong, active hands, and a repertoire of moves.

But above all, they have to be able to bend. Dip the tackle, get skinny around the edge, and work to the pocket. If you don’t own that, life is tough.

Harrison again excelled in that category. Being six feet definitely helps when facing tackles that are a half foot taller, but he could bend with the best of them.

Admittedly, “bend” is a bit of a broad term. What exactly are we looking for? We want flexibility in three areas: the hips, knees, and ankles. Listen to Mike Mayock or Greg Cosell before the draft; you’ll hear the term a ton.

Deebo served as an example for all three.

Screengrab of Harrison’s forced fumble/safety against the San Diego Chargers in 2008. Look at the ankle flexibility as he dips past left tackle Marcus McNeil. Flexed at nearly a 45 degree angle, allowing the knee to bend and Harrison to turn the corner, getting upfield and to the quarterback. 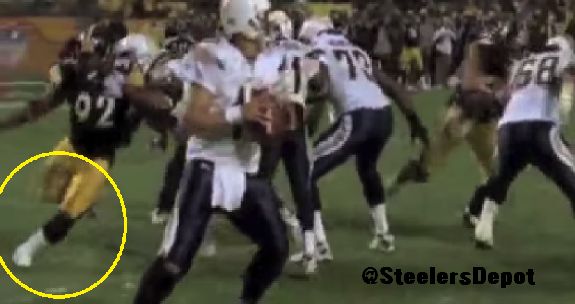 This one is slightly more difficult to see with Harrison at the bottom of the screen but you get a good idea of how flexible his hips were. Look at the bend, which I’ve outlined with the most exquisite tools Microsoft Paints offers me (a curved line). 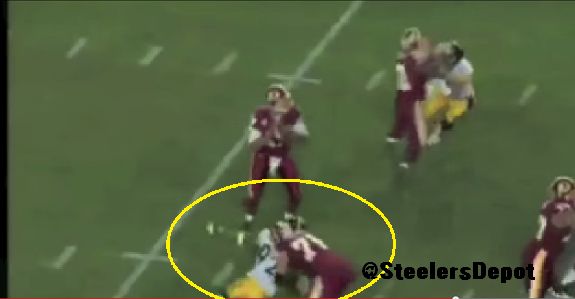 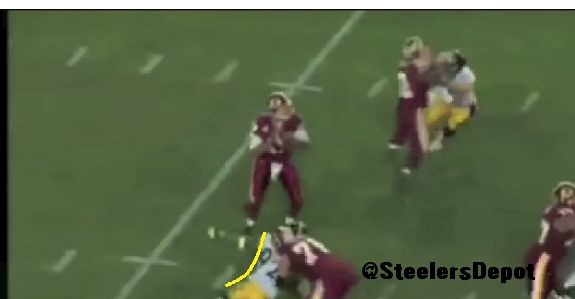 Look at what Harrison causes the tackle to do. He’s forced to bend at the waist, double-over, and lose his own base. Power is generated from a lineman’s lower half. Without that, all he can do is try and shove the linebacker up the arc and hope for the best. It didn’t work very often against the stout, and frankly, dense, James Harrison.

Now let’s compare that to what we saw from Jones, picking out a couple plays from Week 10 against the Buffalo Bills and Week 17 versus the Cleveland Browns.

We’ll begin with one of the late first half plays I’ve highlighted in the past where Cordy Glenn easily pushes Jones up the arc. Look at Jones’ hips in the picture below. He’s upright with inside shoulder exposed. Easy play for the left tackle, who punches the inside shoulder and pushes him upfield. 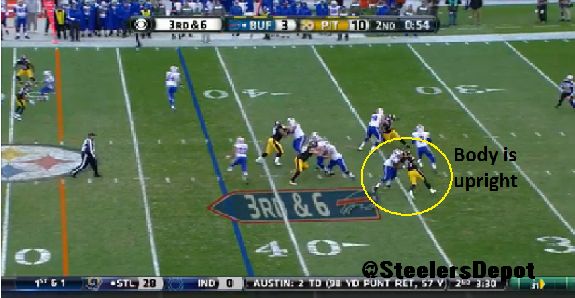 Fast forward to this 2nd and 9 in the third quarter. Jones again trying to dip around the edge. Look at his left knee and ankle. 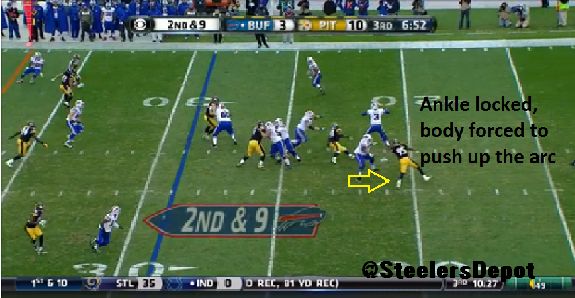 Neither shows flexibility. His lower half never gives him the opportunity to make the turn and get upfield, working to the quarterback. His knee and ankle are locked and it causes him to float upfield.

Flip to Week 17 and we again see Jones struggling. Off the line, he is again upright, the inside shoulder way too high. Hips stiff and locked. 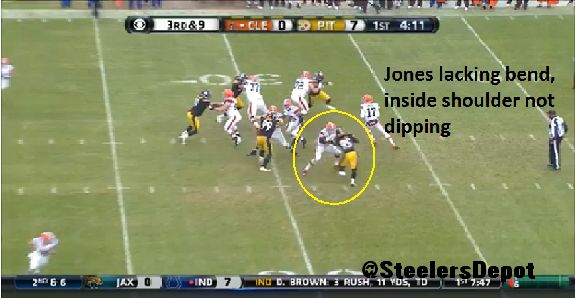 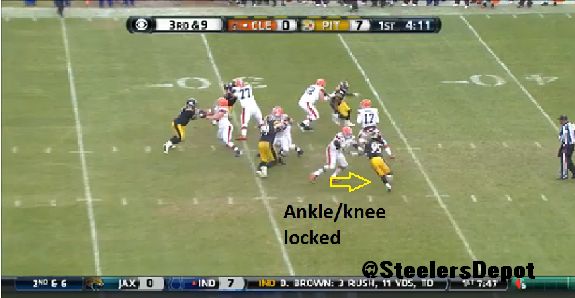 And the last snapshot from the play. 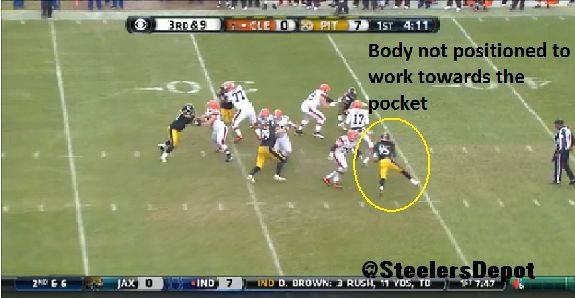 Nothing about his body positioning suggests the ability to turn the corner and work towards the pocket. Left leg locked out, hips stiff. Naturally, he’s a non-factor in the play.

It’s difficult for me to articulate, but I habitually see his outside leg fly out in front of him, possibly getting him overextended. See it in the Bills’ and Browns’ screenshots. That’s likely compounding the problem, making it tougher to turn.

Sure, he’s facing Joe Thomas, but that has nothing to do with Jones’ errors. What Jones is showing isn’t good enough to beat a backup, let alone an All-Pro like Thomas.

One last play and the one that stuck the most out to me. Referring back to the Bills game. Another one of the last first half plays.

Jones and LaMarr Woodley both show the same rush, trying to dip off the edge. Initial steps are identical. 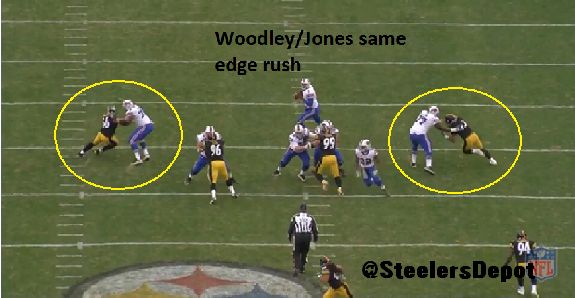 It’s the next step that is radically different. Woodley is getting much better knee and ankle bend than Jones. He’s much closer to the ground. Jones, by comparison, is stiff and more upright. 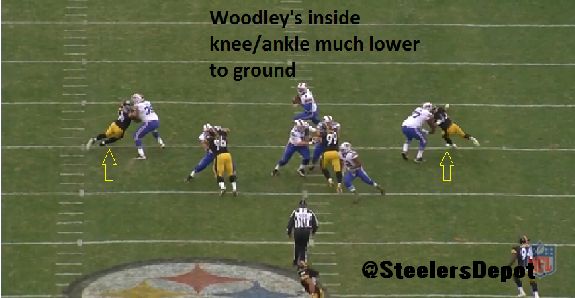 To throw in one final aspect, and one that can be coached up, are counter moves. Both linebackers’ fail to get around the edge. Realizing that, Woodley counters with an inside spin. Jones doesn’t and Glenn calmly pushes him up the arc. 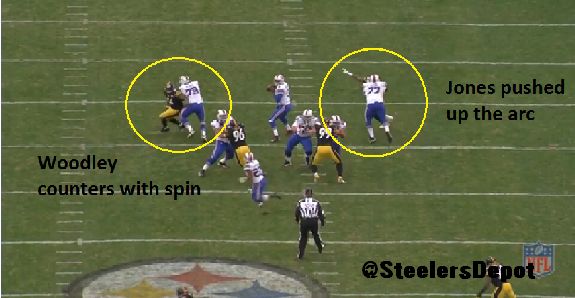 I’ve been asked how much of Jones’ issues can be fixed. Coaching can help but only so much. Similar to an attribute like arm strength, a players’ bend is something that comes naturally more than something that can be taught.

The offseason is over so it’s obviously too late to train, but if I were to give any advice to Jones – as the run of the mill blogger, I realize I’m not the one to come to for solutions – but I’d pick up yoga or heck, pull a Lynn Swann and try my hand at ballet. Something that improves flexibility.

I’m rooting for Jones to succeed as much as anyone. His success is integral to the defense, and it’s near the top of my list of things to watch for during camp and the preseason. But from what the numbers and tape tell me, I’m extremely skeptical.